Many familiar international and local names!
Posted by Bill Brock at 6:40 PM No comments:

Jerry Neugarten reports on the ICA web site.  The inaugural IESA Championship will be in Bloomington on February 18-19, 2011.  It's a two-day event for 5th through 8th graders.

The registration deadline is January 12, 2011.  Registration must be made through the school, and the school must be an IESA member.  Find out more here (pdf document).
Posted by Bill Brock at 4:13 PM No comments:

Another cut-and-paste from my email.  One correction to my earlier post: the under-$100 entry fee for this weekend's tournament is only available to club members: it's $20 more for non-members.  In the weekend tournament, GMs Gurevich, Shulman, and Amanov, and IM Young will be among those representing Chicagoland.

Kasparov and Short in St. Lou after Thanksgiving Tourney

SAINT LOUIS, November 23, 2010 – Grandmaster Garry Kasparov, widely recognized as the world’s greatest chess player, has announced he will be making an appearance at the Chess Club and Scholastic Center of Saint Louis on Monday, November 29, just one day after the conclusion of the Thanksgiving Open tourney featuring renowned GM Nigel Short and an $11,000 prize fund.

Kasparov, who is coming to Saint Louis to deliver a political lecture, will make an appearance at the CCSCSL from 4-5 p.m. The club has arranged a special setting in which club members and the general public can meet and greet the living legend.

Short, who was already scheduled to conduct a special lecture and simul beginning at 6 p.m., will also be in attendance. His lecture is free for club members but will cost the general public $10. The simul, scheduled to follow the lecture at 7:30 p.m., has been capped at 30 participants, but those interested can still submit their name for the wait list.

This is a once-in-a-lifetime opportunity to meet two of the best players in the world, who once battled one another for the World Chess Championship title in 1993.

The festivities follow the largest prize fund tournament ever offered by the CCSCSL excluding a U.S. Championship event. The Thanksgiving Open, which takes place November 26-29, features an $11,000 prize fund, and two-day and three-day options are available to make the tournament easily accessible for all.

In addition to Short, a host of other titled players have committed including:

Registration costs $119 for the three-day option and $118 for the two-day option. There will be a re-entry option available for $60.

Posted by Bill Brock at 2:07 PM No comments:

Posted by Bill Brock at 5:39 PM No comments:

Info here!  The entry fee is under $100 under $120, and the hotel rates are reasonable enough for an impromptu family vacation.  If you're looking for a ride, I might be able to play matchmaker (no warranties, express or implied).

I won't be able to play because of family commitments, but I've extracted an oral commitment (my hopeful interpretation of "maybe") from Claire for 2011.
Posted by Bill Brock at 3:51 PM 2 comments:

Snipped and pasted from my email:

ICA will pay the entry fee for FIDE titled players (FM IM GM WFM WIM WGM) who list Illinois as their residence on their USCF registration.

Free 90 days added to all players' ICA memberships. All they need to do is send their name, section, USCF number and contact details to freemembership@il-chess.org by Feb 28, 2011.

Time control will be Game-60 with a 5-sec delay. All equipment provided. All you have to do is show up, register (or pre-register), and play! --- Register On-line

Posted by Bill Brock at 1:57 PM No comments:

Dr. Nunn's guide for the perplexed

(I haven't gotten around to buying Volume 1

There are a surprising number of subtleties in endings in which a lone rook faces enemy pawns, and here we shall focus on those which are of greatest importance in over-the-board play.

By hesitation check I mean that a piece traveling from square A to square B gives an intermediary check on square C before moving to B.  The point is that if the enemy king is already on its best square, the hesitation check forces the king to an inferior square.  It might seem unnecessary to give a special name to such an elementary concept, but it often helps to have a label to refer to a particular theme.  Hesitation checks play an important role in rook endings and are often overlooked in practice.

Have another go at it!
Posted by Bill Brock at 9:38 AM No comments:

Rook endings (or, the love that dare not speak its name)

If you enjoy rook endings as much as I do, you'll love Nunn's Chess Endings, Volume 2

.  John Nunn's books are always full of top-rate material, but unfortunately, much of it has often whizzed over my head.  (For example: Secrets of Rook Endings

.)  But Nunn has put a lot of work into organizing his mind-bending examples thematically and giving the reader guidance.  The examples are still difficult, but Nunn has never been this reader-friendly before!

For example, here are the first three diagrams in Nunn's book: 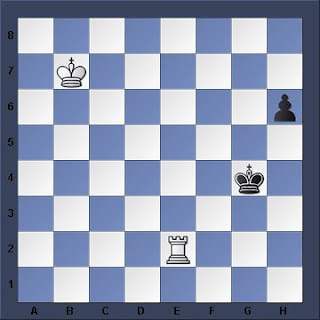 Fries Nielsen-Plachetka, Rimavska Sobota 1991
White to play and win
Usually when I get such a position, I have three minutes left on the clock and am reduced to counting on my fingers: "I go here, he goes there, I go here..." 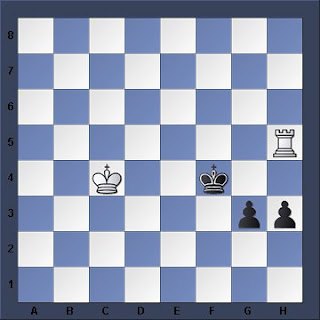 Analysis diagram
White to play and draw
Hey! Didn't I learn in one of my beginners' books that two pawns on the sixth rank always win against an unassisted rook?  And indeed, 1.Rxh3? does lose.  Why?  And where's the darn draw? 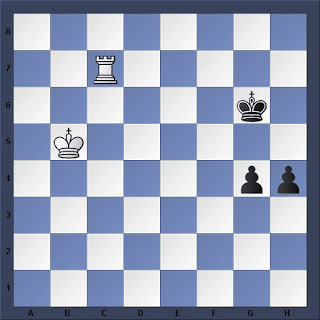 Penrose-Perkins, British Championship, 1972
White to play and draw
I found the first position hard and the third position mind-numbingly difficult.  Back with Nunn's guidance in a little bit.

I always learn a lot from Matt Pullin's videos on endgames. He relies on his brain, not a computer engine or database, and he's a very good explainer.

But it just so happens that James Fagan and I had this very ending in 1997. I think Matt misses a win for Black at one moment in his video.


You really should be subscribing to Matt's YouTube channel, GreenCastleBlock!
Posted by Bill Brock at 6:48 AM No comments: 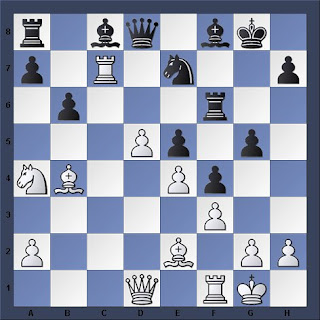 Mark Taimanov-Larry Evans
USSR-USA match, New York 1955
Black to play
Taimanov has just sacrificed material with 19.Rxc7.  If Black plays the natural 19...Qxc7, White plays the powerful 20.d6.  What to do?
Kavalek annotates this beautiful win by Evans.
Posted by Bill Brock at 6:08 AM No comments: