Evanston Double Blitz on the day after Christmas

If you've already bookmarked the ICA tournament calendar, you wouldn't have to click here for the details.

Posted by Bill Brock at 8:13 PM No comments:

Posted by Bill Brock at 7:03 AM No comments:

Unrated event at Temple Judea Mitzvah in Skokie on Sunday!

Posted by Bill Brock at 8:09 PM No comments:

Well, we can't play Christmas Day, can we?  Details here!

Posted by Bill Brock at 8:06 PM No comments:

Email ThisBlogThis!Share to TwitterShare to FacebookShare to Pinterest
Labels: Kumbaya

I was at a Christmas party in Evanston last night, and spoke for a few minutes with Joel Berez of the Internet Chess Club last night.  Joel explained to me that World Chess Live is intended to be a family-friendly, beginner-friendly companion of the ICC.

I've heard nothing but good things about World Chess Live, so if you're looking for a place for you or your children to play online, I encourage you to check it out!

Posted by Bill Brock at 8:01 PM No comments:

Posted by Bill Brock at 7:54 PM No comments:

I've already mentioned the awesome sauciness of iTunes U: there's a lecture series of special interest to chess players (and business and science and poker folks): Ben Polak's Introduction to Game Theory.  You don't need iTunes to access this content.

This gives me an excuse to recycle my chess-meets-Freakonomics story (an earlier version was told on the ICA message board last year).

Memorial Day Weekend 2008: I was walking around the lobby of the Westin Chicago North Shore in Wheeling, waiting for the round one pairings of the Chicago Open.  A grad student from the U of C School of Business waves a copy of Stephen Levitt's Freakonomics at me, explains that she's taking a course with Prof. Levitt, asks me if I was rated over 2000, and whether I wanted the chance to make some money in an experiment.  "Sure."

is a very entertaining book on economics in nontraditional settings: it's a fun read, and you can get a taste of Levitt's approach to the world from his blog.)

Between rounds, I'm taken to a hotel room & seated at a computer terminal with a proctor there to read me instructions.  I was told that I would be playing against another ELO 2000+ guinea pig in another hotel room (that's what I was told: I don't know this for a fact).  My moves in all games were sent by computer, and my opponent's moves were communicated to me by the proctor.

In game 1, player 2 simply picks a number that will bring the running total to 10, 20, etc. I immediately grumbled to the proctor that I was handed a lost position; she smiled & continued reading the instructions. Once I realized that player 2 understood the correct strategy in game 1, I tried to resign; the proctor asked me to play on. I kept choosing "1" to suggest to my unseen opponent that I knew s/he knew that s/he would win by force.

The winning move is Game 2 is for player 1 to choose "1" as the first move, then bring the running total to 12, 23, etc., with the subsequent moves (because 1 + [9 x 11] = 100). I suspect that these first two games were intended to be trivial, to make sure the chess players were capable of thinking in a certain mindset, and perhaps even to trick us into thinking in that mindset.

Which brings us to Game 3.

Game 3:  Again, I am player 1.  Each player can make a maximum of three alternating "moves" each: the moves are simply "Continue the game" OR "Stop the game."  Whatever Player 2's decision on Move 3, the game ends.

There is a certain logic to stopping the game immediately, taking the $4 for Game 3 (plus whatever earlier winnings one had), and saying goodbye.  In fact, I later found out that that's what NM Owechukwu Iwu did when he was Player 1 in this game.  (And he's beaten me in two consecutive Chicago Opens, so he knows a little bit about games.)

It is my strong personal opinion that (given this particular payoff matrix), this extremely logical analysis is sub-optimal because we're not playing a zero-sum game.  In fact, the University of Chicago Grad School is injecting cash into the game with every move.  (After a very long pause, I moved "continue".  The game concluded: Player 2: "continue," Me: "continue"; Player 2: "stop."  So I lost and received $8 for Game 3; while my opponent received $32.


What do you think the grad students were looking for?  And why were they testing chess players?

Posted by Bill Brock at 6:51 PM No comments:

Cheers in Chicago for Gelfand The French have a word for it


What is White's best move in the above position?  (It is not often that a move is so bad that double question marks magically appear on the chessboard.) The other kind of trébuchet: useful when besieging enemy fortresses
(but I don't see the resemblance)

Young is a First Team All Star

Congratulations to IM Angelo Young of the Chicago Blaze for being named an all-star in U.S. Chess League's first team. The league has first, second, and third all-star teams, and Angelo is Board 3, behind GMs Hikaru Nakamura and Boris Gulko, on the first team. With NM Eric Rodriguez on board four, that's one heck of a team.

This comes as no surprise whatsoever, of course. Angelo was undefeated in six USCL games this year, extending his undefeated streak from the 2008 season. He's never lost a USCL game.

It's hard to find anything new to say about Angelo's extraordinary performance that hasn't been said before. He won the league Upset of the Week prize twice (a record), and won a game on Board 1 against a much higher rated player in a match where Angelo was filling in at the last minute for a sick teammate. Amazing.
Congratulations, Angelo!
Cross-posted from the Chicago Blaze blog.
Posted by Tom Panelas at 12:08 PM No comments:

chess on the iPhone (part 1)

Back in the 1980s, I was embarrassed when I started routinely losing to computers.  Now I lose to my telephone, and it doesn't bother me that much.

Although I've lived my entire geek life in PC-land, I am a big fan of the iPhone.  The lectures on iTunes U are in my opinion enough to justify the two-year additional cost of ownership.  Having said that, I don't think the iPhone is an essential tool or even a particularly useful tool for chess players.  (They do make cheating on the toilet easier, so perhaps they are already de rigueur among a certain subset of World Open participants.)  But if you've already drunk the Apple Kool-Aid, there are a couple chess apps that are nice to have.  I thought I'd tell you about the ones I have.

ChessClock (Samuel Kass) is one of several chess timer iPhone apps.  It's not really suitable for tournament play.  No iPhone app ever could be, as the touch screen doesn't give you tactile feedback  (Nothing is more annoying than double-checking that you successfully stopped your clock in a time scramble.)  But you can put the iPhone in airplane mode, turn off the volume, and use it as an emergency tourament clock.  I've done this a couple times in the past year: it's acceptable for that limited purpose. 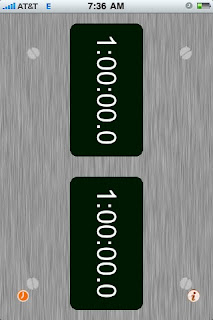 The clock is also the clock button!
There's also an "analog" mode: cute, but not very useful. 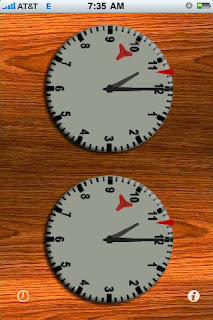 I play chess, so I'm not totally dense.  But I'm also one of those over-50 people who has delegated control of home entertainment systems to the teenager in the house, and I am intimidated by the non-intuitive methods of setting certain chess clocks.  ChessClock shines in this regard: it supports Fischer, Bronstein, and "USCF" (andante) modes (Bill Smythe explains the differences here) for any increment between 1 and 59 seconds. 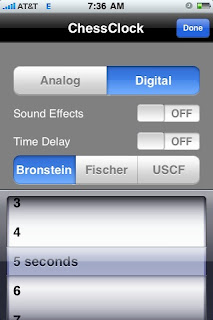 There is no handicap option for giving one player a larger increment, but one can easily give one of the players more time in the main time control.  The settings are simple and intuitive. 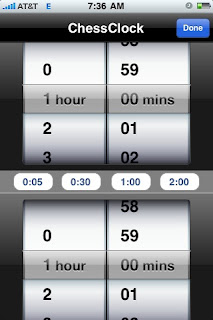 You can only set the clock to the nearest minute, but the digital display gives you the nearest tenth of a second.  Strange.

The price is right at $2.99: it's fine for casual rapid play (or family Scrabble games), and when the iPhone is fully charged, it can be used as an emergency substitute for a round of tournament play.  It won't work for blitz play because of the tactile feedback problem.  But if you use the app once, it pays for itself.  Recommended.
Posted by Bill Brock at 6:53 PM No comments:

Congratulations to Grandmaster (and reigning Illinois Open Co-Champion) Mesgen Amanov, winner of the top section of the 2009 Illinois Class Championships with a solid 3.5-0.5 score.  International Master Angelo Young, FIDE Master Aleksandar Stamnov, and Class A player Michael Chen of Michigan tied for second, each with 3-1.

Here are the full results from the U.S. Chess Federation's Member Services Area (MSA).  (Click on the image below or the preceding link to get a legible copy.) 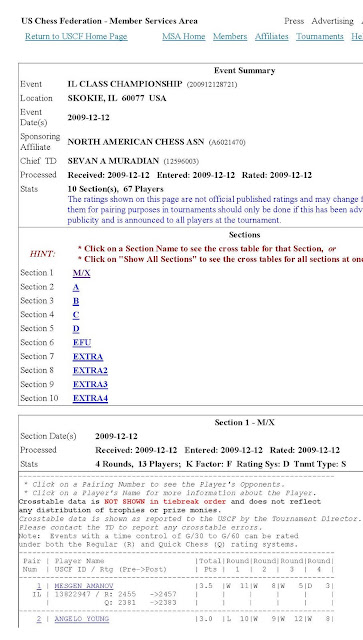 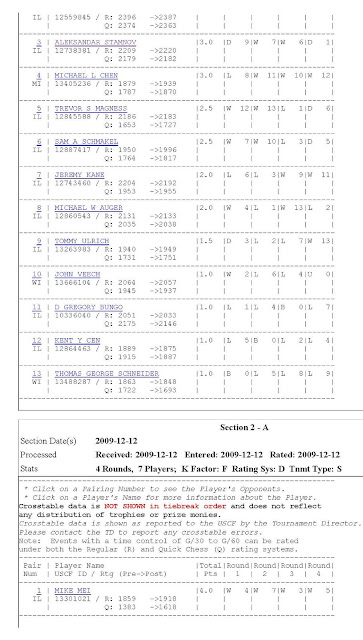 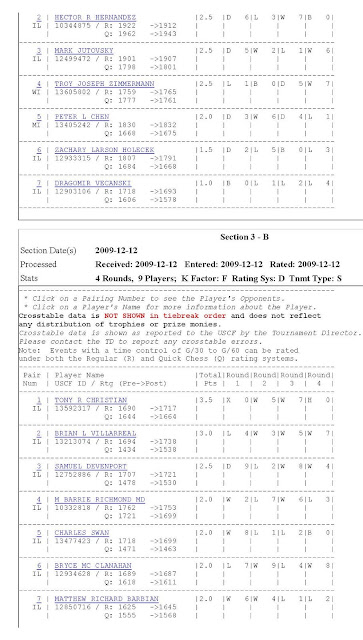 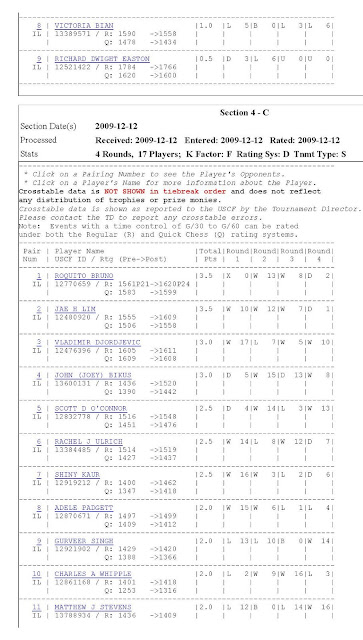 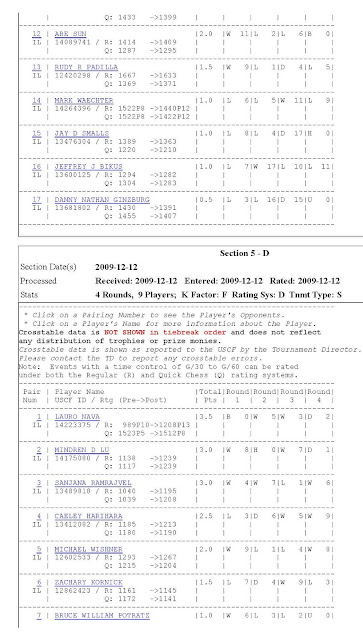 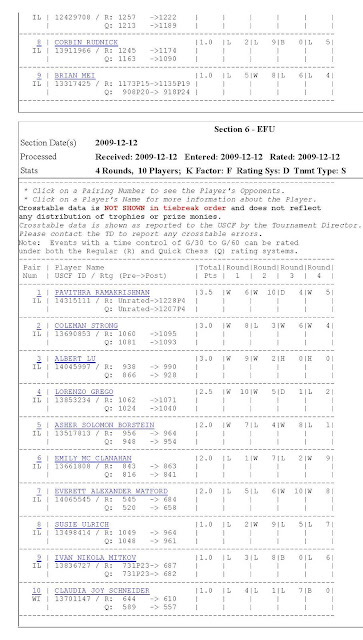 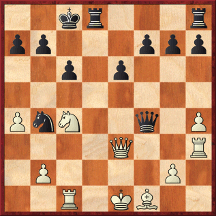 Black to play and win

Dvoretsky's problems typically make my head hurt. But I did (farily quickly) score 75% on the first four: the only one I missed was the one I'd seen before!

One more blitz game to go? You can follow the action here. (The London Chess Classic games are being broadcast on the same site.)
Posted by Bill Brock at 10:14 AM No comments: 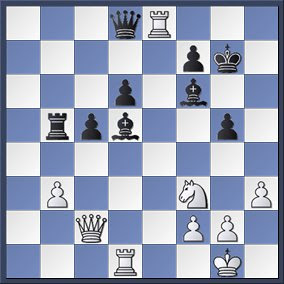 Posted by Bill Brock at 8:58 AM No comments:

Bad pun alert: Knights in the Morning. We're told it's beginner-friendly!
Posted by Bill Brock at 7:06 PM No comments:

Email ThisBlogThis!Share to TwitterShare to FacebookShare to Pinterest
Labels: Wheaton 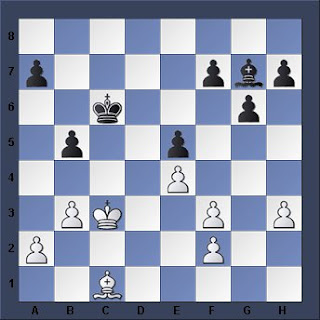 
Please consider the following notes provisional: I'm still not quite sure what's going on in this ending.

Every pawn ending starts as something else: in this case, a bishop ending.  In the diagrammed position, I thought I was slightly better despite the doubled f-pawns because the e5 pawn restricts the Black bishop's scope.  I should have been more worried about my kingside pawn structure.  My f2 pawn is on a dark square and part of a doubleton.

Is this king penetrating towards victory? Or is it hopelessly offsides? 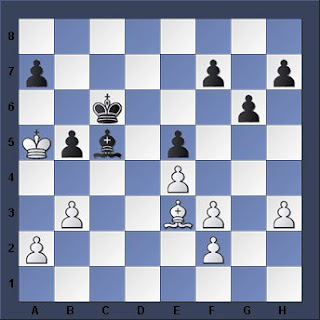 I should have sacrificed a pawn to stay in the bishop ending with 30. Bg5!? 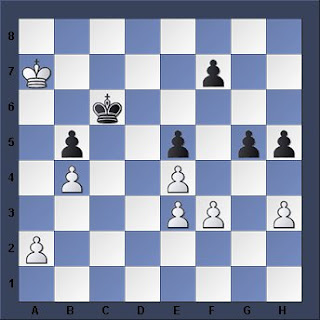 33...f5! is a beautiful breakthrough combination: if White takes the f pawn, then 34...e4! deflects the f3 pawn, after which the g5 pawn runs free. 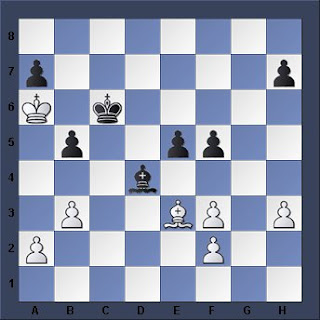 I completely overlooked this strong and natural move (the b4 pawn paralyzes both a2 and b3). 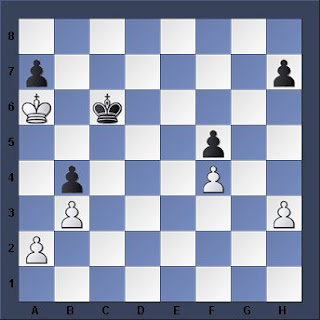 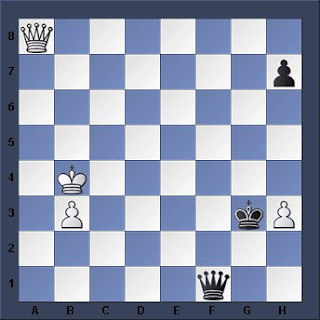 Analysis position: Black to play (looks like a draw)

Back to the game

Posted by Bill Brock at 3:10 PM No comments: