Yet another trap in the Englund Gambit

The Englund Gambit (1.d4 e5?) is one of the weakest responses to 1.d4. It is nonetheless very trappy and requires exact play from White. One of White's strongest responses is 2.dxe5 Nc6 3.Nf3 Qe7 4.Qd5! Black is likely, sooner or later, to have to sac a pawn with ...f6, for probably inadequate compensation. See Stefan Bücker's article Visiting Planet Englund for more details. Much weaker, however, is the immediate 3.Qd5, which tends to lead to disaster after 3...f6! Here Black, who has not had to misplace the queen with ...Qe7, gets strong compensation. Below is an example. After 7...Nd4, White was already defenseless against the threats to his queen and c2, e.g. 8.Qd3 Bf5; 8.Qa4+ b5; or 8.Qe3+ Ne4. White's choice, 8.Qc3, allowed a simple tactical shot, winning White's queen for just one minor piece.

Posted by Frederick Rhine at 10:24 PM No comments:

Kramnik beats Carlsen in round 1 at the Bilbao Grand Slam final (Shipov's round one notes are here).  Neither of the preceding links are permalinks: they'll go stale shortly.

Here are the top six players in the world per the Live Ratings list.  The world champ Anand could easily reclaim the top spot by the end of this event.

Posted by Bill Brock at 3:21 PM No comments:

War is over, so play chess

Eating chocolate cake in a bag? "Play it By Trust"
Yoko Ono, 1999
John Lennon's 70th birthday is Saturday; it's also National Chess Day.  All the more reason to check out the opening of the North Shore Chess Center.

It has been hinted to me that the following interview with Amanda Mateer of the University of Arizona would be a good one to post for the occasion!

Well, at least he got the announcement out more than twelve hours in advance!

After many weeks of planning, the North Shore Chess Center will celebrate our Grand Opening on Saturday October 9, 2010. This day also happens to be National Chess Day (not to mention my youngest daughters birthday!). For this special occassion we have a number of activities planned, open to everyone free of charge.

To kick things off, Mr. George Van Dusen, who is the Mayor of Skokie, will cut the ceremonial ribbon to help inaugurate the Chess Center. Mr. Van Dusen has been very supportive of chess in Skokie having also done the ceremonial pawn push at the Chicago Blaze inaugural match 2 years ago. The ribbon cutting ceremony will take place at 10:30am.

Our next chess adventure leads us to a 30 board simul by Grandmaster Mesgen Amanov, who has just returned from the 39th Chess Olympiad in Khanty-Mansiysk, Russia where he played 1st board for his native country of Turkmenistan. This simul is available on a first come, first seated basis. Make sure you're there for the ribbon cutting to get your spot! The simul will begin between 11:15 and 11:30am

The third activity of the day will be a G/15 + 10/sec increment quick rated chess tournament. USCF membership will be required for this. This will be a 4R-SS tournament. The tournament will begin at 3pm

On Sunday October 12 beginning at 1pm we will host a 4R-SS Game/30 + 30/sec increment tournament. USCF membership will be required.

The address of the North Shore Chess Center is 5500 West Touhy Ave Suite A, Skokie, IL 60077. You turn on Linder Street from Touhy. The parking lot entrance is on Linder, but the Chess Center faces Touhy. We are directly across the street from Pet Smart. We are about 3 blocks west of the Holiday Inn on the same side of the street.

Posted by Bill Brock at 5:40 PM No comments:

All events are free this weekend!

Check for details at the North Shore Chess Center's site.
Posted by Bill Brock at 12:30 PM No comments: 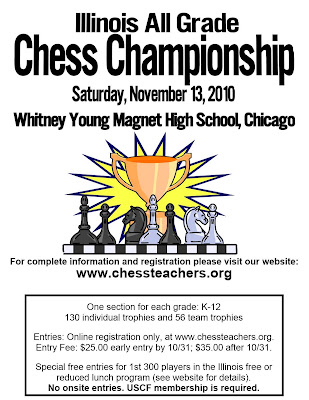 Details on the ICA Tournament Calendar!
Posted by Bill Brock at 5:41 PM No comments:

Email ThisBlogThis!Share to TwitterShare to FacebookShare to Pinterest
Labels: 2010 Illinois All Grade Championship 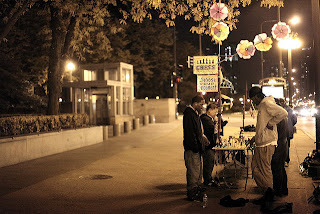 Photo Jaedub: some rights reserved under Creative Commons
Posted by Bill Brock at 1:49 PM No comments:

1.  My wife and son hate The Dave Matthews Band; I'm more indifferent.
2.  Said wife and I were waiting at a Thai restaurant for said son on September 17, 2010 (our last dinner together before he left town).  He was delayed because he & his guitar case couldn't get on a Red Line train packed with obnoxious fans going to see the concert at Wrigley.
Now that I've vented: some blog reader might enjoy tracking down one of these posters as a collector's item. 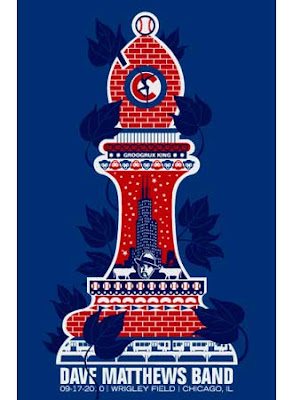 Mark Weeks's blog (where I saw this item) has some interesting posts on chess collectibles.
Posted by Bill Brock at 1:28 PM 4 comments:

About this event:
Whether you want to improve your game or simply learn how to play, join us for this weekly after-school program led by volunteer Mark Hirsch.  No registration required.

The sleep-deprived Hikaru Nakamura led St. Louis to victory, as the other matchups were drawn.

More coverage to come...but not tonight!
Posted by Bill Brock at 10:37 PM No comments:

The cheapo as art form

In US English, "cheapo" is a mildly derogatory term for a cheapskate.  In chess circles, however, it means something different: a tactical trap that both players should be able to see through.
For example, "I was winning, but I fell into a cheapo." Setting a cheapo is not at all cheap: a strong player may set dozens of "simple" tactical traps during the game: miss one and you're dead.  We all feel silly when we fall for a cheapo, but there's nothing unsportsmanlike about setting up a cheapo.
Of course, if there's a much better move to be made, one should make the best move on the board.  But if one can set devious little traps for one's human opponent while making good moves, so much the better.

Here's an example from a game that finished just a few minutes ago.
GM Dmitry Gurevich of the Chicago Blaze had a dubious position against GM Hikaru Nakamura, and was down almost an hour on the clock to boot. But Dmitry fought back to equality. Then, with less than five minutes left on the clock against one of the world's best blitz players (and perhaps the world's best player of "bullet" chess), Dmitry fell for a cheapo.... 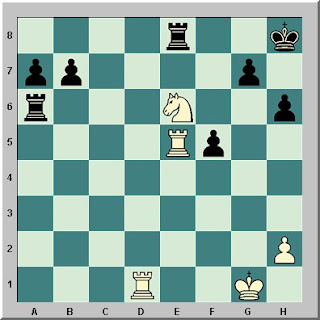 P.S. Matt Pullin questioned my word choice. Is it fair to call a simple trap set by a good move (perhaps the best move on the board) a "cheapo"? Or should "cheapo" be reserved for traps set by inferior moves?
Posted by Bill Brock at 9:22 PM 3 comments:

But hey, Aaron Sorkin suggests that Facebook was stolen....


The Chicago Blaze takes on St. Louis tonight live at 7pm! Board 1 Features GM Hikaru Nakamura vs GM Dmitry Gurevich. Board 2 has returning Olympiad making his Blaze Debut GM Mesgen Amanov against GM Ben Finegold (who has had the unfortunate pleasure of 6 out of 7 blacks this season!). Board 3 sees Kansas City IM Michael Brooks playing... against Chicago's own Flying Florin Felecan. Board 4 sees a rematch with colors reversed of WIM Cindy Tsai against Spencer Finegold (Cindy won the previous encounter as black see NM Jeremy Kane's excellent analysis of the game here: http://www.chicagoblazechess.com/2010/09/the-other-blaze-game-of-the-week/

The last match against St.Louis ended in a draw as St.Louis' 3GM lineup was held to a 2-2 score. But since then, the Chicago Blaze has caught FIRE! We are currently leading the standings for West Division and hope to remain there when the fire settles tonight! GO BLAZE!!!!

Posted by Bill Brock at 2:10 PM No comments:

Someone associated with the Blaze (no, not a player!) was noting the probable absence of Nakamura & Shulman (both coming home from Siberia) and confidently predicting another victory.


Or stop by the North Shore Chess Center at 5500 West Touhy Avenue, Suite A, in Skokie.
Posted by Bill Brock at 2:03 PM No comments: His last two columns feature games of Efimenko and Ivanchuk.  Good stuff!
Posted by Bill Brock at 9:50 AM 1 comment:

A problem for the morning

So what would you do if you were given two consecutive moves?

White makes two consecutive moves in this position
The first move cannot be a check
The second move must be checkmate
If you're stumped, be concerned: the problem is from a beginner's book!
Answer in this review.  (Permalink not available yet.)
Posted by Bill Brock at 6:48 AM 4 comments:

Monday, October 4, 7 p.m. - 8 p.m. Harnish Program Room, Algonquin Area Public Library, 2600 Harnish Dr., Algonquin, IL Tel: 847-458-6060
Chess players in grades 2nd-8th are invited to practice their game in a friendly environment. Various skill levels are welcome to compete. If you have a chess board, please bring it along.

Posted by Bill Brock at 4:07 PM No comments:

I'm sure you were all following the Turkmenistan-Zambia match

Local GM Mesgen Amanov (a dual national) was playing Board 1 for Turkmenistan, and had a solid event.  But Stanley Chumfwa (FIDE 2315) plays a wonderful game to lead Zambia (initial ranking: 121st!) to 47th place.
Posted by Bill Brock at 1:50 AM No comments:

More results at the official site.  And here are a few wrapups around the web:

ChessBase (Check out the crucial game Svidler-Salgado, in which the young Spanish GM spoiled Russia's chances for gold.  It's also featured by GM Yermolinsky at chessclub.com.)

The Week in Chess
Posted by Bill Brock at 1:40 AM No comments: