Details on ICA website!
Posted by Bill Brock at 8:45 AM No comments:

A trap in the King's Indian

Posted by Frederick Rhine at 11:46 AM No comments:

Details here!
Posted by Bill Brock at 8:43 AM No comments:

,Sponsored by the Kasparov Chess Foundation and Renaissance Knights.  Details on the ICA Tournament Calendar!
Posted by Bill Brock at 8:40 AM No comments: From Crestbook, via Chess in Translation.
Posted by Bill Brock at 8:31 AM No comments:

How to beat Nigel Short in a simultaneous 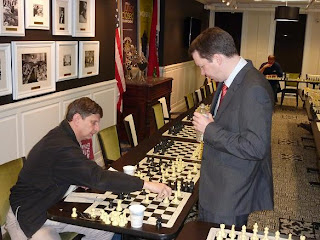 This article is currently available to USCF members only: it will be available on the ICA website next month.
Posted by Bill Brock at 11:53 AM No comments:

It's not *billed* as a Hannukah tournament...

On Sunday, December 5th, Chess Scholars is holding a K-8 tournament at the Solomon Schechter Day School in Skokie.

Details on the JUF website!
Posted by Bill Brock at 9:42 PM No comments:

"A big feast of chess over Turkey Day weekend"

A report on the amateur closed round robins at the North Shore Chess Center from TheChessDad.com.
Posted by Bill Brock at 9:34 PM No comments:

a cool and free iPhone app

Any chess player (absolute beginner to master) with an iPhone, iPad, or iPod Touch should enjoy Chess Problems, a free application by PsyGames.

The interface is simple and intuitive.  One can choose from directmates (e.g., "mate in two moves"),  helpmates, and selfmates, sorted by level of difficulty (pawn to queen) 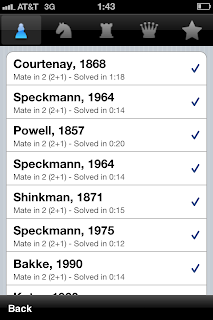 I knew the answer to the following one right away because my grandmother owned a mid-nineteenth century edition of Hoyle.  The chess section gave this problem (or one like it!), accompanied by a version of the legend of Princess Dilaram. 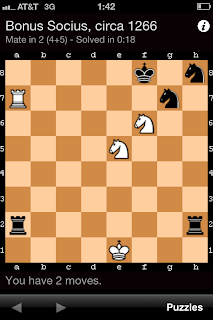 Bonus Socius manuscript, circa 1266 (!)
White to play and mate in two moves
Helpmates are fun!  In a helpmate in two moves, Black moves first, and the two sides work together to allow White to checkmate Black on White's second move. 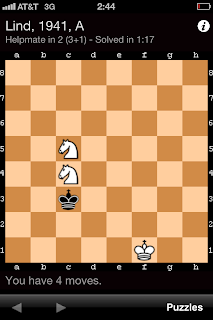 Lind 1941
Helpmate in two moves
(remember that Black moves first in a helpmate!)
Selfmates are fun, too! 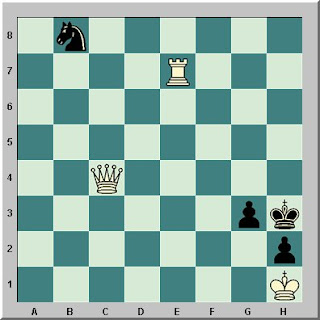 Widlet, 1982
Selfmate in two moves
(White to play and force Black to checkmate White on Black's second move: unlike the helpmate, the two sides are not cooperating)
Some of the positions are easy enough for absolute beginners to solve.  But the simple king and queen vs. king position below took me 1:18 to solve.  I guarantee that anyone who knows the rules of chess and has a little patience should be able to solve it.  Some of you will see the solution at sight, others might need five minute to explore all the possibilities. 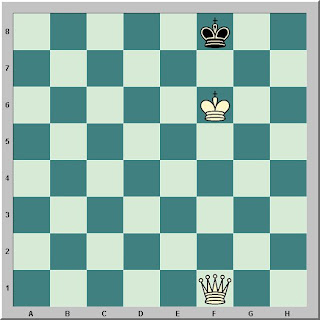 Courtenay, 1868
White to play and mate in two moves
And I sat staring for almost 17  minutes at this famous Mansfield two-mover even though I knew I'd seen it before.  As soon as one sees the key move, one slaps one's head and says, "Of course!"  But the trick is to find the key move...

I think that chess problems are of more than marginal benefit to practical players: they force us to understand the powers of the pieces, they push us to think outside the box, and they train us in brute-force calculation in bizarre positions. 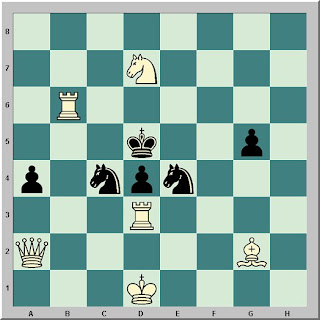 Mansfield 1933
White to play and mate in two moves
I have one trivial complaint about this app.  When you find the key move, only one defense is offered, no matter how many times you play through the solution.  (Part of the beauty of these problems is that various defenses to the key move lead to various mates.)  But that's a quibble.

Jon Burgess reports on the ICA website!
Congratulations to Matt Pullin (the runaway winner of Group A), and to Aakaash Meduri, Sam Schmakel, and James Wei, the joint winners of Group B.
Posted by Bill Brock at 1:57 PM No comments: