I knew it would happen eventually and this weekend Robert Moskwa upped his rating to 2017 to overtake my 2011 by going 5-1 at the North Shore Chess Center G60 tournament including a final round win over 2086 rated 7th grader Alex Bian.  The turning point came in the following position. 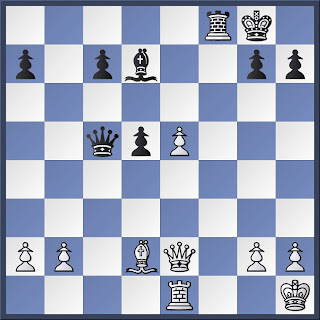 Playing the White pieces, Alex made the perfectly understandable decision to give his king a little breathing room with 22.h3?!  Unfortunately, this gave Black the opportunity to take the intiative with 22...Rf2 whereupon White allowed Black to activate his bishop with tempo by 23.Qd3? Bf5.  Ten moves later, White found himself in the following untenable position. 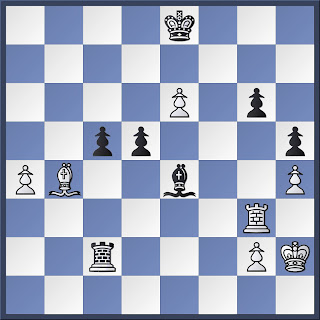 Technically material is even, but Black's active pieces and connected passed pawns give him an overwhelming position.  The funny thing about bishops of opposite colors is that they are extremely drawish when there are no other pieces on the board, but when you add rooks, they can become a huge advantage for the player with the initiative, almost as if he was playing with an extra piece since he can attack on squares that his opponent cannot adequately defend.