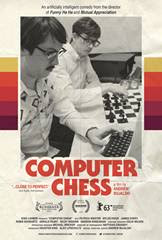 Computer Chess is coming to Chicago next week! An official selection of the 2013 South by Southwest and Sundance film festivals, Computer Chess is "an artificially intelligent comedy" (not, repeat not, a documentary) about computer chess programmers, set in an Austin, Texas, hotel over one weekend in the 1980s during a tournament for chess software programmers. It's been rated 86 percent fresh by Rotten Tomatoes and received an A− from AV Club (which is notoriously stingy with its grades).

I don't get it. This was perhaps the worst movie I have ever seen, and I've seen Manos - The Hands of Fate. My friend Ed Alfonso had the same reaction. Horrible beyond belief.

Roger Ebert, in one of the last reviews he wrote, gave the film two stars. He wrote, "As an achievement, 'Computer Chess' is laudable. As a film, it's missable." http://www.rogerebert.com/reviews/computer-chess-2013