Example 3—Now we come to two Bishops and King against King. 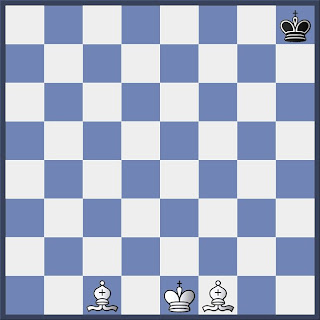 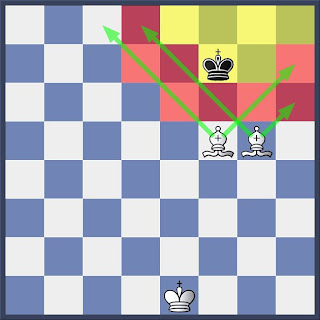 Example 3—After 3.Bf5
(Black to move is already confined to the six yellow squares)
If the Black King, in the original position, had been away from the last row, White should have advanced his King, and then, with the aid of his Bishops, restricted the Black King's movements to as few squares as possible. We might now continue 3...Kg7 4.Kf2 In this ending, the Black King must not only be driven to the edge of the board, but he must also be forced into a corner, and, before a mate can be given, the White King must be brought to the sixth rank, and at the same time, in one of the last two files; in this case, either h6, g7, f7, or f8, and as h6 and g6 are the nearest squares, it is to either of these squares that the King ought to go. 4...Kf7 5.Kg3 Kg7 6.Kh4 Kf7 7.Kh5 Kg7 8.Bg6 Kg8 9.Kh6 Kf8 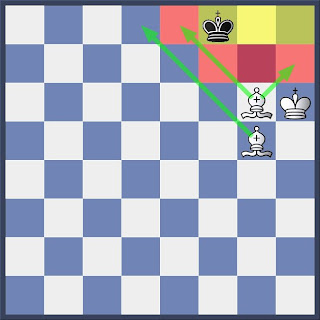 Example 3—After 9…Kf8
(Black is limited to three squares)
White must now mark time and move one of the Bishops, so as to force the Black King to go back. 10.Bh5 Kg8 11.Be7 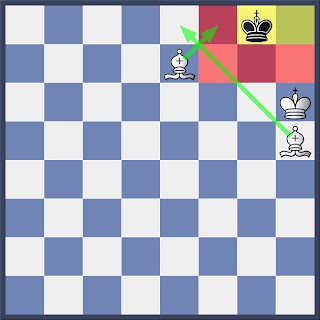 Example 3—After 11.Be7
(Black is now limited to two squares)

Now the White Bishop must take up a position from which it can give check next move along the White diagonal, when the Black King moves back to g8. 12.Bg4 Kg8 13.Be6+ Kh8 14.Bf6 mate.
It has taken fourteen moves to force the mate and, in any position, it should be done in under thirty.
In all endings of this kind, care must be taken not to drift into a stalemate.
In this particular ending one should remember that the King must not only be driven to the edge of the board, but also into a corner.  In all such endings, however, it is immaterial whether the King is forced onto the last rank, or to an outside file, e.g. h5 or a4, e1 or d8.