Story on The Chess Drum.  I am just stunned.  FM Morris Giles was a genius and a gentleman: I will miss him.

Much more to follow. For now, here's Giles's masterpiece (and arguably the most brilliant game ever played by a Chicagoan): he beats six-time U.S. Champion Walter Browne on Browne's home turf, the Najdorf Sicilian, with a positional piece sacrifice for an enduring light-square attack, then a queen sacrifice leading to a smothered bishop mate.

The most aggressive attack against the Najdorf Sicilian is 6 Bg5, which inhibits the original intention of this sharp, counterattacking defense - 6...e5? - which would yield White a hammerlock on the center after 7 Nf5. Nevertheless, the criterion of 6 Bg5 is whether it leads to more victories than the almost-as-ambitious 6 f4 or 6 Bc4 or the conservative 6 Be2 or 6 Be3 or 6 a4. The verdict is not yet in.

Developing with 8 . . . Nbd7?! has been considered so bad that the leading texts on the Najdorf refuse to analyze it. The unanimous opinion is that Black must prevent the potent 9 Bc4 by 8...Qc7 Yet Browne had played it at least twice before, against the grandmaster Nick DeFirmian in last year's [i.e., 1987's] United States invitational championship and also against the international master Patrick Wolff in Philadelphia last year. It is remarkable that on both occasions, his opponents chose the forgiving 9 O-O-O, allowing him to reach regular lines of play with 9 . . . Qc7.

Giles was not so generous, but played 9 Bc4 with the intention of breaking up the black formation.

It is more than likely that Browne had prepared and relied upon 10 . . . Bf6 11 O-O-O Qb6 to get him through the opening without incident. But he must have minimized Giles's sacrifice with 12 Ne6!? fe 13 Be6, opening the black king position and achieving a powerful grip on the light squares.

What is remarkable is that even after Browne had plugged the worst gaps in his position with 13...Nf8 and 14...Be6, Giles was still coming. 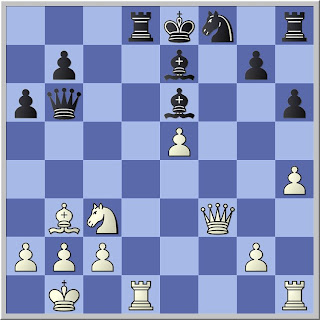 That is terrible news. Morris was an extremely strong player and a very nice man. He played in quite a few tournaments that I directed at the Chicago Chess Center in the late '70s and early '80s. He won most of them.

R.I.P. Master Morris Giles. It was an honor and privilege to know and play a true gentleman and Chicago champion with a winning style from the Fischer era.