Stolen from Tom Panelas on Facebook (and you are already a member of the Chicago Area Chess  Facebook group, no?)

Congratulations to Marco Codenotti of Pisa, Italy, who reports that he’s just earned his IM title. Marco is a former Chicagoan, Hyde Parker, and student at William H. Ray Elementary School. His father told me a few years ago that Ray was the place where Marco started getting serious about chess. He played for the school in the 2005 CPS elementary school championships at Lane Tech, at least one or two of Mike Cardinale’s YCFC tournaments, and possibly one of Zack Fishman's Navy Pier events, though I’m not sure about the latter. He also did Wayne Smith’s summer chess camp at Kennicott Park in Kenwood. Marco is 15 or 16, which means he’s certainly on track to make GM in due course. 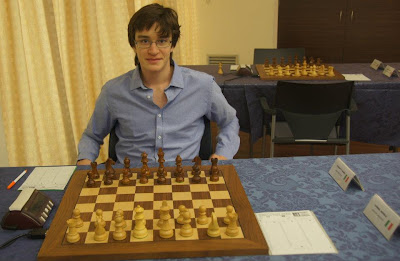 Tom had blogged about Marco as early as 2007.

Congratulations to Marco and his family!  (Well, we still have the Leaning Tower Y....)
Posted by Bill Brock at 4:41 PM