One final pitch for the Estate of Fred Reinfeld.  This is a fun training book! 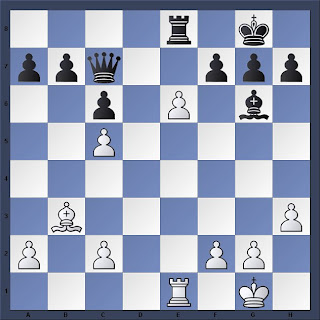 Posted by Bill Brock at 5:44 PM No comments:

I modified this one a little bit, as there were a zillion ways to win in Reinfeld's original position. 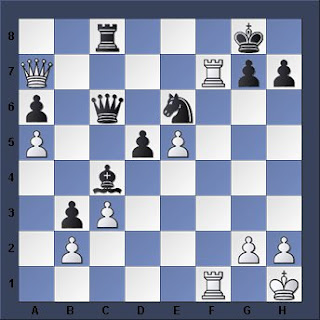 Posted by Bill Brock at 3:39 PM No comments: 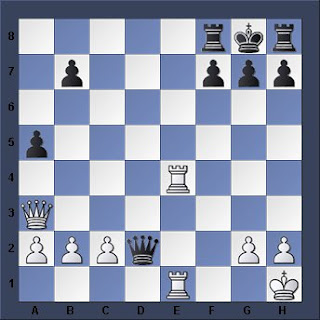 Posted by Bill Brock at 1:34 PM No comments: 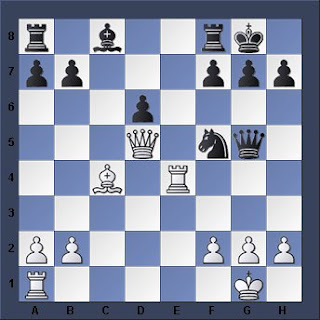 One of the Amazon reviewers suggested that 1001 Brilliant Ways to Checkmate should be read after How to Beat Your Dad at Chess. That seems like good advice to me, as the latter book is much more organized. But you should really read both!
Posted by Bill Brock at 7:35 PM 1 comment:

Details here!
Posted by Bill Brock at 1:52 PM No comments:

And you'll also see me at the Illinois Class, to be held on December 12th at another familiar spot, the Holilday Inn at 5300 W. Touhy in Skokie.  Details are here!
Posted by Bill Brock at 1:36 PM No comments:

I'm planning to play in this one, also at the DoubleTree in Oak Brook.  More info here!

Here's another exercise from 1001 Brilliant Ways to Checkmate, considerably more complicated that the last few we saw (but still not that hard): 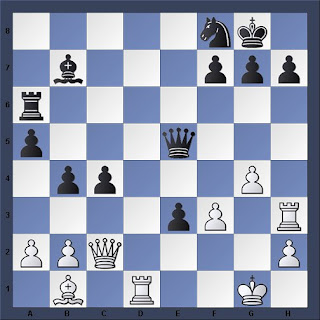 Can you combine pressure on h7 with the idea of mating on d8?  Don't forget that White has a bishop on b1!

Are we clear on the concept?  And buy this book. 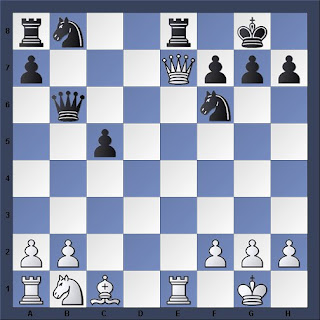 Back to the Back Rank II: Reshevsky-Fischer continued

Back to yesterday's question. 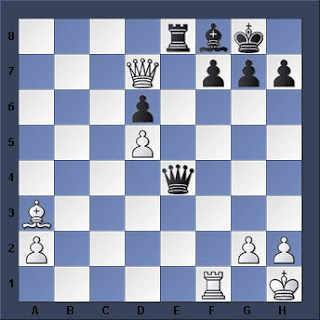 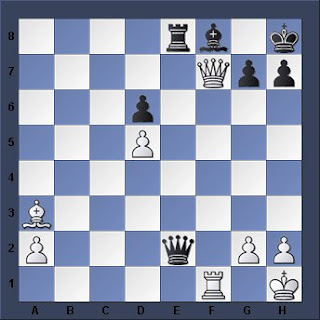 So what's the winning move? 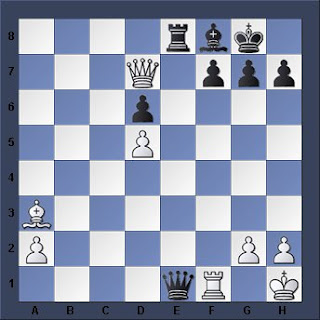 Of course, Fischer was not naïve in matters on the chessboard.  He found the best move: 28...Qf4! 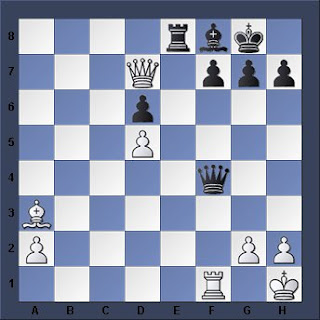 White to play in the actual game:
a critical position!


Switch sides for a minute and try to help Reshevsky save this position with White (hint: a grandmaster playing White would have real drawing chances against Fischer): what would you recommend?  The most important challenge is to avoid getting mated on the back rank!

Posted by Bill Brock at 6:00 PM No comments:

Here's a great national championship event for students in K through 12!  Each player has thirty minutes to complete his or her game.  The DoubleTree is the same quality site that has been used for the Chicago Open in past years.

See website for details.
Posted by Bill Brock at 5:02 PM No comments:

It could happen here... 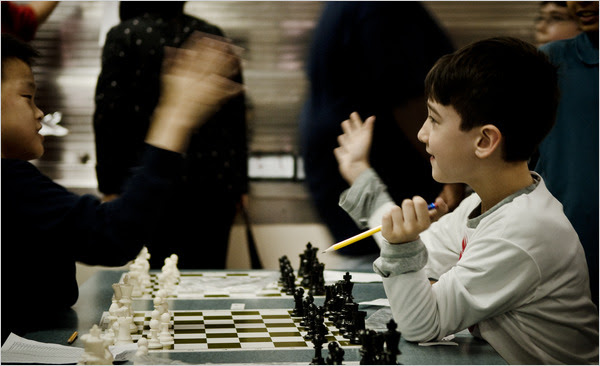 That was a steep cut for a woman who had been earning a six-figure income in investment banking[....]

Today Ms. Kaplan is president of Chess-in-the-Schools, which now teaches 20,000 new children a year, with an annual budget of $3 million. Since 1986, it calculates, it has taught chess to 425,000 children on the theory that the game helps them develop basic analytical skills that lead to academic success.

Email ThisBlogThis!Share to TwitterShare to FacebookShare to Pinterest
Labels: Chess-in-the-Schools

As in the previous example, the enemy king doesn't have to be castled for a back rank mate to occur. 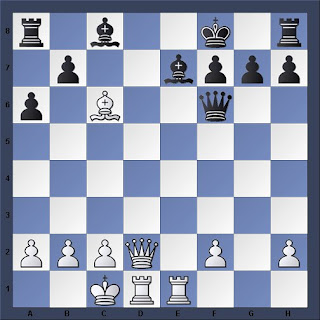 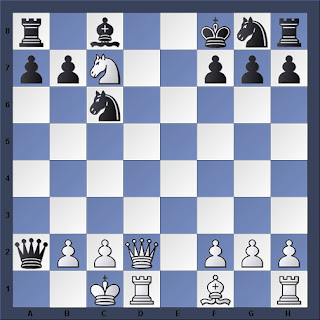 A chess curriculum for beginners

It's very nice!  (Adobe Acrobat document.)  From our friend Jerry Neugarten and the Highland Park Scholastic Chess Club.
Posted by Bill Brock at 12:49 AM No comments:

Back to the Back Rank: Reshevsky-Fischer, Palma 1970

This is a position hard enough that eight-time U.S. Champion Sammy Reshevsky blundered horribly, but easy enough that a beginner can understand.  But take it one step at a time, slowly, and double-check you calculations!

Bobby Fischer is Black, and it's his move.  The position is probably only slightly better for Black, but Fischer would really like to win this qualifier so he can eventually play Boris Spassky.  He needs your help!

How many different ways can Black threaten back-rank mate?  Fischer did choose one such move: which one would you recommend?  Do you see any problem with any of the other possible mate threats?

Thanks to the good folks at Bloomington Normal Area Scholastic Chess for another wonderful event!  There were 330 players in 10 sections: by grade from K through 8, and one combined high school section.

You'll find the full crosstables here.  Players, proud parents, coaches, TDs, and organizers are invited to send material to me (stories, photos, games, annotations) for publication on this blog, the Illinois Chess Association forum, and the forthcoming Illinois Chess Bulletin (going to press the Monday before Thanksgiving).
Posted by Bill Brock at 10:01 PM 1 comment:

Email ThisBlogThis!Share to TwitterShare to FacebookShare to Pinterest
Labels: All Grade

Ivanchuk at the Tal Memorial

Hilarious, and you don't need to speak a word of Russian.  The players as they appear on stage: Levon Aronian of Armenia, Peter Leko of Hungary, Ruslan Ponomariov of Ukraine, Magnus Carlsen of Norway (the laughing person seated in the preview above), Peter Svidler of Russia (joined by Aronian), Vishy Anand of India (seated), and our hero, Vassily Ivanchuk of Ukraine.

H/T to mishanp in the comments at the Daily Dirt.  OK, no more Carlsen photos for awhile.
Posted by Bill Brock at 9:22 PM 1 comment:

A subscription to New in Chess is frightfully expensive, and worth every penny.  I just received this issue last night (the cover story is Magnus Carlsen's victory at China's Pearl Spring supertournament; Carlsen and his trainer Kasparov are interviewed).

The previous issue had a great interview with U.S. champion Hikaru Nakamura.
Posted by Bill Brock at 10:01 AM No comments: 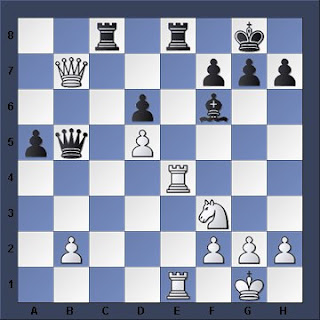 Here's the complete game.
Posted by Bill Brock at 12:24 PM No comments:

International Master Florin Felecan, the 2009 Illinois State Co-Champion, won the top section of Evanston Chess's November Bi-Level yesterday.  For more on this event, visit the Evanston Chess blog.
Posted by Bill Brock at 11:31 AM No comments:

When Adams and Torre played this game in 1920 (or, more likely, when Torre created the conclusion of this casual game from post-mortem analysis with Adams), Torre (born in 1904) was only about 16 years old! 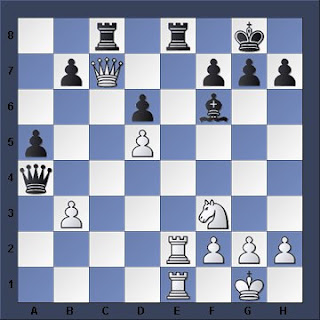 22.Qa5?! is a better idea, and it gives White real winning chances: 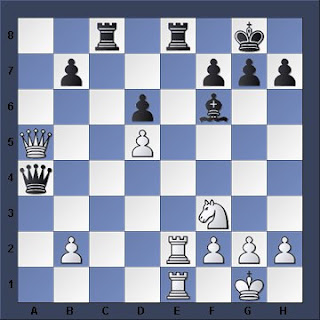 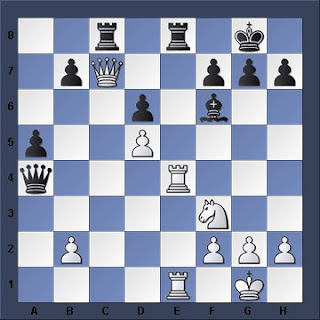 22...Qxe4 loses to a version of a trick we saw in the Bernstein-Capablanca game.  23.Rxe4! and Black can't take both unprotected pieces at once.  So Black must return the queen to b5: 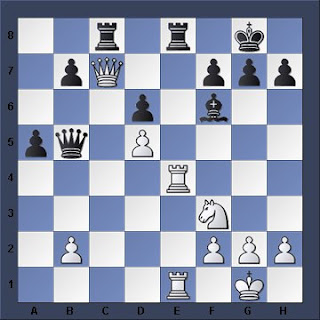 There are a couple moves that win, but there is only one winning idea!