IM Angelo Young won the Young Masters vs. Experienced Masters, a Scheveningen System event held at the North Shore Chess Center on Sept. 15-16, with an impressive 3 1/2-1/2 score. NM Sam Schamkel was the top scorer among the youngsters, scoring 2-2.

I'll be posting several games from this match after I work through the backlog of interesting games from the Illinois Open.

In the meantime, crosstable here (broken link fixed).
Posted by Bill Brock at 10:43 AM No comments:

First game won for the franchise

Chopper Trading lost its first match to Rogue Squadron in the Chicago Industrial Chess League 4½-1½, but Reza Gholidzadeh had the honor of the team's first individual win...against yours truly.

The Hobbit, or There and Back Again

David Franklin annotates a game from the first round of the CICL season. With the center locked, the White king wanders out of the shire and wanders back with a win in its pocketses.

Steinitz was famous for king walks under fire, but Petrosian lifted the idea of the prophlyactic king walk (evacuating His Majesty from the kingside prior to a kingside break) from Nimzowitsch.

...of the Isaac Braswell Fighting Chess Award from the 2012 Illinois Open.

A couple Reinfeldian truisms to consider:  A pawn on the seventh rank is powerful, but a rook on the eighth rank guarding a pawn on the seventh is meh. When all the pawns are on one side of the board, the knight's flexibility generally trumps the bishop's mobility.

Dmitry has been playing 3...a6!? off and on since the 1980s and is probably the world's foremost practitioner: whose idea was this, Gurgenidze's?

The "Greek Gift" bishop sacrifice against the castled king with Bxh7+ (or ...Bxh2+ as Black) is a very powerful attacking idea. As with so many such ideas, it is first known to have been played by Greco almost 400 years ago. But it doesn't always work! For example, in Charbonneau-Al-Ali, Olympiad 2008, the Canadian GM's sac was erroneous; he had failed to anticipate an unusual defensive idea (...Qa5+! followed by ...Qf5!). Vladimir Vukovic, in his classic The Art of Attack in Chess, devotes a whole chapter to exploring the sacrifice and when it does and doesn't work. Vukovic noted that after the typical 1.Bxh7+ Kxh7 2.Ng5+, Black can play ...Kg8, ...Kg6, and ...Kh6. "These three variations must be carefully examined on every occasion, for if any one of them contains a loophole, the whole combination falls to the ground." In the following game, my opponent surprised me with 11.Bxh7+, rather than the sane 11.cxd4 of Rozentalis-Arias, Olympiad 2008. The sac would have worked like a charm if I had robotically played 12...Kg8, e.g. 13.Qh5 Re8 14.Qxf7+ Kh8 15.Qh5+ Kg8 16.Qh7+ Kf8 17.Qh8+ Ke7 18.Qxg7#. However, 12...Kg6! left him without an effective follow-up and I won quickly.
Posted by Frederick Rhine at 2:07 AM No comments:

More from the Illinois Open

Jimi Akintonde is a very talented young player with a predilection for concrete, forcing play. Tam Nguyen may seem mild-mannered, but I've never known him to back down from a fight. And if the opening is the Sãmisch Variation of the King's Indian, the game will be entertaining.
Posted by Bill Brock at 11:39 AM No comments: 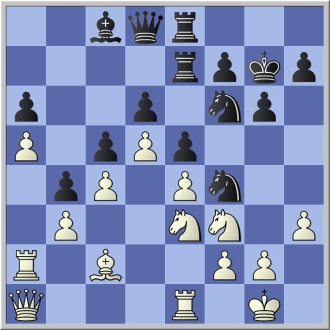 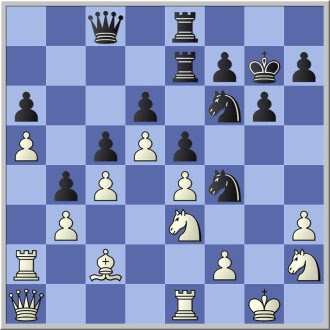 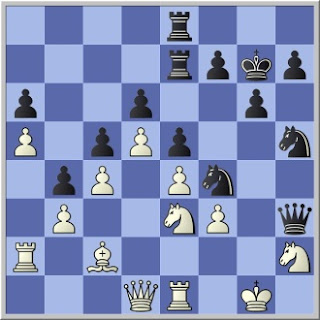 Posted by Bill Brock at 6:00 AM No comments:

The thrill of victory, the agony of defeat

We'll be posting games from the 2012 Illinois Open over the next few days, courtesy of FM Albert Chow.

Senior Master Carl Boor had an interesting summer.  Congratulations to Matthew Stevens: it's not every day that a Class B player knocks off a 2400.

NM Kevin Bachler and provisionally-rated Aamir Ansari tied for first in the Gold Section with 3-0; Jonathan Tan scored 3-0 in the Silver Section; and Matthew Ylinen, Keith Ammann, and Lorenzo Sampson scored 3-0 in the Bronze Section.

Crosstable here.
Posted by Bill Brock at 10:09 PM No comments: