Blaze game of the week

Take it away, Jeremy Kane!
Posted by Bill Brock at 10:47 AM No comments:

If the official site is overloaded, try The Week in Chess.   (There's a drop-down box above the live chessboard: the US-Israel games will probably be games 9 through 12 from the top.)
Posted by Bill Brock at 4:00 AM No comments:

Most of us think of Helen Warren as the emeritus heart and soul of the Illinois Chess Association.  Back in 1961, Helen Hendricks was one of the signers of our Articles of Incorporation (along with our respected friends Jim Brotsos and the late Frank Skoff, future U.S Women’s Champion Eva Aronson, and Peter Wolf).  Along the way (after marrying Jim Warren, an Expert who drew Fischer twice on his 1963 simul tour), she organized umpteen Midwest Masters, the 1989 U.S. Open, a couple of the best U.S. Masters ever, and other events too numerous to mention, she brought World Championship Candidates Viktor Korchnoi and Robert Hübner to Chicago for the 1982 Cloverline International, she founded the wonderful American Postal Chess Tournaments, served for decades in various USCF leadership positions, edited the Illinois Chess Bulletin, and, not least (my apologies for the unavoidable runon sentence), she was the voice of the ICA, even in those years when she didn’t officially have the title of President. 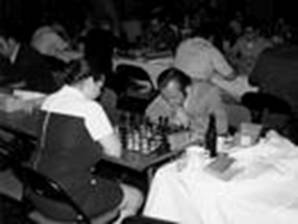 Life's simple pleasures: blitz chess and beer
Helen Warren vs. Ed Radavicius
1973 Chicago Industrial Chess League Banquet Blitz Championship
You may not realize that Helen also loves to play chess, and is pretty good at the game, as I discovered at the inaugural Master Challenge in 1979.  Even though the wallchart said my rating was about 450 points higher, I was the one on the run:
Bill Brock—Helen Warren
1. e4 c6 2. d4 d5 3. exd5 cxd5 4. Bd3 Nf6 5. c3
Almost a decade after the famous Fischer-Petrosian game in Belgrade, everyone in Illinois from senior master to patzer was still playing this line against the Caro-Kann.  Larry Chachere and Allen Kornfeld were among its partisans in the early 1980s, while Dr. Eugene Martinovsky never hesitated to defend the line.  Kornfeld beat the good Doctor in a 1981 Palmer House battle royal after 5...Nc6 6.Bf4 Bg4 7.Qb3 Qd7.  Then-current theory said that 7...Qc8 was a better choice, but fashions change.....
5...e6 6. Bf4 Bd6 7. Bxd6 Qxd6 8. Nf3 O-O 9. Nbd2 Nbd7 10. O-O Re8 11. Qa4 Nb6 12. Qb3 Bd7 13. Ne5?!
Threatening to tickle the Nb6 with 13. a4 would have been better. 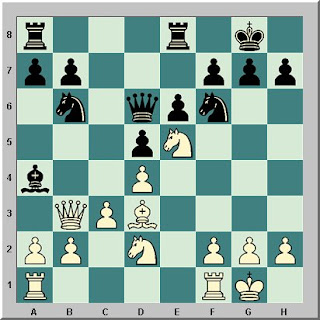 21...a6?!
Black would have retained a slight pull after 21...Nb8!
I played 22.Bxd7 with relief and ground out a slightly superior ending.  After Helen resigned, I started to explain her missed opportunity, but she cut me off quickly: “Good knight against bad bishop, I understand.”
***
Attentive readers may have figured out that I omitted one of Helen’s biggest accomplishments.  She saw that Illinois had many talented junor players who were stalling at a critical level in their development because they weren’t getting the same quality training as the kids from New York and California (let alone the Soviet Union).
So she did something about it by starting the ICA Warren Junior Chess Program.  Its mission is simple: to identify nationally ranked Illinois boys and girls, and to offer merit-based financial assistance to these students for individual and small group instruction with masters and grandmasters.  The goal of the program is to nurture the highest-potential Illinois students so they can be competitive on a national and international stage.
Currently, Illinois has several dozen boys and girls who are nationally ranked in their age group.  As talented as our teens are, I’m even more excited about our crop of young players.  Success in chess requires a combination of innate talent and hard work.  Intensive mentoring at a young age can propel our talented students to the very top levels of success.  The program works, as evidenced by the results of Warren Junior Chess Program alumni.  For the past four years, Andi Rosen has continued the work that Helen began, maintaining her tradition of excellence.
On November 7, 2010, the Illinois Chess Association will do its darndest to honor Helen Warren's five decades of service.  Please join us at Buca di Beppo, 90 Yorktown Road, in Lombard, from 1 p.m. to 4 p.m.


And you can purchase banquet tickets here!

Posted by Bill Brock at 9:56 PM No comments:

Big win for Kamsky over Cheparinov!  Nakamura drew Topalov with Black, which is something of an accomplishment in its own right. 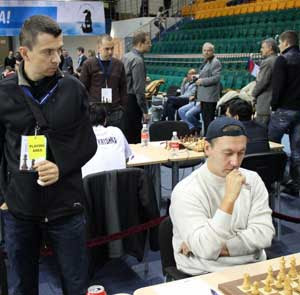 Onischuk watches Kamsky: Photo Tony Rich
Story at Chess Life Online, as usual!  If you're wondering what was going on at the end of the Kamsky-Cheparinov game, my working theory is that Gata was afraid of a blockade position in which rook plus three healthy pawns might well draw against queen and two isolated pawns.  So Kamksy sacked the queen back,  preferring the rook ending as cleaner.
Posted by Bill Brock at 2:57 PM No comments:

Local boy makes good in Siberia. Shulman lost to Grischuk in this line five years ago; that game was also in Khanty Mansiysk. The Marshall Gambit in the Semi-Slav (4.e4) is incredibly difficult...and very entertaining!

Posted by Bill Brock at 9:29 AM No comments:

So what's a doubled g-pawn worth?

To appreciate how close the Blaze came to running up the score, take a look at GM Dmitry Gurevich's near-miss on Board 1.


Endgame question: Black is a pawn up in the final position. Why was a draw agreed?
Posted by Bill Brock at 9:18 PM 3 comments:

It was very disconcerting listening to the Bears on streaming audio and watching the Blaze on the Internet Chess Club.  I felt that the Bears' squeaker could easily have been a ten-point loss, but I was never worried about Philadelphia beating Chicago on the chessboard.

IM Arjun Vishnuvardhan (still a teenager!) makes an impressive debut for the Blaze!

That's the title New in Chess bestowed upon Ukraine's #1 player, Vassily Ivanchuk. I have absolutely no idea what's going on in the following game: enjoy!


Coffeehouse tactics question: why didn't Ivanchuk take the "free" queen offered by Baadur Jobava (who's having an amazing tournament despite this loss) with 31...Qc1? What's wrong with 32.Nxc1??
Posted by Bill Brock at 8:45 PM 2 comments:

Coverage at Chess Life Online.
Posted by Bill Brock at 3:04 PM No comments:

Let's be honest: you probably have a friend or two, perhaps even a family member, rooting for the Packers tonight.

Tomorrow's breakfast match might generate similar divided loyalties, especially along the artery mentioned in an earlier post, Milwaukee Avenue.  It's USA vs. Poland.

USA 2½, Vietnam 1½: a peaceful and not at all imperialistic victory!  Read all about it on Chess Life Online.

Are Hikaru Nakamura's tweets vetted by his P.R. person?
Posted by Bill Brock at 5:06 PM No comments:

North Shore Chess Center founder Sevan Muradian is currently attending the FIDE Executive Board Meeting in Khanty-Mansiysk, Russia!  So we have three Chicagoans there: Muradian, Yury Shulman (representing USA in the Olympiad), and Mesgen Amanov (of Turkmenistan and Milwaukee Avenue).  Walter Brown (not the former US Champion Browne, but the national TD hailing from Illinois) is also in Khanty-Mansiysk.

Amanov led Turkmenistan to victory today with a brutal win in a topical line of the Queen's Indian.  His victim was the Lithuanian opening theoretician Eduardas Rozentalis:

Posted by Bill Brock at 4:59 PM No comments:

No, not that one. (Our office manager has tickets for tonight's White Sox-Red Sox tickets that she can't give away!)

The Philadelphia Inventors (hmm, "cheesesteakheads"?) and the Chicago Blaze face off tonight at 7:15 p.m.  Really, I have to have a sit-down with whoever dreamed up this schedule!


Or stop by the North Shore Chess Center at 5500 West Touhy Avenue, Suite A, in Skokie.
Posted by Bill Brock at 4:31 PM No comments:

"Chess as a Survival Skill"

Check out the article in today's Wall Street Journal, via Jerry Neugarten.


Wonderful things are being done by our friends in St. Louis:

Chess has been a part of after-school programs for at least 40 years, but mainly in the suburbs. In the last decade, it has exploded in popularity in urban areas as research showed that students who play chess do better on achievement exams, especially math.

But few schools offer chess as an academic subject—and fewer still require it, especially for students already labeled as troublemakers, like the ones here.

Innovative Concept Academy was opened last year by a St. Louis Juvenile Court Judge Jimmie Edwards. Tired of watching teenagers get kicked out of school, land in his courtroom and then drop out, Mr. Edwards created his own school to nurture students back to academic, emotional and mental health. The city's school district pays for the building and teachers, while money from not-for-profit groups provides the rest of the funding.

The Academy, housed in a three-story former middle school, caters to sixth through 12th graders who have either been suspended or expelled for fighting, bringing weapons to class, getting caught with drugs or other illegal or disruptive behavior.

The top floor of the three-story school is occupied by teenagers who have been criminally charged and gone through the juvenile court system.

Students attend class from 9 a.m. until 5:45 p.m. and have access to counselors, psychologists and mentors. [...]

The twice weekly chess classes are mandatory for most of the school's 97 students and are an integral part of Mr. Edwards's strategy to curb bad behavior and teach alternatives to violence. He knows that chess won't solve all the behavior problems, but says it offers lessons about self-control and critical thinking.

"Most of my kids are impulsive, reactionary and they lash out without thinking through the consequences," said Mr. Edwards, who walks the school's halls almost daily. "Chess teaches them patience and teaches them that there are consequences to bad decisions."

The chess program at the Academy is paid for by the Chess Club and Scholastic Center of St. Louis, which opened in 2008 and already has 700 members [....]

Posted by Bill Brock at 9:55 AM No comments: 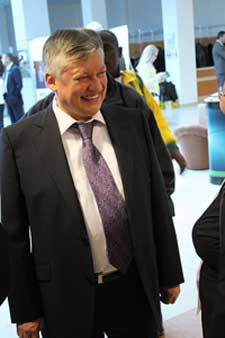 Anatoly Karpov
Tony Rich / CCSCSL for Chess Life Online
The refreshingly sensible John Donaldson provides a précis of the facts at Chess Life Online.
Posted by Bill Brock at 12:37 AM No comments:

One of the big stories of this Olympiad is the emergence of Vietnam as a world chess power.   And they're going to be around for awhile: their top two boards were born in 1991 and 1990, and their alternate was born in 1989.

Vietnam's Board 1, 19-year-old Le Quang Liem
(from ugra-chess.com)
USA bounced back from its Friday loss to Russia 1 with a nice win against Argentina in Round 5 (details on Chess Life Online) 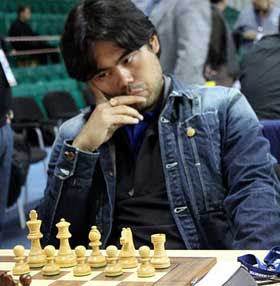 Hikaru Nakamura
photo: Tony Rich CCSCSL / Chess Life Online)
So both the USA and Vietnam are 4-1 in match points, and they're paired for Round 6.  Check out the pre-dawn action (games begin at 4 a.m., which means you can enjoy the middle games with your morning coffee).

Follow the games here!
Posted by Bill Brock at 8:31 PM No comments:

Kent Cen and Maximillian Zinski, both of whom are somewhat younger than I am, won the Gold Section of yesterday's Evanston Chess Club's 3x3.  The presence of NM Jon Burgess added a touch of class.  Evan Spiegel and Matthew Stevens won the Silver section, and Keith Amman and Dennis Doyle won the Bronze Section.
Ryan Chiu and Maret Thorpe directed for the Evanston Chess Club.  You can find crosstables here!
Posted by Bill Brock at 8:13 PM No comments:

More info at the CCA website and the ICA website
Posted by Bill Brock at 7:59 PM No comments: