Arguably, the Modern Benoni is the opening with the most ominous name.  Adarsh was the bringer of sorrow in an earlier round, but now....

Wonderful stuff at Chess in Translation.

The live game (Friday, it's Ponomariov-Kramnik: not a permalink) is here.

Yesterday's Kramnik-Le Quang Liem is here.
Posted by Bill Brock at 9:11 AM No comments:

The prizewinners of the 2009-2010 Chicago Industrial Chess League season are published here!
Posted by Bill Brock at 7:02 PM No comments:

Eric Rosen makes it back to .500.  As always, click on the moves to play through the game!

Tal played it, Fischer played it: the Modern Benoni can't be bad!

Tom Panelas reports: check out the Blaze's blog.
Posted by Bill Brock at 8:37 AM No comments:

Eric Rosen had a near miss yesterday against Parker Zhao: 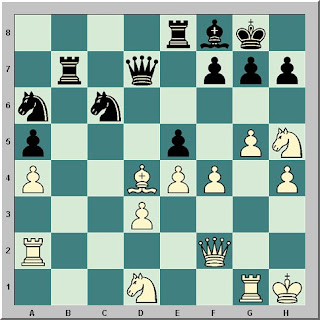 (Yes, White's first move is the "obvious" one, but I guarantee you that both players saw this move and were analyzing it.  Can you see what they missed?  Answer in the notes below.)

Posted by Bill Brock at 6:37 AM No comments:

A trap in the Slav and QGA

In the post below, Bill remarked that Jayakumar-Shetty was an uneventful draw. Indeed, but there was one moment of potential drama that Adarsh wisely avoided. Had he played 10.Rd1?? instead of his 10.Re1! he would have fallen into a trap that has claimed many victims, including former Women's World Champion Maia Chiburdanidze. In addition to the Slav Defense (as in Adarsh's and Chiburdanidze's games), it also often arises from the Queen's Gambit Accepted, e.g. 1.d4 d5 2.c4 dxc4 3.Nf3 Nf6 4.Qa4+ c6 5.Qxc4 Bf5 etc. After 10.Rd1?? Bc2!, Black must give up the exchange, since 11.Rd2?? Nb6 wins the queen.

Posted by Frederick Rhine at 11:58 PM No comments:

NM Adarsh Jayakumar (whose family is returning to Chicagoland in a couple weeks) is playing in the 2010 U.S. Cadet Championship in Crossville, Tennessee.  He's -1 after two rounds.

In Round 1, Adarsh got a nice position on the Black side of a Modern Benoni, but then got a little too creative.  The punishment was thematic.


Round 2 was an uneventful draw:

There are no easy opponents in these junior invitational events!
Posted by Bill Brock at 10:48 PM No comments:

George Leighton (more on Wikipedia) graduated from Howard University in 1940, was a Captain in the U.S. Army during World War II, graduated from Harvard Law in 1946, and had a incredibly impressive legal career culminating in his appointment to the U.S. District Court, Northern District of Illinois, in 1976.   He served on the Federal bench until 1987. (Oh, and he beat me in the 1991 National Open.)

In this 1982 game, Judge Leighton was 69 years old and paired against a recent Soviet émigré who had become Chicago's top-ranked player, Leonid Kaushansky.  (Leo would later share the 1994 U.S. Open title with Albert Chow and Dmitry Gurevich, among others.)  One might expect a blowout.  Indeed, the game was rather one-sided:


At his peak, Judge Leighton was a strong expert.  Still more on his chess career at The Chess Drum.

October 22 will be Judge Leighton's 98th birthday!
Posted by Bill Brock at 8:58 PM No comments:

The Kieninger Trap, seen below, is probably the most commonly played trap in the Budapest Gambit (1.d4 Nf6 2.c4 e5). It is named for Georg Kieninger, who first sprang it in 1925 in an offhand game against Godai in Vienna. (Shouldn't Kieninger have been playing the Vienna Game instead?) Some Budapest detractors say that this trap (which appears 14 times in ChessBase's Big database), is the only reason to play the Budapest. Not true! There's also 3.d5 Bc5 4.Bg5? Ne4! 5.Bxd8?? Bxf2# Arnold-Hanauer, U.S. Open 1936. In all seriousness, the Budapest is not that bad. IM Tim Taylor does a good job demonstrating its virtues in his 2009 book on the opening.

Posted by Frederick Rhine at 4:21 PM No comments:

An important trap in the Caro-Kann

The Caro-Kann (1.e4 c6) is an annoying opening to play against; White gets only a small edge, if that. The trap below is essential to know if you play either side of the Caro-Kann. It can win you a lot of points as White. Those who play the 2.d4 d5 3.Nc3 dxe4 4.Nxe4 Bf5 line will often blithely play 4...Bf5 against the Two Knights Variation (2.Nc3 d5 3.Nf3) as well, erroneously thinking that there is no significant difference between the two lines.

Posted by Frederick Rhine at 10:15 AM No comments:

Too much of a good thing?

Congratulations to Eric Rosen for a very solid win against a phenomenally strong opponent.

Recall that Eric's opponent, Conrad Holt, had a phenomenal result in the World Open, including a win against GM Evgeny Najer.  Perhaps Conrad is "chessed out"?

In a field this strong, however, it's inevitable that a couple strong players will have mediocre results.

Eric's loss yesterday was also interesting...hope to get to that later.

Posted by Bill Brock at 8:43 PM No comments:

Got this in the mail from the Continental Chess Association this a.m., just getting around to posting it.  (I occasionally do real work!)  You have a few hours left to save $$...

The Doubletree is believed to be sold out.  Nearby hotels are available- for details see the Chicago Class page of the CCA website.

Enter here!
Posted by Bill Brock at 8:30 PM No comments:

Here is an amusing trap - if that is not too grandiose a word - in the Sicilian. According to my sources, Slavoljub Marjanovic played White. However, since GM Marjanovic wasn't born until 1955, nine years after this game, he can't be blamed for it.

The Rubinstein Trap is a frequently seen trap in the Queen's Gambit Declined. It occurs in various different settings, and is characterized by White's Nxd5!, a pseudo-sacrifice of the knight that wins at least a pawn, since if Black plays ...cxd5, Bc7 will trap Black's queen. The trap is so named because the great Akiba Rubinstein, arguably the strongest player who never got a shot at the world championship, managed to fall into it twice - against Euwe at Bad Kissingen 1928 and against Alekhine at San Remo 1930. According to Edward Winter, the following game, predating Rubinstein's misadventures with the trap by over 20 years, is the earliest known example:

Posted by Frederick Rhine at 1:38 AM No comments:

J.R. Houghteling was a strong Chicago player around the turn of the 20th century. Here is his most famous game. White's play is feeble, but Houghteling concludes the game with a beautiful checkmate. Irving Chernev, in his classic The Thousand Best Short Games of Chess, noted that Bigelow called the final position "a rainbow of Bishops and Knights." Francis Wellmuth in The Golden Treasury of Chess wrote that it was "[o]ne of the most extraordinary mates ever given in actual play."

The wonderful chess writer and novelist Tim Krabbé once questioned the game's veracity (scroll down to No. 355), but later acknowledged, "A communication by Frederick Rhine makes it clear that speculations of [Dodge-Houghteling] being a hoax, are unjustified." In the same post, he gave several later examples of similar mates.

Posted by Frederick Rhine at 1:00 PM No comments: 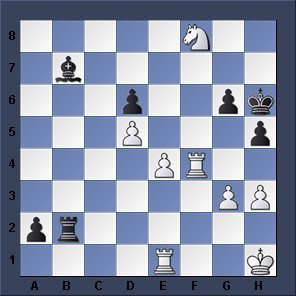 Rosen-Robson, US Junior Invoitational 2010
After 42...Rb2
White to play and win

In the first round of the 2010 U.S. Junior Invitational Championship, NM Eric Rosen of Illinois, the lowest-rated player, held the highest-rated player, GM Ray Robson - rated 404 points higher! - to a draw. Or maybe that should be "Robson held Rosen to a draw"? Robson blundered on move 37, losing a whole rook to a knight fork, and was fortunate that he was able to scrounge a draw with his passed a-pawn. In either case, way to go, Eric!

Board Two featured a full-point upset, as the second-highest-rated player, IM Sam Shankland, lost to NM Parker Zhao. Maybe announcing your retirement isn't the best way to psych yourself up for a big tournament.

In the U.S. Women's Championship, which also began Saturday, last year's champion, IM Anna Zatonskih, offered a draw to WGM Katerina Rohonyan when both were down to about a minute on the clock, but managed to win after Rohonyan declined the draw. Zatonskih said, "It was a game of blunders. I won in time pressure."

Another favorite, IM Irina Krush, won as Black against WIM (and former USCF President) Beatriz Marinello. The opening, a Queen's Indian, was almost symmetrical. An error by Marinello allowed Krush to win the bishop pair, whereupon she ground down Marinello in a two bishops versus bishop and knight ending. All five games in the first round of the Women's Championship finished decisively - as did the last 20 games in last year's championship! More information and games from the tournaments are available on the USCF website.