Kristi Kattapong sends us an email: the organizer is Downers Grove FRoG (Friends of the Gifted and Talented). 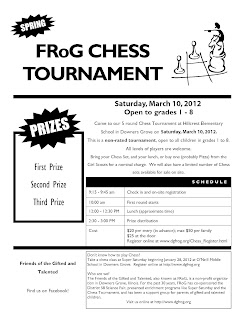 Details on ICA website.
Posted by Bill Brock at 2:55 PM No comments:

Question: is there a place where all the various programs at CPL branches are listed?
Posted by Bill Brock at 10:14 AM 1 comment:

Today and tomorrow in Bloomington at the U.S. Cellular Coliseum: details here.
Posted by Bill Brock at 8:13 AM No comments:

Not to be pedantic, but to IHSA, chess is an "activity."

Preview available on the 60 Minutes website.  If Carlsen is the "Mozart of Chess," then Kasparov is Beethoven?  (Yeah, I realize that "Mozart" is often shorthand for "prodigal talent," but Magnus is twenty, which is like being forty in most careers.)
Posted by Bill Brock at 2:19 PM No comments:

In the first round, Prospect's Robert Moskwa had the Black pieces against Benet Academy's 1968 rated Max Zinski.  By a somewhat circuitous route, the players wound up in a Sicilian Dragon with White playing the system with Bc4, h3 and 0-0.  Max played the opening well and put Robert in a very cramped position by landing a White pawn on f6.  However, Robert defended well and as often happens in the Sicilian, if White cannot find a way to convert his space advantage into an attack on Black's king, he often finds himself over extended and vulnerable.

This win turned out to make the difference in the competition for the the top medal on first board as Max didn't lose another game and finished 5.5-1.5.  As none of Eric Rosen or Matt Wilber's opponents finished with scores that good, Robert ended up getting the edge on tie break points.

In the last round, Robert played White against Stevenson's 2043 rated senior Kent Cen.  Again Robert found himself in a tough position out of the opening, and again he defended well.  The game wound up in a king and pawn ending where Kent played an instinctive move with less than ten seconds on his clock that turned out to be the losing move. 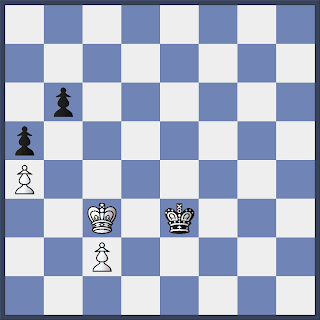 Details here! You still have just enough time to put a team together, or come and kibitz.

Preview on Chess Life Online. Again, the location is Crowne Plaza Hotel, 2875 N. Milwaukee Ave., Northbrook, IL 60062. But there's a very dangerous typo in the article: if you go to Milwaukee, Wisconsin, and not Milwaukee Avenue, you will be disappointed....

I'll be playing for Evanston on Friday and Sunday: see you there!
Posted by Bill Brock at 11:55 AM No comments:

If the Latvian Gambit is unsound, then why doesn't four-time U.S. Champion Alexander Shabalov refute it? OK, Shabalov may be an ethnic Russian, but he was born and raised in Latvia, and was a student of Tal.

The Grandmaster escapes with the full point.

Posted by Bill Brock at 6:03 AM No comments:

The Latvian Gambit, that is.  I had a pleasant Sunday afternoon analyzing with Andrew Karklins.
Here's one of the games we looked at:

Posted by Bill Brock at 9:42 PM No comments:

Read all about it.
Posted by Bill Brock at 9:26 PM No comments:

Who Was that Guy at State?

Most of the top high school players in Illinois have been playing organized chess for the better part of a decade or more. It is interesting to see that the cross table for the the Primary Section of the 2003 Illinois K-8 Tournament includes the names of almost all the top players from last weekend’s IHSA State Championship: Niles North’s Eric Rosen took first in 2003 followed by Stevenson’s Kent Cen and Josh Dubin at third and fourth, Whitney Young’s Sam Schmakel at fifth, and Hinsdale Central’s Aakash Meduri at seventh. Also participating in 2003 were Buffalo Grove’s Matt Wilber and University Urbana’s George Ruan as well as Denker Tournament invitees Adarsh Jayakumar and Jonathan Kogen. One name is conspicuously absent from that cross table however, 2012 IHSA 1st Place Medalist on first board and Denker invitee, Robert Moskwa of Prospect High School. In fact, despite his 1998 rating, you won’t find Robert’s name in any USCF cross table before December 2010, a mere fourteen months ago.

I first met Robert in October 2009 at the Prospect Chess Club. Coach Don Barrett had the students playing a consultation game with two teams in adjoining computer labs. I first stopped in the lab that held the first board’s team and I saw that their position was rather dicey. Then I went into the other lab where a newcomer was talking about the other side’s weak squares as well as other positional factors. I didn’t agree with all his assessments, but his reasoning was sound and he was clearly thinking about the game at a more sophisticated level than any player we had had before.

I went outside the lab to ask Don who this kid was. He told me that his name was Robert and that he had been playing freshman soccer up until that time. Don said that he was thinking about trying him on fifth board that week. I said “Put him on first.” Don demurred however since Robert had only played chess on the internet and had never used a clock or taken notation before. Robert crushed his opponent that week and again I said “Put him on first,” but Don decided to move him up to third where he crushed his opponent again. Our next opponent was MSL powerhouse Barrington with its 2000 rated first board Zach Kasiurak. Don wasn’t sure whether to put Robert on first or second, but the choice was taken out of his hands when our first board came down with the flu.

Since Prospect was the home team, Robert would be playing White against Zach. I remembered that Zach had played the Kan variation of the Sicilian against our first board two years earlier so I played it against Robert at the Tuesday practice before the match. Unfortunately, I didn’t know much about the Kan and I didn’t feel like I gave Robert any insights. On the Thursday of the match, Robert asked me to play a quick game before Barrington arrived. I thought about playing the Kan again, but I decided that playing the Najdorf, which I knew much better, might do Robert more good.  As we played, we  discussed some of the nuances of that variation as well as the Sicilian in general.

As it happened, Zach decided to play the Najdorf against Robert and he found himself in a bind pretty quickly. Unfortunately, when it came time to go for the breakthrough, Robert couldn’t quite pull the trigger and Zach gradually untangled his position. Zach managed to win a piece, but Robert took advantage of an inaccuracy to gain a couple of advanced pawns. Robert still had chances but Zach put on one of the most amazing displays of blitz I have ever seen playing the last twenty or so moves with only one second on his clock. Zach won, but he knew that he had been in a game. (You can see it here).  After the game he expressed regret that he hadn’t played the Kan and he rolled his eyes when I told him I had been playing the Najdorf against Robert.

Robert played first board for the rest of the season and continued to improve. He lost to Palatine’s Shiny Kaur during the regular season match but got his revenge at the conference tournament. He didn’t get a shot at Buffalo Grove’s Matt Wilber because Matt missed the match with Prospect. He had a second shot at Zach at conference but again came up short. At State, he went a respectable 4-3.

Robert continued at first board as a sophomore where he led Prospect to a best ever 7-2 finish and 1st place in the MSL Conference Tournament where he avenged a regular season loss to Matt Wilber. In February 2011, he went 4.5-2.5 at State with his only losses coming to Northside Prep’s Chengliang Luo and Glenbrook South’s Gauri Manoj. Prospect went 5-2 to finish 18th. Robert showed that he could stay in the game with anyone, but he wasn’t ready to beat the top players consistently.

Robert had entered his first USCF tournament in December of 2010 where he went 3-1 in an U1400 section for an initial provisional rating of 1518. By July of 2011, he hit 1884 after tying for first in B Class at the Chicago Class Championship and he followed that up with a tie for second in A Class at the Midwest Class Championship in October. The wins haven’t come quite as easily for Robert over the last three months as he played in the master/expert section of the Illinois Class, the U2100 section at the North American Open and the open section of Tim Just's Winter Open. Still, against sixteen opponents with an average rating of 2042, he managed eight wins against six losses with two draws.

So while Robert is relatively unknown among the high school players who have been competing against one another for years, I was not surprised when he went 7-0 at the IHSA State Tournament last weekend. His wins over Max Zinski and Kent Cen were enough to give him the edge on tie breaks for the 1st Place Medal on first board over Matt Wilber and Eric Rosen. Next up for Robert is the Denker Qualifier at the end of March where he will compete in a round robin against 2320 Adarsh Jayakumar, 2246 Sam Schmakel, 2151 Jonathan Kogen, 2060 Aakash Meduri, and 2010 Kent Cen. It is probably a bit much to expect him to come out on top of that group, but I have learned not to bet against him.
Posted by Vince Hart at 1:46 PM 4 comments: