Rounds 2 & 3 will determine the 2011 Chicago Industrial Chess League Champion: if you're playing in Evanston, stop by the North Shore Chess Center afterwards to find out who wins!
Posted by Bill Brock at 7:21 PM No comments:

A very close call for Kamsky, and a very interesting fight!

Shipov annotates.  (Not a permalink.)
Posted by Bill Brock at 7:15 PM No comments:

I'm glad to see that Kamsky has decided to do battle in current theoretical positions: the line after 20.Qa5 has been played several times before at the GM level. Didn't work today; might work on Saturday!


In the other Candidates Grischuk was surprised by a Kramnik novelty
Posted by Bill Brock at 2:21 PM No comments:

TWIC is back up

Grave of the greatest attacking genius (no, not Tal) ever?
Photo © Alex McFarlane.
More Candidates quarterfinals coverage at The Week in Chess.
Posted by Bill Brock at 2:16 PM No comments:

Email ThisBlogThis!Share to TwitterShare to FacebookShare to Pinterest
Labels: 2011 Candidates, Rashid Nezhmetdinov, The Week in Chess

Evanston CC Tri-Level this Saturday - only $5

1600 - 1699 may play up to Gold.
1100 - 1199 may play up to Silver.
Published USCF Regular Rating determins eligibility.
Unrated players may be placed up at TD discretion.
From time to time Evanston Chess pays one or more titled players to play in our events. We usually do not pair them against each other. Even if they should lose (it does happen) we may pair them with the highest score groups.
Four rounds. Digital clocks are required and will be set to G/40 plus 5 seconds delay. Accelerated or decelerated pairings at TD discretion. Sections may be combined at TD discretion.

Registration from 9:00 to 9:30 AM. Players must check in by 9:30 am; players who arrive late will receive a half-point bye for the first round. First Round 9:45 am, last round over roughly 5:00 pm. You may take one half-point bye in any round but the last.

Bring clocks. -- Wheelchair accessible. No Smoking.
Posted by Bill Brock at 6:00 AM No comments:

I had a blog entry sixteen months or so ago about the French film Joueuse.  It's being released here as Queen to Play.  Roger Ebert reviews.
Posted by Bill Brock at 8:35 PM 3 comments:

As you may have read on ChessBase, at one point in the Kramnik-Radjabov tiebreaks, there was a moment when Radjabov was literally seconds away from winning the Candidates quarterfinal match: all he had to do was draw a tricky (but objectively drawn) rook plus opposite-color bishop ending.  After move sixty, there was a clock malfunction, and the arbiters took thirteen minutes (!!) to restart the blitz game.  Kramnik managed to win and force yet another two-game blitz tiebreaker, which he also won, and with it, the match.

Interview here: congratulations to Teimour Radjabov for acting in such a sporting fashion after such a heartbreaking turn of events.

Incidentally, interest in the match was so high (and English-language real-time coverage so wanting) that The Week in Chess crashed: the TWIC live site is still offline.
Posted by Bill Brock at 7:43 PM No comments:

Semifinals pairings: Kamsky (USA) vs. Gelfand (Israel), and Kramnik (Russia) vs. Grischuk (Russia).  Play begins this Thursday.  The survivor will challenge Vishy Anand for the world title next year.
Posted by Bill Brock at 12:34 PM No comments:

From this morning's Sun-Times.  Don't take the headline too literally, as Kamsky and Nakamura might object.
Posted by Bill Brock at 7:49 AM No comments: 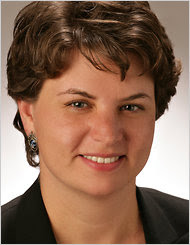 Victoria Livschitz, CEO of Grid Dynamics
Copyright The New York Times
An entrepreneuer explains how chess contributed to her success.
Posted by Bill Brock at 10:10 PM No comments:

In annotating the final game of the Kamsky-Topalov match for ChessBase, Alejandro Ramirez wisely writes, "In most cases in chess, the position is as natural as it seems."  In other words, most of the time, natural moves are sufficient to win a won game.  Only the strongest players have the fighting spirit to offer maximum resistance even when the game is objectively lost.

Acccording to the computers, Gata Kamsky was hopelessly lost.  But Kamsky drew convincingly, without an obvious blunder by Topalov. 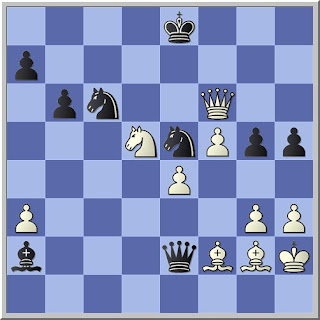 Veselin Topalov-Gata Kamsky
2011 Candidates Match, Kazan, Round 4
After 42...Ke8: White to play
What would you play as White?  How deeply would you calculate? 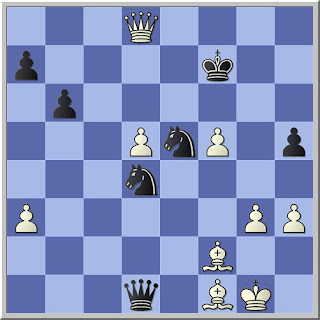 Veselin Topalov-Gata Kamsky
2011 Candidates Match, Kazan, Round 4
After 49.Qd8: Black to play
Black has several reasonable tries here (and perhaps more than one way not to lose), but only one move is clearly best.  Can you find it?
Congratulations to Gata Kamsky!  Later this week, he'll be facing Boris Gelfand, who has many friends in Chicago himself.

Posted by Bill Brock at 9:32 PM No comments: