Congratulations to two Illinois players, David Sye and Terrence Aguinaldo, who tied for first in Class D with 4½-½ scores. (Sye's prize was limited to $500 because he had recently had a rating more than thirty points over the class ceiling; Aguinaldo won a full $1,000.)  Another local player, Ga Luang Liu, shared third place with Hongbin Chen of Michigan and Sean Cramer of Ohio: each won $166.67.

David Sye shares nice analysis of what could have occurred in his pawn ending in the money round in his post on chess.com. 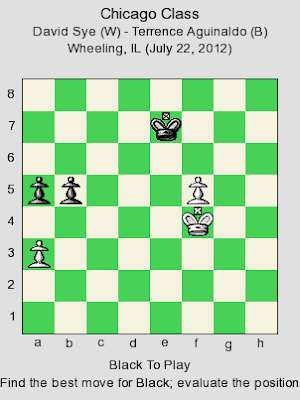 (David titles his post "A complicated endgame position from the Chicago Class," but really, the position is easy if you've taken the time to learn some basic tricks--and there are several cute finesses in this simple-looking position. There might even be lines that David correctly doesn't mention because they're not Black's best try, but are still worth looking at....)

Class D crosstable is here!
Posted by Bill Brock at 11:33 AM 2 comments:

Albert Chow reminds us that yesterday would have been the late Stanley Kubrick's 84th birthday. Here's the most famous chess scene from a Kubrick film:

And here's a nice recap of the game that was the basis of HAL's combination:

For a scene from the noir masterpiece The Killing, see this earlier post.

The scene in The Killing is based on the Chess and Checker Club of New York, also known as the "Flea House," frequented by Kubrick, Bobby Fischer, and many dubious characters. As an innocent teenager visiting Manhattan in the 1970s, I stumbled across the Flea House. On my way up the stairs, I passed a gentleman and two ladies leaving the Flea House attired in such a way that I assumed the "Chess and Checker Club" was a cover name for a house of ill repute. (It was a Saturday night: who knows, I might have been right.) So I turned around and went back down the stairs....
Posted by Bill Brock at 7:44 AM 1 comment:

Dutch grandmaster Loek Van Wely had to postpone his lecture, but the winner of the 2012 Chicago Class is a more than capable pinch-hitter. Mesgen is not just a great player, but a wonderful teacher! To spend six hours with a grandmaster for the bargain-basement price of $16.67 per hour is a wonderful deal. Details here!
Posted by Bill Brock at 6:58 AM No comments:

Self-analysis is cheaper than psychotherapy

I had narrowly escaped against NM Nolan Hendrickson at King's Island last year: one would think that I would have learned not to challenge him in an objectively dead-drawn ending.  (Right around the time I made the losing blunder, I told Albert Chow that the game would be over soon: I was right about the timing, but wrong about the result.)

Posted by Bill Brock at 6:49 AM No comments:

You know it's a tough event when you beat a GM and finish out of the money.  WGM Anna Sharevich knocked off GM Nikola Mitkov in round 4, but lost to GM Mesgen Amanov in round 2 and IM Qignam Liu in the final round: ridiculously difficult pairings.  And Gopal Menon defanged GM Mitkov's Grand Prix attack and drew IM Angelo Young in the first two rounds, but had less fun on Saturday night, as he got ground down by GM Dmitry Gurevich in a rather harmless-looking ending. You have just joined a very large club, Gopal.

Oh yes, prizewinners.  GM Amanov converted against IM Young in the last round and made his 4-1 first place on tiebreaks ($1,366.67) look routine.  FM Carl Boor continues to impress: he beat GM Gurevich's pet anti-Catalan system, grinding the grinder down in an ending (no mean feat). IM Qignam Liu also had a very steady event, highlighted by his last-round win against WGM Sharevich.  Both Boor and Qignam Liu won $1,266.67.

I had the pleasure of losing to Guijue Zhou in round 4: in the postmortem, she had the most kind and tactful way of suggesting to me the stupidity of my middlegame planning.  She, Matthew Marsh of Tennessee, and super-junior Kevin Cao of Missouri each won $466.67.
Posted by Bill Brock at 5:15 AM No comments:

Not the kind that kills brain cells, but the hangover one gets from playing five masters in one weekend. It certainly doesn't feel like I'm imagining mental exhaustion, but this article suggests otherwise.

"A brain without sugar is not a brain": this quotation is traditionally attributed to Alexander Alekhine, though I can't find the source.
Posted by Bill Brock at 1:49 PM No comments:

It's normal to feel exhausted on the morning after a weekend event.  I did not enjoy (deservedly) losing a superior bishop-vs.-knight ending in the last round, but I had fun!

The Nikola Mitkov-Gopal Menon time scramble in round one sounded like an metronome: I have never heard players move as quickly in tournament play as they did.

And it was pure joy to watch Carl Boor and William Aramil analyze a speculative queen sac in another player's Dragon Variation game: they got so engrossed in the possibilities that they were looking at a plethora of variations fifteen to twenty moves deep.

More later: for now, the crosstables are here!
Posted by Bill Brock at 12:28 PM 1 comment:

...to the newest National Master in Illinois, Jonathan Kogen!
Posted by Bill Brock at 12:02 PM No comments: 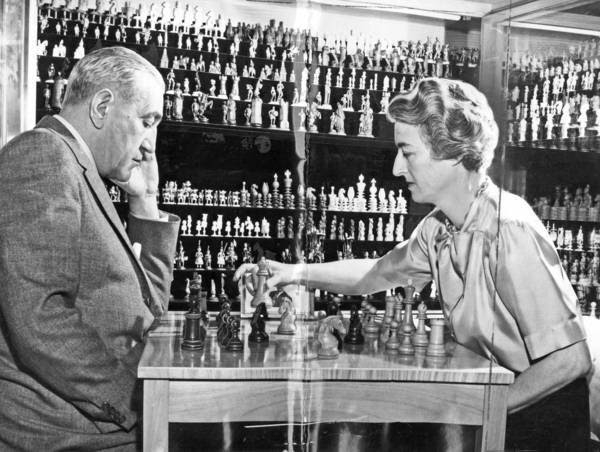