Remember tonight begins the 7th NA Amateur Open - a 5R-SS tournament which provides opportunities to achieve your FIDE (international) rating! Play is restricted to those rated above 1600 USCF unless special permission obtained prior.

7th North American Amateur Open - 5R-SS G/90 + 30/sec increment. North Shore Chess Center , 5500 West Touhy Ave Skokie, IL 60077. 847.423.8626.  Open to players with any established FIDE rating or an established USCF rating of 1600+. All participants compete in a single section.  EF: $40 for non-members of the chess center, $30 for members of the chess center received by 9/15. All $10 more onsite. Onsite registration - up to 15 minutes prior to round 1 or round 2. If registering prior to round 2, you will receive a half-point bye for round 1. Round times: Friday - 7:00pm, Saturday 12pm and 6pm, Sunday 11am and 5pm. Half-point byes available in any round. Prizes: 1st - $60 Best Buy Gift Card, 2nd - $30 Barnes & Noble Gift Card, 3rd - $15 Starbucks Gift Card. Parking: Free self-parking. Online registration preferred at http://www.nachess.org/events. Additional questions email to: sevan@nachess.org. USCF and FIDE rated. For online registration and list of more events please visit -http://www.nachess.org/events

Posted by Bill Brock at 3:26 PM No comments:

I don't know whether it's fair to call a blunder in a blitz game one of the biggest in chess history, but this game (played just a couple hours ago) led to Vassily Ivanchuk's elimination from the World Cup.

Alexander Grischuk and Peter Svidler, both of Russia, will play for the World Cup title. Ivanchuk and Ruslan Ponomariov, both of Ukraine, will play for third place and automatic qualification to the next World Championship cycle. Follow the action here, beginning well before dawn on Friday.

A heartbreaking loss for Ivanchuk!

Posted by Bill Brock at 8:55 AM No comments:

More on the Blaze win

NM Sam Schmakel in action (photo: Eric Rosen)
Brad Rosen provides an on-the-spot report of the Blaze victory. 3-0 is not a bad way to start the season, but Stalin and Alexander Kotov warned us against "dizziness due to success." Take 'em one at a time, give 110%....
Posted by Bill Brock at 2:14 PM No comments:

Between moves 20 and 25, Sam transforms an equalish middlegame into a battle between good knight and bad bishop. The price of winning a pawn on the queenside is submitting to an attack on the kingside. Sam consolidates, then finds a monster shot on move 40. Can you find the winning move for White in the diagram below?

I suppose this is an acceptable début for Sam in the U.S. Chess League.

Mesgen Amanov treats the Catalan as if it were a Botvinnik Semi-Slav. It's OK to be down a ton of material if you've got a phalanx of queenside pawns and a monster knight on d3.

The Chicago Blaze was stung more than once in last night's match with the Arizona Scorpions, but Mesgen Amanov and Sam Schmakel were able to crush their opponents' cephalothoraces to bring home the 2½-1½ win. Cool!

Rogelio Barcenilla is the first opponent to take a full point from the Blaze.  He finds a cool shot in response to Yury Shulman's 23...e5.  But with best play it should only be good for equality: Yury overpressed on move 24.

Posted by Bill Brock at 9:46 AM No comments:

Pardon our dust!
Posted by Bill Brock at 3:31 PM No comments:

Email ThisBlogThis!Share to TwitterShare to FacebookShare to Pinterest
Labels: grumble

Douglas Selph (first tournament!) and Aman Grover tied for first in the Bronze Section with 3-0.

Congratulations to the winners: crosstable here! 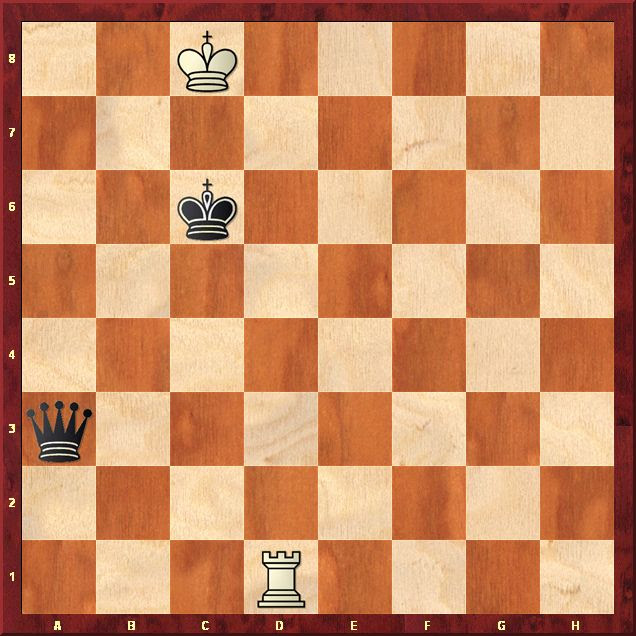 Moiseenko-Navara
World Cup 2011
White to move
A week ago today: David Navara had just reached an easily winning position in the difficult Q vs. R ending, and the 50-move rule was no longer a problem.  But Navara offered a draw...on purpose!

The World Cup's knockout format can  lead to some rather random results, which would have been particularly unfortunate given that this event is being used to qualify three players for the World Championship.  But the four quarterfinalists are all among the world's elite: Grischuk faces Ivanchuk, and Svidler faces Ponomariov.  The winners automatically qualify for the 2014 World Championship cycle; the losers play a match, the winner of which also qualifies.

Someone had to lose the match between fan favorites Gata Kamsky and Peter Svidler. Kamsky had the honor of losing to the most beautiful move of the World Cup:

Early risers are urged to check out Game 1 of the semifinals tomorrow morning at the excellent tournament website! If you hear Russian, don't panic: there is an English-language simulcast.
Posted by Bill Brock at 3:37 PM No comments:

If some guru knows why the blog's layout has gone awry, I'd appreciate some help.
Posted by Bill Brock at 3:23 PM No comments:

Kasparov-Anand at the World Trade Center

On September 11, 1995, the Kasparov-Anand World Championship match began.  The venue was the Observation Deck of the South Tower of the World Trade Center.  More photos from that day (and from another day six years later, one of the saddest of our lives) here. 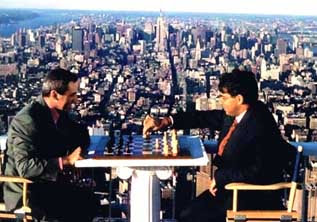 This day of remembrance is for the victims and the heroes of FDNY, NYPD, and Flight 93.  After today, let's also remember good things like the games from one of the greatest World Championship matches.