Hinsdale Central vs. Niles North for the title!

UPDATE: Niles North wins a sqeaker with Hinsdale Central for the IHSA title, 35½-32½.


Other round seven results on the top boards of this 125-team event (these are finals):


All results are here!


Brad Rosen sends a mobile message from the front lines:


Round 7 just kicked off with Niles North facing off against Hinsdale Central. To get there, Hinsdale Central beat Whitney Young in a wild scramble at the end.  Aakash [Meduri] held Sam [Schmakel] to a draw on board 1 and edged out the Dolphins 35-33. Meanwhile, Niles North eked one out against Stevenson: David Paykin won a dead lost position on board 3 against Matthew Wang with drama and panache . And I do mean drama. A short respite and then they were back at it again... a bit of a fight club, warriors, cage match feel down here at the big dance.

After five rounds, four perfect scores remain: Niles North, Whitney Young, Stevenson, and Hinsdale Central.  Looks like one team may go 7-0, after all!

Round 6 (which should be wrapping up soon) features Hinsdale Central - Whitney Young and Stevenson - Niles North on the top two boards.
Posted by Bill Brock at 1:46 PM 1 comment:

March of the Grandmasters

GM Kaidanov is at the North Shore Chess Center tomorrow!

My friend Noureddine Ziane (founder of USA Chess, Inc.)  took online lessons with Kaidanov some years ago.  He said that Kaidanov is a wonderful teacher, and passed along this bit of advice:

I did this once, and I was amazed to find that in three of my last ten losses, I had automatically rejected a move that allowed a double check.  Maybe your results won't be quite that specific.   Anyway, tomorrow's session is highly recommended! 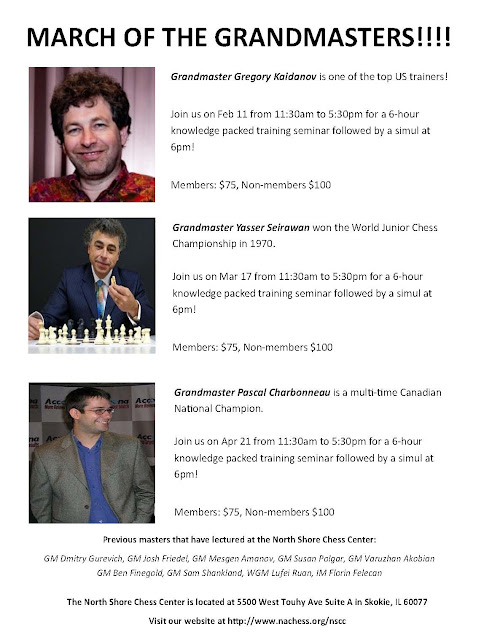 That's the well-sourced rumor. Teimour Radjabov of Azerbaijan would be the wild card.
Posted by Bill Brock at 7:52 AM No comments:

A final installment of games from TJWO

....as well as the crucial game from December's Illinois Class, in which Dr. Tansel Turgut beats eight-year-old Awonder Liang (whose name makes him a Wünderkind in more than one sense).

Dr. Turgut annotates his game (only the introduction was written by me).  I annotate my game with Patrice Connelly, in which two reasonably competent players each cram their share of mistakes into a short game: the Marshall Attack demands precise play.  All other annotations are by FM Albert Chow, who's covering the games of the 2012 Illinois Tour.


Games are here!
Posted by Bill Brock at 5:48 AM No comments:

Adventures in the Botvinnik Variation

Losing a won position in the first round of a Swiss System event is never fun.  But Akshay Indusekhar found an extremely cool tactical shot.  Such is chess.

I came up with a "better" move in the post mortem, but that move throws away the win, too.

Here's the critical position: can you do better than me? 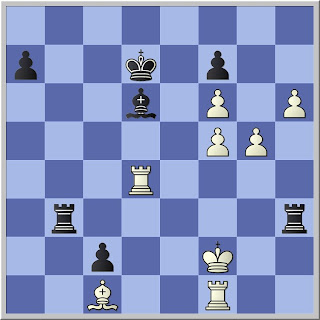 Also, the position after move 18 is a theoretical tabiya: some of the famous games I'd forgotten are included in the notes below.

Here are the round 1 pairings (oops, I'd omitted the link this a.m.): two Chicago selective enrollment schools, Whitney Young and Northside Prep, are the top seeds.  FM Eric Rosen is playing in his last state event for third seed Niles North.  Realistically, I think any of the top eight teams have a chance to win (FM Gauri [Shankar] Manoj and Gavin McClanahan both play for #8 seed Glenbrook South!), and it's going to be very hard for any team to go through this event with a clean score.
Posted by Bill Brock at 10:11 AM 1 comment:

2012 Illinois Tour commentary is provided by FM Albert Chow.
Posted by Bill Brock at 9:34 AM No comments:

Andrew had a triple bypass on December 5th.  I spoke to him today, and he sounds pretty darn good!
Posted by Bill Brock at 2:00 PM No comments:

From Friday's Financial Times.  (Thanks to Michael Aigner.)
Posted by Bill Brock at 9:22 AM No comments: