Most absurd Internet game yet

Posted by Frederick Rhine at 1:01 AM No comments:

Don't miss Chess: The Song! Amusing, though I don't think it'll be a mainstream hit like One Night in Bangkok.
Posted by Frederick Rhine at 4:15 PM No comments:

Email ThisBlogThis!Share to TwitterShare to FacebookShare to Pinterest
Labels: music

Another cut-and-paste from my email: make your plans for Memorial Day weekend!  Please remember that Illinois Chess Association membership is required for all rated Illinois residents.  You get a discount when you renew your ICA membership at the same time you register for the Chicago Open!

RATING DROP PRIZE LIMIT: Players who have had official ratings more than 30 points above section maximum any month May 2010 through April 2011 may not win over $1500.

Enter here!
Posted by Bill Brock at 11:47 AM No comments:

Illinois Chess Association Treasurer Carl Dolson is the managing trustee of the ICA's Broughton Fund, which periodically awards the Natalie Broughton Life Achievement Award.  Carl's been asked to write a short biography of Natalie for the ICA website, and was stumped.  He writes:


The only thing I can find on the internet is from a Time Magazine article from 1972 on “Why They Play: The Psychology of Chess” in which Natalie Brougton, “a Chicago suburban housewife” is quoted as saying “My favorite gambit against male opponents is Sitzfleish. If you sit long enough, staring and pondering, you don’t have to have a fast mind. The other person will become so annoyed and tired that he finally slips.” I thought you, or other Chicagoans you know, would be able to fill in some of the blanks on Ms. Broughton.

I also found a notice of death from the June 7, 2002 Chicago Tribune for Natalie W. Broughton of Evanston, age 85, beloved wife of the late Donald B. Broughton, burial at Memorial Park Cemetery, Skokie. No obituary. Black to play
What's the best move?
Follow this link to enjoy this cool game!
Posted by Bill Brock at 4:25 PM No comments:

See the ICA Tournament Calendar for more info!
Posted by Bill Brock at 12:12 PM No comments:

Here's the answer to the quiz that I flunked in over-the-board play: 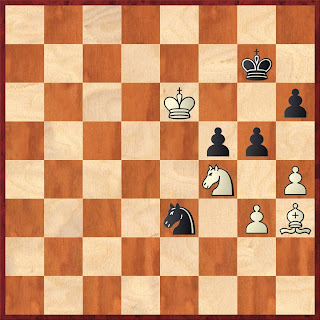 Hayhurst-Brock
Chicago Industrial Chess League, 2011
After 71...g5: White to play and win
It would have been time for me to throw in the towel after the simple but difficult 71.hxg5! hxg5 72.Nd5!   It would have been a well-deserved victory for the Bh3, which had been engaged in a domination struggle with the Ne3 for a couple dozen moves.
Both players knew that White could not afford to trade away all his pawns, so we both overlooked that in certain situations, White might want to initiate the trade.  (Hayhurst was in severe time pressure, but I had a good twenty minutes.)
Posted by Bill Brock at 7:34 AM 1 comment:

"Taking It Up a Level"

Do you have the proper mindset when you sit down to play a higher-rated player?

Check out NM Jon Burgess's article on the ICA website, based on his recent lecture to the Evanston Chess Club.
Posted by Bill Brock at 11:30 PM No comments:

Today I had the pleasure of co-annotating Sam Schmakel's fascinating game with IM Florin Felecan.  Look for the article shortly on the ICA website!

Details here!
Posted by Bill Brock at 10:57 PM No comments: