I heard a report Thursday that was confirmed yesterday. Prize checks from last weekend's Illinois Class Championships issued by Mikhail Korenman's IntECS, Inc., were returned unpaid, marked "Account Closed." Mikhail Korenman is currently out of the country and will return on December 22nd.

There may be a reasonable explanation for this.  Or not. Whatever the cause, the Illinois Chess Association is profoundly embarrassed that this happened in one of its championship events, and yesterday, ICA board members voted unanimously to pay the prizewinners in full and to reimburse them for any returned item or other bank fees that they may have incurred.

Sevan Muradian has recreated the prizewinners' list for me, and ICA Treasurer Carl Dolson will have checks in the mail as soon as he has contact info for the prizewinners.

EDIT: I have email addresses for fourteen prizewinners: please drop me a line with your mailing address.

Again, our apologies!
Posted by Bill Brock at 4:12 PM 4 comments:

Games from the 2011 Illinois Class (part one)

Annotations on the ICA website!
Posted by Bill Brock at 1:24 PM No comments:

Illinois Class Championships: Under 1000 and Under 700

These two sections were listed as Game/75, but try to get kids to think about anything for seventy-five minutes.  Pairings were made as soon as the previous round was completed, and the five-round event was done before the other sections began round two!

Kyle Kras took clear first in the Under 1000 section with a 3½-1½ score; Giorgi Vanderway, James Calcagno, and Ankush Moolky tied for second with 3-2.

Daniel Polski swept the Under 700 section with a perfect 5-0!  Alexander Smirnov lost only to Polski and took clear second with 4-1.
Posted by Bill Brock at 12:48 PM No comments:

Congratulations to Jonathan Hrach for winning clear first in Class C with 3½ points and picking up 90 ELO points in the process.  Cristian Peña took clear second with 3-1. In Class D, Anthony Gasunas drew his first game, then reeled off three in a row for 3½ points and the title. His Round 1 opponent, Richard Lewis, took clear second with 3-1 and gained 80 ELO. Class E was a bit of a bloodbath, as there were no undefeated players. Shereya Mangalam lost Round 1, then won three straight to execute a perfect Swiss Gambit: Shereya's 3-1 took the undisputed title. George Ries, Robert Kunke, Douglas Campbell, and Brian Suganraj finished in a four-way tie for second at 2½-1½.
Posted by Bill Brock at 12:28 PM No comments:

Consider the following two positions which were inspired by Robert Moskwa's game at the Illinois Class with World Under 8 Champion Awonder Liang. White has just checked the Black king with his rook and Black has the choice of moving away from the White king and pawn with 1...Kd7 or towards them with 1...Kb6. The only difference is that the White rook is on c4 in the first and c3 in the second.  Both positions are theoretical draws if Black makes the correct choice. See if you can figure out what the right move is in each case before you look at the analysis on my blog. 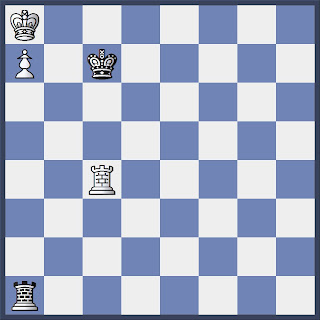 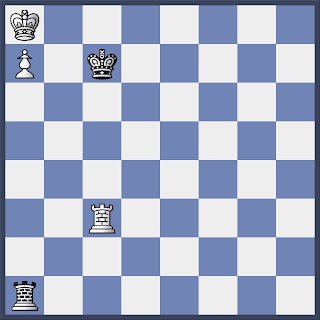 Illinois Class Championships: Classes A and B

Classes A and B were combined.  15-year-old Nathaniel Kranjc of Wheaton (a 2011 ICA Warren Scholar) won the tournament (and Class A) with a 4-0 score.  Eight-year old David Peng of Northbrook (another 2011 ICA Warren Scholar, and one of several veterans of the just-completed World Youth Championships in Brazil) took clear second with a 3-1 score.

The winners of Class B were one of Chicago's finest, Dmitri Kosteris (adults can play chess, too!), Brian Harrigan of Indiana, and Rachel Ulrich of Wisconsin, a home-schooled sixth-grader.  (Rachel and I compared our age-ten-ratings last year: divide her rating by two, and you'll get my original rating.)

Look for games on the ICA website in the next few days!
Posted by Bill Brock at 1:31 PM No comments:

The tournament is over (Nakamura beat Adams, all other games drawn.)  Final scores (unofficial):

Update: Nakamura won with the King's Gambit!  The game is here.  The final round report should appear here soon.
Posted by Bill Brock at 11:24 AM No comments:

ICCF Grandmaster Tansel Turgut knows something about over-the-board play, too, as evidenced by his victory in this past weekend's 2011 Illinois Class Championships with a 3½-½ score.

Dr. Turgut had a narrow escape in the final round against 8-year-old (!!!) Awonder Liang.  It appeared to this kibitzer that Awonder (in clear first at the beginning of the round) had his esteemed opponent on the ropes at one point.  But he lost, and tied for second with FM Albert Chow with 3-1 scores (Chow was undefeated and beat NM Greg Bungo in the last round.  Don't ask me what I was thinking when I wrote the last sentence: Chow and Bungo played a very correct draw, and I even played a small role in the post-mortem.)

In the skittles room, Awonder was disconsolate about his loss in an eight-year-old kinda way.  But his father and siblings reminded him that he played very well, that he should be proud, and it's that only a game. (Useful advice for adults, too.)  Dr. Turgut came to collect Awonder's signature on the scoresheet "so I can show other people someday that I beat a world champion."  Adream Liang chimed in, "But he's already world champion!"  Thus cheered up, Awonder started kibitzing my post-mortem: 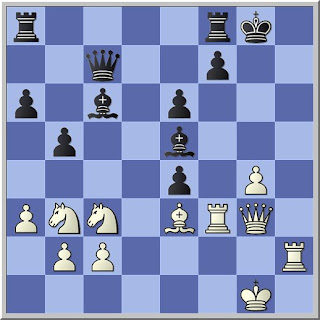 Brock-Moskwa (variation)
White to play and win with style
(yes, 1.Bf4 and 1.Rf4 are good enough, but look for the coolest move)

I don't think it took Awonder more than two seconds to spot the shot.  (Hint: leave your queen and rook en prise, and allow Black to capture a third piece with check.)  What a phenomenal talent!

Thanks to the Orland Park Cultural Center, organizer Mikhail Korenman, and TD Sevan Muradian for a smooth and fun event.

A report on the other sections will follow: look for games on the ICA website in the next few days!

Edit: here are the crosstables!
Posted by Bill Brock at 8:44 AM 6 comments: