After three rounds of All Girls National Championships

IM Florin Felecan and FM Albert Chow drew on Board 1 in the final round to tie for second with 3½-½.

Crosstable here!
Posted by Bill Brock at 9:28 PM No comments: 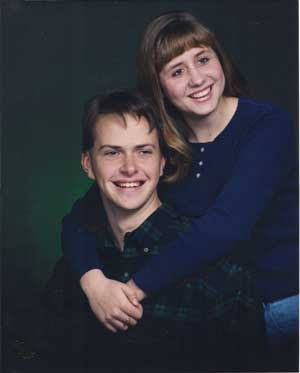 Josh Manion & Julie Oberweis
...not that many years ago!
Courtesy of Chess Life, Andi Rosen's interview with Josh Manion is now available on the ICA website.
As long as we've got the family photo album open, here's Julie on the cover of the July-August 1991 ICB.

Posted by Bill Brock at 9:53 PM No comments:

One of the co-editors of this blog gets well-deserved kudos at Dana Blogs Chess for his contributions to WikiProject: Chess.

Frederick and I rewrote large sections of Wikipedia's Bobby Fischer article a couple of years ago.  This reminds me that I need to write a review of Frank Brady's Endgame

after tax season, as the article's weakness mirrors one of the biggest flaws in Brady's book (otherwise strongly recommended!): the coverage of Fischer's miracle years 1970-71 is embarrassingly thin.
Posted by Bill Brock at 9:02 PM No comments:

223 preregistered for All Girls National Championship!

Here's the current registration list for this USCF National Event, here in Chicago this weekend!

There's still time to enter: fortunately for the out-of-towners, the All Girls is at the Doubletree Mag Mile (and not some godforsaken suburban location, far away from tourist attractions and public transportation).
Posted by Bill Brock at 8:49 PM No comments:

Here's one of the two decisive games from the last round of the Illinois Denker Qualifier (which, just to refresh your collective memory, is the Illinois Chess Association's High School Invitational Championship). 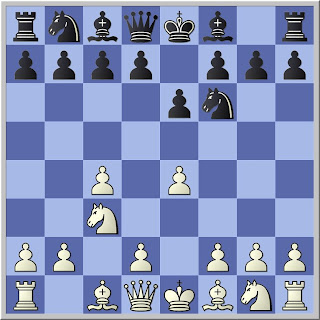 Rosen-Magness, Skokie 2011
Black to play
3...c5 was Karpov's choice against Korchnoi in the 1978 world championship.  The idea of swapping the c-pawn for White's d-pawn is positionally sound, and Black scores well with this variation.  But I always felt a little uncomfortable after 4.e5 Ng8.  The artificial isolation of the e5 pawn offsets White's space and time advantages, but doesn't make the opening fun to play!  And Karpov lost that game. 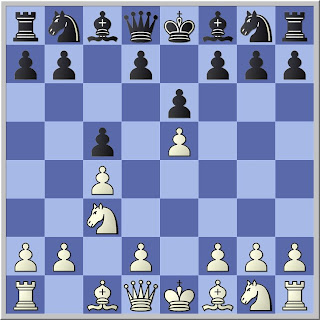 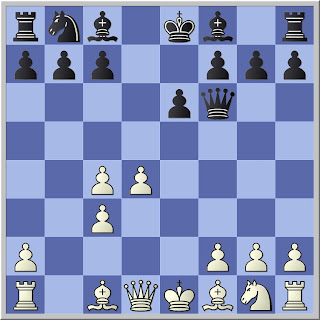 After 7.d4: Black to play
Seems pleasant for White!
Trevor's radical choice was new to me, but it's been played recently by the Filipino prodigy Wesley So: 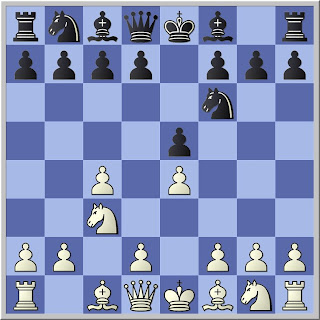 After 3...e5!?
Beginner's move or brilliant idea?
One idea behind Black's deliberate waste of time is that White's combination of e2-e4 and c2-c4 is double-edged, as dark squares are weakened.  Another way of looking at this position: it's as if this were a Vienna Game (1.e4 e5 2.Nc3 Nf6) in which White gets the move c2-c4 "for free," but the value of the extra tempo is unclear.  Anyway, 4.Nf3 Nc6 5.d4 cxc4 6.Nxd4 seems like a critical continuation.  White would love to trick Black into an advantageous version of the Scotch Four Knights (recall that there's a line in which White plays Nc3-a4 to gain space with c2-c4), but Black doesn't have to allow such nonsense.
In the game above, Eric played more quietly against Trevor, and didn't get anything from the opening.  If I can learn a new move on move three of an opening that I defended against for twenty years, then I've got to believe that chess is still full of surprises!

After busy season, I'll have more to say about this game on the ICA website.  Perhaps in the interim, folks can explain this opening to me :-)
Posted by Bill Brock at 5:32 PM 7 comments: