I happened upon the game below on chessgames.com, to which I had submitted it some time ago. It was played in 1978, at a tournament I directed at Jules Stein's Chicago Chess Center, then at 2666 N. Halsted in Chicago. It was, and remains, the biggest upset I have ever seen or even heard of - over 1,000 rating points! White was Mario Spinosa, a junior with a published rating of 1272. Black was Ove Kroll of Denmark, a strong master who was a graduate student in mathematics at the University of Chicago, rated 2315. Ove was one of the strongest players in Chicago, and became a Senior Master a few months later.

The USCF had a big problem with its ratings program at the time, and ratings were lagging several months behind reality. Mario was improving rapidly, and his actual rating was more like 1600. He was particularly strong tactically, as this game well illustrates. He became a master about five years later.

After Mario played 9.Bf4 (à la Bildhauer, though he had just stumbled into this line and unlike Kroll knew nothing of the theory), Kroll thought a long time and finally rejected 9...Nxd4, perhaps because of 10.Be5 Nc6 11.Bc7+, a line not given by Myers, nor by T. Kapitaniak in Nimzovich Defence (1982), p. 33, but which the engines say is winning for White. Instead, he tried 9...e5!?, trying to gain time to develop his pieces and trap the knight. Myers says that move "is playable," while Kapitaniak simply gives "9...e5!-+" without further elaboration. But as the further course of the game showed, things are much more complicated than that. Kroll's pieces became extremely active, and he could have given perpetual check with 22...Ne2+. But who settles for a draw against a player rated 1,000 points lower? Instead he played 22...Nxh1?!, ironically trapping his own knight in the corner. Mario finally extricated his knight with 26.Nc7 and 27.Ne6!, and wound up the game with a pretty mate of Kroll's king, marooned on a1. It's odd how important the a8, h1, and a1 corners were in this game. 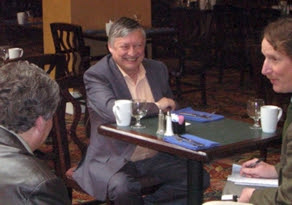 Great interview by Jim on the ICA website!
Posted by Bill Brock at 6:00 AM No comments: 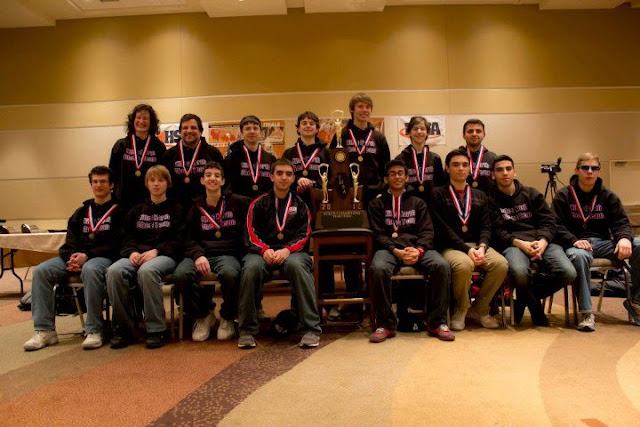 Niles North High School won the  Illinois High School State Chess Championship this past February. This was their second state championship  in three years. Next week, the High School and the Village of Skokie will be honoring the coaches and team.


On Monday May 7, 2012, Niles North High School will celebrate the chess team's accomplishments and unveil a prominent banner facing the  Edens expressway. Later on May 7th ( 8:00 p.m), at the Skokie Village Board Meeting, the Mayor George Van Dusen will be reading a proclamation honoring the coaching staff and team.


Chicago Chess Blog has scooped its competition by obtaining an exclusive advance copy of this proclamation:


WHEREAS, the Niles North High School Chess Team won all seven of its matches and captured the Illinois High School Association (IHSA) 2012 State Chess Championship crown at the state tournament held February 10th and 11th, 2012 in Peoria, Illinois; and


WHEREAS, Junior, David Paykin, demonstrated exemplary skill, tenacity, and fighting spirit by winning his crucial sixth round match in a momentous come from behind victory which kept the Team's title hopes alive, and ultimately lead to the Team securing the championship title; and

WHEREAS, Senior, Eric Rosen, finished in second place, individually, at the National K-12 Championship and forther, along with his partner, Matthew Dahl of Edina, Minnesota, captured the National Bughouse Championship in a sanctioned side event competition; and

WHEREAS, Coach Kyriazes, and fellow coaches Heather Ingraham, and Mases Hagopian, are recognized for their unique and innovative approaches in providing a nurturing training environment where the qualities of teamwork, mutual respect, camaraderie, and leadership development are held in the highest regard; and

WHEREAS, Niles Township High School District 219 has supported the chess program over the years, and in so doing has furthered its mission to improve the academic achievement of every student by offering programs such that every student may achieve his or her optimal potential; and

WHEREAS, Niles North High School has unveiled a prominent banner on today's date recognizing the accomplishments and congratulating the 2012 Niles North State Champion Chess Team, and that said banner will be displayed on the west side of the Niles North building and visible to all motorists who travel the 1-94 Interstate.

NOW, THEREFORE, L GEORGE VAN DUSEN, Mayor of the Village of Skokie, do hereby proclaim May 7, 2012 as

in the Village of Skokie and congratulate the members and coaching staff of the Niles North Chess Team on their many accomplishments, and wish each team member the very best in his future endeavors.

Congratulations to Niles North!
Posted by Bill Brock at 8:58 PM No comments:

That's enough inside baseball for now.
Posted by Bill Brock at 8:45 PM No comments:

Another game for the ages

I used to wonder why GM Larry Evans stopped writing about chess and became obsessed with chess politics.


The 1st President of Kalmykia, President of the World Chess Federation (FIDE) Kirsan Ilyumzhinov visited Syria on 28-29 April 2012. As Mr. Ilyumzhinov noted, on the 29th April he had a three-hour talk with the President of Syria Bachar Assad in Damascus. Mr. Assad underlined during the discussion, that he tasked the Syrian Ministry of Education to sign an Agreement to join the "Chess in Schools" project with the World Chess Federation. Mr. Ilyumzhinov informed the "Nezavisimaya Gazeta" that "in early June, as a dedication to the International Day of Children, we are planning to organize the first international youth chess tournament, where young players of Arab countries, will participate, in Damascus". The FIDE President did not exclude the possibility that Mr. Assad might participate in the opening of the youth chess event. According to Mr. Ilyumzhinov, "The Syrian President plays chess very well - since his studies in London".

[....] During the discussion the Syrian President informed Mr. Ilyumzhinov of his intention to invite H.H. the Dalai Lama to Syria on an official visit. Ilyumzhinov said: "President Assad said that on the Syrian territory there is one of the most ancient Buddhist temples erected about two thousand years ago. He would like to invite H.H. Dalai Lama to sanctify this temple".


Back to chess shortly!
Posted by Bill Brock at 3:02 PM No comments: