Another $5 Swiss at the Evanston Chess Club this Saturday!

ICA President Tom Sprandel and his wife Marie will be emulating Kerouac this summer (but Tom will still be running the ICA show via phone and the Intertubes).  If he's not too busy with last-minute packing, you may have a chance to wish Tom bon voyage!
Posted by Bill Brock at 5:38 PM No comments: 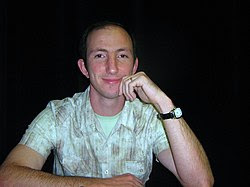 The Israeli GM presents several of his positions from the Chicago Open and asks you to find the best move.
Posted by Bill Brock at 5:18 PM No comments:

The kids are getting out of school soon, and Chess Education Partners has wonderful camps taught by masters to keep their mischievous minds (ages 6 to 14) occupied:
Follow this link for more information!
Posted by Bill Brock at 11:07 AM No comments:

"A Parent's Perspective on the Chicago Open"

The Check Is in the Mail

Interesting correspondence game by Dr. Tansel Turget of Decatur, who is a strong over-the-board player and an extraordinarily deep correspondence player. 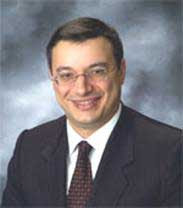 Noah's Ark on the Kingside?

In the previous post, I mentioned the silly trap 1.e4 c5 2.Bb5?! a6 3.Ba4?? b5 4.Bb3 c4 and Black wins a piece. As you can see from the game below, the mirror image of this on the kingside is also a trap - but for Black! Pushing all the pawns in front of your king is dangerous!

Posted by Frederick Rhine at 6:09 PM No comments: 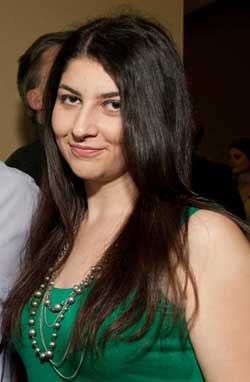 Chess is not all about the Benjamins (there are much easier ways to make much more money), but when a class player wins a large prize, that usually means the player has made exceptional improvements in his or her game.  Here are some local players who did very well this weekend:

In the Under 1500 section, Todd M. Scarlett and Christian Kavouras earned $2,500 apiece for their 6-1 score.  Adele Padgett (who tied for first in the Illinois Girls Invitational), Rob Eaman of CICL fame, and Alexander Bologna each won $650.

Congratulations to our local prizewinners and to all who played well!
Posted by Bill Brock at 4:20 PM No comments:

The Illinois Chess Association will be offering conditions to Illinois GMs and IMs.
Posted by Bill Brock at 3:09 PM No comments:

The 2008 U.S. Champion and second-place finisher in the 2010 U.S. Championship is offering three separate day camps:
You'll find a link to registration and contact info at this link.
Posted by Bill Brock at 2:57 PM No comments:

Erik Karklins is my hero

The elder Mr. Karklins is 95 years old, and he scored 5-2 this weekend in the Under 2100 section, winning $150!  Erik closed out the event with three straight wins against players with ratings solidly above 1900.

The Dutch grandmaster recently wrote an article for New in Chess about his American travels: playing in US events was a good way to spend time with special Facebook friends, but not an especially good way for unlucky Loek to make money (I'm paraphrasing from memory).

This Memorial Day weekend, however, Van Wely won six games and drew three: 7.5 points was good for 10,000 and clear first in the Chicago Open!

The event was strong enough to attract attention in Armenia.  (Translation here.)

My general impression: aside from tournament visitor Yury Shulman (who's been doing his part lately), we in Chicago need to up our level of play to compete with the rest of the world.  GM Mesgen Amanov was the top local finisher with 6 points out of 9.

Among local juniors in the Open Section, Adarsh Jayakumar drew GMs Ehlvest and Lein, and could have drawn GM Finegold (coulda woulda shoulda), NM Eric Rosen dropped IM Daniel Fernandez.  Tommy Ulrich had an even score after five rounds and gained a ton of rating points.

I scored 2 points out of 7 and appear to have gained a few points!

More results from the other sections as soon as I recover from my "chess hangover."  Full results here!
Posted by Bill Brock at 1:54 PM No comments:

Posted by Bill Brock at 5:14 PM No comments:

Caïssa giveth and Caïssa taketh away....

...is a fancy way of saying that chess luck tends to even out.  Dana Mackenzie demonstrates the wins he missed against Gavin McClanahan and me.
Posted by Bill Brock at 5:06 PM No comments:

I have yet to beat Andrew Karklins.  On Saturday, I botched my best opportunity to date: 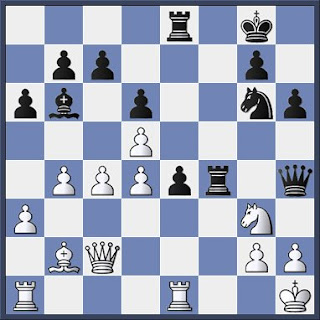 A. Karklins - Brock, 2010 Chicago Open
White to play
Although I was feeling optimistic here, I'm struggling for equality if Karklins shuts down my bishop with the natural 24.c5.  Instead, he erred with another natural looking move, 24.Re3?

I found the first move of the (probably winning) combination but went wrong in the complications (there are several cute points, one of which Karklins used to turn a probable loss into a well-deserved win).

See if you can do better than me!  Use your brain, not the computer!
Posted by Bill Brock at 1:07 AM 6 comments: