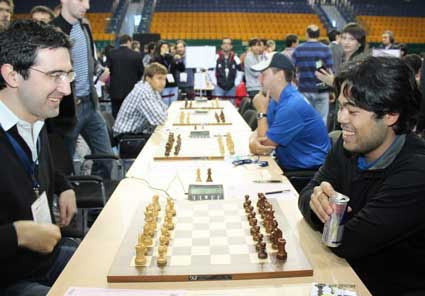 
Click here for coverage!
Correction to my last blog entry: would you believe the Russians have five teams??
Posted by Bill Brock at 11:14 AM 1 comment:

Russia has three teams in the Olympiad: the USA just lost to Russia's #1 team 3-1.  Ouch.

Shulman won a pawn against Malakhov, but not quite enough!

Hungary just beat China: Judit Polgar is going to score massively on Board 3.  Thanks to a win by Aronian, Armenia beat Russia 3 (whose first three boards are Jakovenko, Motylev, and Rublevsky!).

Several matches are finishing right now: check it out here.

P.S. Jobava beat Magnus Carlsen in the Georgia-Norway match.
Posted by Bill Brock at 8:50 AM No comments:

The persuasively charming duo of Fred Furtner and Rob Eaman talked me into returning to the Chicago Industrial Chess League.  If you'd like to play in the CICL, check out the FAQs.

This was the inaugural match for Trading Technologies: first board Josh Hunter won two pawns against me in the opening, and I was more than a bit nervous.

If you've never seen a simultaneous exhibition before, or you've never visited the Evanston Chess Club before, next Tuesday is your chance!

Only a few seats remain for our Simul next Tuesday, 9/28. Register by email now to hold your place.

Bring your best game and challenge NM Jon Burgess in a simultaneous exhibition. Entry fee is FREE. NM Burgess will play up to 10 players. Boards are first-come-first-served. To reserve your board, send an email to enter@evanstonchess.org, including your name, rating and phone number. Like our Tuesday evening club meetings, this event is limited to players high school age and older. We will have open club play for those who don't play in the simul.

For those who have never played a simul: The master plays white on all boards, all challengers play black. The master will make his move at your board, then go to the next board. You will wait to make your move as black until the master returns to your board and is watching. Challengers are allowed up to three "passes" when the master comes to their board. Score sheets will be provided and we hope to publish as many of the games as we can.

Thanks to Jon Burgess for doing the simul!

Not quite correct, but quite entertaining! I don't know any games of Jelen other than this one: the loser can be very proud, too!

Wins by Krush and Zatonskih on Boards 1 and 2

At 7-1, the US is among the leaders, though not much is expected of this team because of the firepower of Russia, China, and Ukraine.  We'll see!

Results and games here.
Posted by Bill Brock at 1:18 PM No comments:

After two rounds, the USA is solidly among the leaders with 7½ points.  I believe that Ukraine, Poland, and dark horse Georgia all have a perfect 8-0.

Games are here!  If you click on the floppy-disk icon in the upper-right hand corner, you can download PGN from Rounds 1 and 2.
Posted by Bill Brock at 1:12 PM No comments:

In the Cuba-Turkmenistan match, Mesgen Amanov lost to one of the top players in the Western Hemisphere, Cuba's Leinier Dominguez Perez.

I won't have time to try to digest this interesting-looking game (Sicilian Najdorf, English Attack), but you might take a look for yourself.
Posted by Bill Brock at 1:00 PM No comments:

Board 4: A smooth win by Eric Rosen

White gets the two bishops, but the pawn structure after 22...f5!? 23.Kh1? d4! was made for knights. How could White have made the position more bishop-friendly?

There's a lot of tacking between moves 22 and 36: note that Black has already doubled on the g-file by move 29, but waits until move 36 to break. It's all about control: Eric doesn't create the crisis until all the positional details are in his favor.

IM Angelo Young played very creatively in this game and got a pleasant pull in the endgame.  But Rensch found some good defensive moves, and Angelo is forced to milk a suddenly unpromising position.  Around the time the Blaze clinches the match, Young overextends and is forced on the defensive.  A rook and knight ending in time pressure is no picnic! 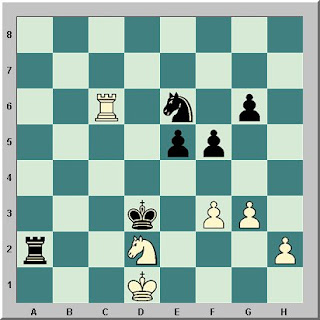 Young-Rensch, US Chess League, September 20, 2010
White to play and draw
White has a virtually forced draw in this position: can you find it?

What move did the International Master and five-time Illinois Champion make in time pressure?
It's easy to make a silly mistake when you're trying to win a drawn position for the team's sake.  (So go easy on yourself the next time you blunder!)
Posted by Bill Brock at 9:32 PM 3 comments:

Over in Siberia: Board 3 for the Faroe Islands is kinda strong!

Yury Shulman won this game very smoothly, as the US got off to a 4-0 start.  Chicago's other home team, Turkmenistan, rolled 4-0, with Mesgen Amanov sitting out round 1.

But the Faroe Islands (population less than 50,000, or less than 1/140th the population of metropolitan Chicago) fields a very respectable team!
Posted by Bill Brock at 8:00 PM No comments:

Board 2: A very strange draw

I honestly don't understand this game!  I think Black was more or less OK after 10...Qa5, but that Felecan probably overestimated White's "primitive" mating attack: 14...fxg6 seems playable.  It's not clear that White is winning the final position, but in the final position, White seems to have the choice between a pleasant middle game and a a pleasant endgame.

Posted by Bill Brock at 6:23 PM No comments: 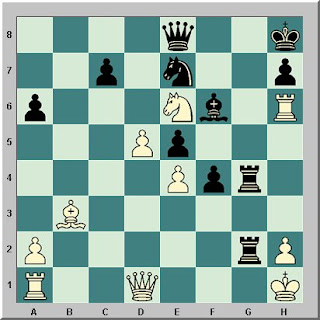 As you might imagine, everyone who played Morphy died long ago. The lowest Morphy number held by anyone alive today is 3. Until very recently, it was thought that there were only a handful of living MN3s. Kingston in his article pointed out two: GMs Andor Lilienthal and Arturo Pomar. Lilienthal played R.P. Michell at Hastings 1934-35; Michell played the Rev. John Owen at Hastings 1895 (Amateur Section); and Owen played Morphy a number of games in 1858. Pomar played a match against Jacques Mieses in 1946; Mieses played Louis Paulsen at Nuremberg 1888 and Henry Bird at Hastings 1895; and both Paulsen and Bird played a number of games against Morphy. Leonard Barden, in his comments to another article about Morphy numbers, by Tim Harding, added three more living MN3s, all of whom played Mieses in the Premier Reserves section at Hastings 1948-49 or 1949-50: Dennis Horne, Peter Swinnerton-Dyer, and Barden himself.

Sadly, the great Lilienthal died earlier this year at age 99. That left only four living MN3s from the Kingston-Barden list. But wait, there's more! On April 28, 1938, 8-year-old Melvin Chernev (Irving's son), played a game against Emanuel Lasker (MN2) when the great man visited the Chernevs' home. Melvin Chernev lives near San Francisco; I spoke with him on the phone in June of this year. He is the fifth known living player with a Morphy number of 3.

Chicago's own Erik Karklins, age 95, recalls losing to Lasker in a simul in Riga, Latvia circa 1928. Karklins is thus the sixth known living player with a Morphy number of 3.

T.H. George of Essex, England may have been the last surviving player with a Morphy number of 2. The British Chess Magazine wrote in his 1971 obituary, "Essex chess players suffered a severe loss with the death of T.H. George on April 19th at the age of 85. He was the doyen of Essex chessplayers . . . . He was rather proud of having played a man who had played Morphy. This happened in his young days when he beat Jas. Mortimer in a club match; Mortimer had played friendly games with Morphy in Paris in the early sixties of the last century." British Chess Magazine, July 1971, p. 249. The claim that Mortimer played Morphy is corroborated by Chess Monthly, which had an article about Mortimer (1833-1911) in 1892. "In 1853, he was appointed attaché of the United States Legation in Paris, where he had an opportunity of renewing his acquaintance with Paul Morphy. The two countrymen thus became intimate friends. Both being passionately fond of chess, many hundreds of games were played by the master and pupil . . . ." Chess Monthly, Sept. 1892, p. 66.

Leonard Barden, in an e-mail to me yesterday morning, made a fascinating point:

Mortimer played Znosko-Borovsky and (most notably) Tartakover at Ostend 1907 which blows up Morphy 3 as a finite one-hand number[.]

I reckon now the traceable living Morphy 3s number around 15-20.

Other opponents of Tartakower's who are still living include Fridrik Olafsson, Lothar Schmid, and possibly Gudbjartur Gudmundsson. In addition, Mortimer played Marshall at Monte Carlo 1902, and Marshall played Louis Levy in the 1941 Marshall Chess Club Championship. As far as I can tell from the USCF and FIDE websites, Levy is alive and living in California.

One wonders whether anyone alive today played Frederick Karl Esling (1860-1955). Esling, who became the first Australian champion in 1886, won an offhand game against Adolf Anderssen in 1878. Unfortunately, he does not seem to have played much in his later years; the last game of his that I have seen was from 1922. Since Anderssen of course played a match against Morphy, anyone who played Esling would have a Morphy number of 3 (and, incredibly, an Anderssen number of 2, even though Anderssen predeceased Morphy). UPDATE: According to Chess World, Vol. 5, No. 7 (July 1, 1950), page 156, Esling's last serious chess game occurred in 1924, when he played for Victoria in a match against New South Wales.

I played (and managed to draw) a 15-minute online game against Barden earlier this year, giving me a Morphy number of 4. But I also played two simul games against Bisguier around 1978, making me an MN4 through the Bisguier-Tartakower-Mortimer route as well.

ADDENDUM: Barden has pointed out on the English Chess Forum that Mortimer also played Ossip Bernstein at Ostend 1907. Bernstein lost to Frans Kuijpers at the 1961 IBM tournament. That apparently makes Kuijpers, now 69, the youngest living MN3. Bernstein also played Bent Larsen, who died earlier this month, twice at the 1954 Olympiad.

UPDATE: I have stricken through the names of MN3s who have died since this was first posted.
Posted by Frederick Rhine at 12:06 AM 11 comments:

A crush on Board 1 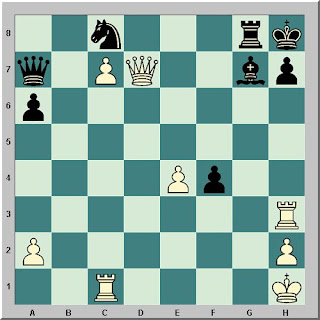 Gurevich-Barcenilla,
Chicago Blaze - Arizona Scorpion
U.S. Chess League September 20, 2010
White to play and win quickly
Dmitry Gurevich is a specialist in the 9.Ne1 variation of the King's Indian.  He decides that maintaining a knight on e6 is worth a little trouble, and he's proved right!

Catching up on last week's news: the Blaze lost their first match, 3-1 to Los Angeles.

Tonight, the 2½-1½ Blaze take on the 4-0 Arizona Scorpions.  I am pinch-hitting as TD; therefore, it would be unethical for me to guarantee victory.  Betsy Dynako has volunteered to TD, so I am now free to guarantee victory.  (If we don't have a offensive line that can block, we'll go to the three-step drop and play West Coast Offense.)


Or stop by the North Shore Chess Center at 5500 West Touhy Avenue, Suite A, in Skokie!
Posted by Bill Brock at 12:11 PM No comments:

Local angles: Grandmaster Yury Shulman of Barrington is once again representing the USA, this time on Board 4.

Grandmaster Mesgen Amanov of Northbrook is once again representing Turkmenistan on Board 1.
Posted by Bill Brock at 12:05 PM No comments:

We already knew that Donald Trump needs attention. I don't know what to say about silliness like this, however.  (Here's the proposal on Kirsan's own site.)  For those of us who have grown sick of both the manufactured "Ground Zero mosque" controversy and the 2010 FIDE election, I suppose we can save time expressing our contempt.
Back from hiatus shortly...not with links to music videos or fashion shows or contrived contretemps, but with notes about the game of chess.
Posted by Bill Brock at 7:06 PM No comments:

From the new Arcade Fire album The Suburbs

Posted by Bill Brock at 6:50 PM No comments: