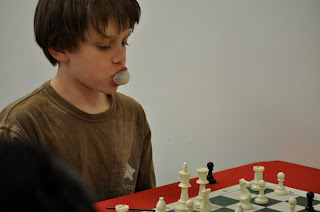 Check it out!  AF4C has a substantial Chicago presence.
Posted by Bill Brock at 7:09 PM No comments:

Here's the 2nd round game between NM Eric Rosen and NM Adarsh Jayakumar from this weekend's Denker Qualifier.  As both players had dropped points in the first round, the loser would be eliminated from contention for first. 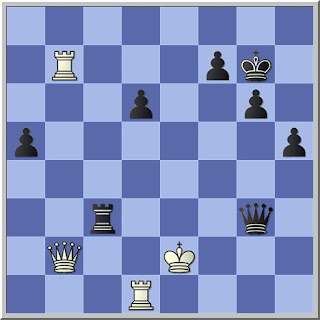 Rosen-Jayakumar, Skokie 2011
Black to move
So you're playing the Black pieces in the position above.  You've just made the "standard" rook for five pawns sacrifice, and White's king is walking.  But you're living off the thirty-second increment, which means you've got to come up with the best move quickly.  What do you do?

Look for the answer (and annotations) on the ICA website  in a few days.

Special thanks to Adarsh Jayakumar for seeing the humor in this painful loss!
Posted by Bill Brock at 8:57 AM No comments:

The Filipino IM Julio Catalino Sadorra, who plays for the University of Texas at Dallas, just earned his third GM norm in a grandmasters-vs.-UTD students "Scheveningen style" event.

So what's the Chicago connection, and why am I linking to an article in a Manila business paper?  The answer: Tim Redman.
Posted by Bill Brock at 10:08 PM No comments:

Wow: Trevor joins Kayin Barclay and Yelena Gorlin as a two-time winner of the Illinois High School Invitational Championship title(*).  As in 2009, Trevor will represent Illinois in the Denker Tournament of High School Champions.  After losing to freshman Sam Schmakel in round 2, Trevor reeled off consecutive wins against Michael Auger, Jonathan Kogen, and NM Eric Rosen to take clear first with a 4-1 score.

I expect Tommy Ulrich to earn his master title soon.  He was leading the tournament until losing to Rosen in round 4, and took second on tiebreaks with 3½-1½.  NM Adarsh Jayakumar was essentially eliminated from contention after being held to half a point by Kogen and Rosen in the first two rounds, but won out to tie for second with Ulrich.

(*)  P.S.  I was reminded that NM William Aramil also won the Illinois Denker Qualifier twice, not to mention the Denker!  So there's a new goal for Trevor....
Posted by Bill Brock at 10:29 AM No comments:

Cheryl Liu beat Victoria in the round three encounter of the leaders, but then Cheryl lost to Rachel Ulrich (who was ten years old the last time I asked!) in round 4.

Andi Rosen organized for the Illinois Chess Association; Sevan Muradian directed.
Posted by Bill Brock at 10:07 AM No comments:

A note to parents

Rumor has it that some parents (no one's given me any names) want the PGN of their young stars' games embargoed until after the national championships.  Carlsen, Anand, and Aronian don't have this luxury!

Wouldn't it be better to publish the games, warts and all?  Then the young players can discover their opening errors, correct them, and prepare their repertoire in even greater depth?  This worked for Fischer.
Posted by Bill Brock at 9:57 AM 1 comment:

The Illinois Chess Association held its first "Barber Qualifier," to select the Illinois representative to the USCF's new tournament of K-8 state champions, named in honor of retiring scholastic organizer Dewain Barber.  The event, held at the North Shore Chess Center in Skokie, was organized by Andi Rosen of the Illinois Chess Association's Warren Junior Program and directed by Sevan Muradian.  Sixteen of the top K-8 players in the state were invited.

Zachary Holecek and James Wei tied for first with 4-1 scores; Zachary won on tiebreaks.  Gavin McClanahan and Max Zinski tied for third with 3½-1½ scores.  Conrad Oberhaus and Day One leader Bryce McClanahan tied for fifth with 3-2 scores; Penny Xu and Nathaniel Kranjc had even scores. 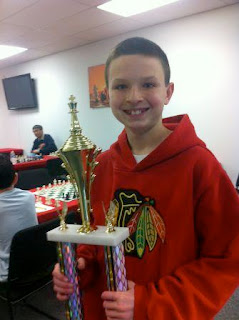 
Zachary Holecek is a five-time Illinois State Champion [...] winning his 17th place as a preschooler in K-3 section and winning his first state title in Kindergarten.
He loves chess and keeps busy with his other activities (basketball, soccer, scholastic bowl, and assists Dave Monatelli with the Sprague elementary chess team).

Posted by Bill Brock at 9:53 AM No comments:


The Fenwick Chess Team ended the season in third place in the Chicago Chess Conference.  Chess players compete both as a team and as individuals. Senior Ian Kowalski played the "first board"--the most competitive position in team chess.  He ended the regular season in first place in the conference and then won the individual championship in a tournament held at St. Patrick's High School on Saturday March 25th.  Kowalski and senior Jen Concepcion completed the five-round regular tournament in a four-way tie with two players from St. Patrick's.  In a two game blitz playoff (an overtime in chess play,) Ian took first place and Jen placed fourth.

The Chicago Chess Conference consists of the Catholic High Schools in the Chicago metropolitan area.

Posted by Bill Brock at 9:20 AM No comments: