Adarsh Jayakumar, on the hunt for his final International Master norm, played in international events in Chennai and Delhi last month. I think it would be easier to pick up an IM norm in Europe than in the land of 1.2 billion fans of Vishy Anand. Adarsh dropped a few points on the trip, but he had some very interesting games, and he kindly sent a few of them with notes.

In the general case, two bishops are much better than two knights when each side has five pawns or fewer. And as pawns get exchanged, the long-range bishops get more scope grow in power.  But if the player has the two knights has an extra pawn, the ending is bound to be nerve-wracking.

In pawnless endings, two bishops are theoretically able to evict the knight from a blockade position. In a tournament game, the fifty-move rule comes into play.

"Wicker Park Chess Tables Causing a Stir, Could Get Ripped Out" 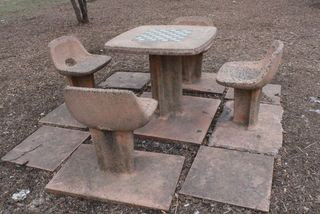 Story at DNAinfo.com. This is not the first time that chess tables have been targeted in the name of eliminating "undesirables."

Let's get rid of drug deals in the parks, but let's keep chess (and even dominoes) in the parks.

P.S.: Chess-friendly 1st Ward Alderman Proco Joe Moreno is on the case.
Posted by Bill Brock at 12:55 AM 1 comment:

If you pick "online entry" from the dropdown box, you'll be able to enter.

I won't be at any of this weekend's great events (work: bummer), but I will be stopping by the Amateur Team on Sunday afternoon.
Posted by Bill Brock at 7:09 PM No comments:

It's already a very nice field!

Save a few bucks and enter your team before Friday!
Posted by Bill Brock at 7:04 PM No comments:

YCFC at Northside Prep this Saturday!

Rumor has it that Northside Prep isn't easy to get into.  But follow the instructions below, and your scholastic team shouldn't have any problem this coming Saturday!

February 16th Tournament at Northside
Northside College Preparatory High School
5501 N. Kedzie (3200 West), just south of Bryn Mawr
Schedule:  Registration   9:00 - 9:30
Tournament  10:00 - 3:00
Trophy Presentation  3:15 (est.)
All players must check-in at the tournament site by 9:30!
Late arrivals will not be paired in the first round.
5 Sections:  Novice K-2, Novice 3-4, Novice 5-6, Novice 7-8, Advanced
Unrated, no entry fee
Swiss-style, 5 rounds (est.), USCF standard tiebreaks
G/20 + 3 sec. increment in Advanced section when clocks are available
Notation required in the Advanced section
Awards:  Individual trophies to the top 7 in all novice sections,
and to the top 6 in the advanced section.  Team trophies
to the top two teams in all novice sections, and to the
top team in the advanced section.  Team score calculated
by top four scores in novice sections, top three scores
in advanced.
Entries:  YCFC uses a roster system for tournament entries.
All players on submitted rosters are eligible to play in
any YCFC tournament during the scholastic year.
Submit rosters, including name, grade, school and
section to accounting@apartmentpeople.com, or by
fax to 773-248-1007, attn: Mike Cardinale, no later than
Thursday, February 14th.
All players must check in on site by 9:30.
Coaches:  Please let me know if you plan on attending with
a rough estimate of the number of players by
Thursday, February 14th.
Thanks to Dan Caldwell for welcoming us back to Northside, with
able assistance from Mike and Lydia Bologna and the Northside
Mustangs chess team!
Posted by Bill Brock at 5:17 PM No comments:

About 30 years ago, FM Albert Chow told me that the Sicilian Defense was unsound, and that it was a matter of time before it was refuted. I laughed. He insisted that he was serious: while White's 1.e4 is an eminently logical move, 1...c5 was a silly move that does nothing for Black's development. Chow said that I had contributed to the ultimate refutation of the Sicilian with my win over David Sprenkle. I shook my head in disbelief. How could the venerable Sicilian, beloved by great players by Fischer and Kasparov, ever be busted? Marc Esserman's book Mayhem in the Morra! features a newspaper headline on its cover: "Sicilian Refuted! Morphy and the Romantics Run Wild!" While I'm sure Esserman would admit that this is hyperbole intended to be funny and sell more books, he makes a much stronger case for the Smith-Morra Gambit than I could have imagined. As the following game illustrates, declining the gambit with 3...Nf6 (transposing to the Alapin Sicilian) is not a panacea. Was Albert right? Black's resignation was premature, particularly given that this was a blitz game. The variation given at the end is Houdini 3's analysis of what might have happened.
Posted by Frederick Rhine at 3:08 AM 2 comments: