Twenty-four hardy souls braved snow, ice and bitter cold to play in the Evanston Rapids (game/29) on Saturday, January 22 at the Levy Senior Center. Enterprising (read "dubious") play and a little luck gave yours truly a 5-0 sweep in my first rapid tournament ever, and my first OTB tournament of the millennium! (Yes, you read that right; my last OTB tournament was in 2000, which purists will tell you is part of the prior millennium (1001-2000).) Theodore Mercer, Jr. and Jiri Kabelac tied for second at 4-1. Kabelac missed a draw in a king and pawn ending against me in round 4, with both of us having seconds left and playing on the 3-second increment.

Other notable results include Brian Harrigan of Indiana and Chad Hirsch, who both scored 3-2 and gained a boatload of rating points. Harrigan played the top three finishers, scoring 1-2 against us, and went from 1385 to 1505. Hirsch, rated just 1292, downed two 1600s and a 1700, gaining 166 rating points. The crosstable is here. (Don't ask me why the USCF claims I had a provisional quick rating of 2201 going into the tournament - unless they took my 2201 "slow" rating and used that as a guesstimate of my quick rating.) Mariano Acosta, a Life Master at standard time controls, was one of four players who took a half-point bye in the first round. Unfortunately, his loss to Sergatskov in round 3 took him out of contention, although he won his other games.

Thanks to über-organizer Maret Thorpe for organizing and directing the event, and for inviting me to be the guest master. It was great fun.

© Algemeen Nederlands Persbureau
After 7 of 13 rounds, Nakamura takes the sole lead in Wijk aan Zee!  Anand is in clear second, while Kramnik and Aronian are tied for third.

Another exciting win today against Smeets! Tomorrow the tournament really begins as I play the big dogs in succession!

47 minutes ago via web

More at ChessBase and ChessVibes.

Prizes: Trophies to top 5 individuals in each section; winner of championship section earns invitation to play in the 6-player round robin invitational girls tournament the weekend of March 26-28. (If the winner would otherwise qualify by rating, the player with the highest score not otherwise qualified will receive the invitation).

Other: Sets and clocks will be provided by North American Chess Association.

I think that means that Nakamura beat the Dutch GM Erwin L'Ami in Round 6!  Viswanathan Anand and Alexander Grischuk drew, so Nakamura reclaims a share of first place.


The game is here: a nice grind from absolutely nothing.

A nice win today, but I feel horrible for l'Ami after that travesty yesterday. Anyway, Smeets tomorrow!about 2 hours ago via web


The "travesty" was L'Ami's blundering against Carlsen when defending a dead drawn rook & knight vs. rook ending (no pawns).
Posted by Bill Brock at 1:26 PM No comments:

The documentary Bobby Fischer Against the World just premiered at Sundance; it will be on HBO this summer.  More info here.
Posted by Bill Brock at 11:45 AM No comments:

North Shore Chess Center G/45- 4R-SS G/45 + 10/sec increment. North Shore Chess Center, 5500 West Touhy Ave Suite A, Skokie, IL 60077. 847.423.8626. EF: $20 for non-members of the chess center, $15 for members of the chess center received by 1/22. All $5 more onsite. Onsite registration - up to 15 minutes prior to round 1 or round 2. If registering prior to round 2, you will receive a half-point bye for round 1. Round times: 1pm for round one and then 15 minutes after final game from previous round completed. Half-point byes available in any round. Prizes: Book prizes for top three finishers. Biggest upset (150+ points): Free entry to following month G/45 + book prize. Parking: Free self-parking. Mail entries with registration information to: North American Chess Association (make checks payable to), 4957 Oakton Street Suite 113, Skokie, IL 60077. Online registration preferred. Additional questions email to: sevan@nachess.org USCF rated. For online registration and list of more events please visit http://www.nachess.org/events

He was tied for first with Anand until today's draw with Ponomariov: still in great shape at +2!
Posted by Bill Brock at 10:16 PM No comments:

The caudate nucleus is well developed in rats, mice, and chess masters

Chess masters use different parts of the brain than the rest of us: story here (Bloomberg) and here (MSNBC)

General conclusion: "Expertise is the result of long, serious training."  If you're interested in the subject (or if you want interesting reads with many thoughts applicable to many things beyond chess), I again recommend Gladwell's Outliers

and Lehrer's How We Decide 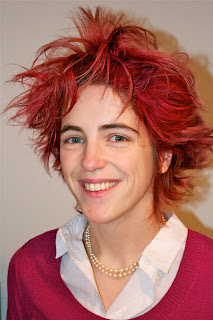 @GMHikaru Hikaru Nakamura
Some of the best technique I've ever shown in an endgame under pressure! Off to a great start, but it will only get more difficult!
2 hours ago via web
Posted by Bill Brock at 5:01 PM No comments:

All the major chess sites have coverage: I went to The Week in Chess.
Posted by Bill Brock at 2:51 PM No comments:

This one is a doozy. In the position below, it is White's move. Judit Polgar, the strongest woman player ever, is playing former World Champion Boris Spassky. Polgar played 12.Nf1 and eventually lost. Do you see anything better?

Posted by Frederick Rhine at 2:10 AM 4 comments:

Trying to form a team for the US Amateur Team?

I'm not able to play myself, except possibly as an alternate on Sunday (and for that I already have a standing invitation, thanks!)

If you'd like to play and you want to form a team (four players plus one optional alternate), feel free to post a request in comments here or on the Illinois Chess Association message board.
Posted by Bill Brock at 8:48 PM No comments:

Another cut-and-paste from my email:

Posted by Bill Brock at 8:31 PM No comments: