Saturday in Joliet: US Game / 15 Championship!

More info here!  Each player has 15 minutes to play the game.  With six games to play, Chicagoans can leave the city at 9 a.m. (registration ends at 10:50 a.m, but please don't come at the last minute!) and be home for dinner by 6 p.m.
Rumor has it that the reigning US Game/30 co-champion may play: appearance fees are still being negotiated.
Posted by Bill Brock at 4:18 PM No comments:

"Chess under attack in Bay Area" 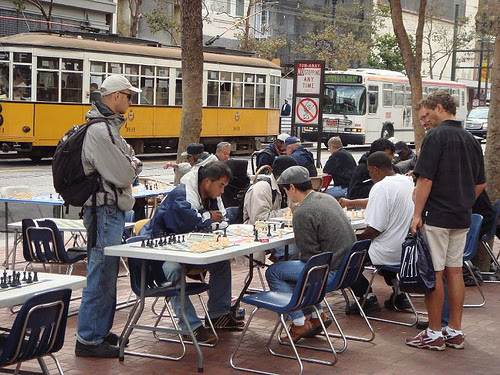 I think the comparison between Market Street in San Francisco and Harper Court in Chicago's Hyde Park is apt.  Chess is integral to the urban landscape: it shouldn't be confined to the lakefront.
Posted by Bill Brock at 4:04 PM No comments:

Dean Arond, whom I have known since we were on opposing high school chess teams over 30 years ago, recently won the following amusing tournament game against a player who shall remain nameless.

Posted by Frederick Rhine at 5:55 PM No comments:

A trap in the Kan Sicilian

Posted by Frederick Rhine at 5:18 PM No comments:

International Master Florin Felecan took first in the 26th North American Masters, held in Skokie on May 7-9 and June 11-13, with an impressive 7½-2½ score.

International Masters Angelo Young and Arjun Vishnuvardhan tied for second with 6½ points each.

NMs Gauri Shankar, Trevor Magness, and Jon Burgess were competing for International Master norms, but the IMs were not very accommodating in this event.    (Due to a family emergency, Burgess was unable to play the final four games.)

Crosstable here!
Posted by Bill Brock at 11:54 AM No comments:

The (in)famous Shirazi-Peters game, the shortest-ever decisive game in a U.S. Championship, provides another example of a queen check and fork leading to a quick win. After 1.e4 c5 2.b4?! (the dubious Wing Gambit) cxb4 3.a3 d5! 4.exd5 Qxd5, Shirazi fell into the known trap 5.axb4?? After 5...Qe5+, forking his king and rook, he resigned. IM Shirazi, a very strong player whose style may have been too "coffeehouse" for the U.S. Championship, went on to score .5-16.5 in the Championship. (In fairness, he played in other U.S. Championships, doing much better in some of the others.)

Posted by Frederick Rhine at 6:13 PM No comments:

Many, many opening traps involve a surprise queen check that picks up an errant piece. This includes the shortest decisive master game in history (apart from no-move forfeits, 1.c4 Resigns and such), given below. Black's 3...Qa5+ forks White's king and bishop, winning the latter. If you look at big databases, you'll see that this trap has also occurred a number of times since. Occasionally White has even drawn the game, despite dropping a clear piece on move 3! The website 365chess.com (highly recommended; it allows you free access to a 3.5 million game database) has seven games with this trap, two of which ended in draws!! The Black players who only drew were rated 2259 and 2199. These games provide further proof of the truth of the adages, "You can't win [or even draw] by resigning." and "The hardest thing in chess is to win a won game."

A trap in the Vienna Game

The British chess writer G.H. Diggle wrote an amusing account of having lost a club match game this way (Davids-Diggle, London 1949) in all of two minutes, while his teammates' games were just getting started. His later investigation revealed the same game had been played in 1899 between Imbusch and Goering (see Irving Chernev's 1000 Best Short Games of Chess, p. 6) and that the British Chess Magazine in 1901 had described 6...Kg8?? as "a common blunder in this and similar positions."

One downside of playing in out-of-state events

A moment of sympathy for Jim Egerton.  He comes all the way to Las Vegas to play chess.  He has to schedule a bye for Sunday evening to catch his plane back.  His opponent Sunday morning never showed up.  Not a very chess eventful day for Jim.

In multiple-section events, there will usually be someone else in another section with a similar problem.  So if one seeks out the TD, then one might be able to play a game (though probably not at the original time control; it takes one hour to claim the forfeit).
Posted by Bill Brock at 11:39 PM 1 comment:

A trap in the Robatsch

Posted by Frederick Rhine at 11:22 PM No comments:

This past weekend in Vegas, Dimitri scored a wonderful 5.5 in six games.  Welcome to Class A!

Hat tip to Daniel Parmet at on the ICA Forum.

(And when there's a nerd alert on a chess blog, you KNOW it's alpha nerdy!)

The path planning and promotion features are impressive/hilarious.

This LEGO Mindstorms set will be at the Brickworld convention here in Chicago this coming weekend, June 17-20!
Posted by Bill Brock at 12:13 PM No comments:

Jack Peters reports.
Posted by Bill Brock at 11:32 AM No comments:

Matt Pullin explains a very nice pawn endgame study. I guessed the first two moves immediately, but it took me awhile to fathom the point.