Boris Becker on tennis and chess

Here's an entertaining miniature that Nigel Short played against Boris a few days ago. Becker never got to use his backhand, er, his queenside pieces.
Posted by Bill Brock at 9:00 AM No comments:

There's a bit more info in this ChessBase article.
Posted by Bill Brock at 2:55 PM No comments:

Kasparov: "The Risks of the Reset"

You won't often find this lefty recommending links to Heritage Foundation talks, but here's one. You'll find the Q&A here.
Posted by Bill Brock at 1:29 PM No comments:

Email ThisBlogThis!Share to TwitterShare to FacebookShare to Pinterest
Labels: Garry Kasparov, Heritage Foundation, The Other Russia

My favorite chess app for the iPhone / iPad

As of now, it's tChess Pro version 1.7.1.  I've been using it on the iPhone for almost three years: the interface is easy and intuitive, the features are nice, and the playing engine is reasonably strong.  (I lost the first game I played against it, and many more since then.) There may be stronger engines, but tChess is snappy!

There's a dual core option on the iPad 2: not sure how many ELO this would add.  But if you're looking for raw strength, the iPhone and iPad are the wrong platforms.

Most of these screenshots are from my iPad, with the exception of one iPad screenshot grabbed from the developer's website.  But the iPhone look and feel is very similar: I don't feel all thumbs with this GUI even on a tiny screen (compare my ChessBase 1.1 hatefest, which was essentially a rant about ChessBase's GUI.) 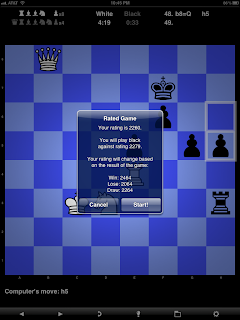 I'm about to start a new game. 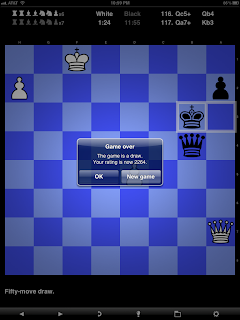 Grr...only a draw. (Trust me, I wasn't going to show you a screenshot with my usual rating of 1650.) And tChess was not set to play at full strength. 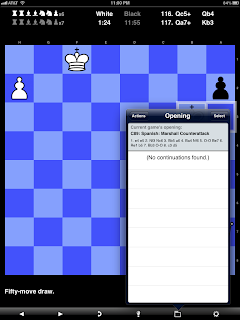 I can find out that the game was a Marshall Attack, ECO code C89. 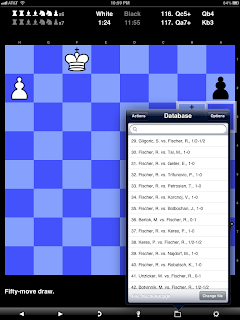 Perhaps I should look at a Fischer game instead. Or I could look at the game that one of my Industrial League teammates just sent to me. Or I could open a database of my own games. Or I could play through the tournament game I just played on my iPhone, identify my gross tactical blunders, and email the game score to myself. (My biggest complaint: tChess Pro does not support any variations within PGN. It really should.)

You can have up to 25 PGN files on the device: before I started this review, I had twenty on my iPhone. One can copy and paste PGN into tChess, and perform some basic editing on PGN headers. Even the ChessBase of twenty years ago had far more advanced database features, but the ease of accessing the game you've forgotten is a delight. 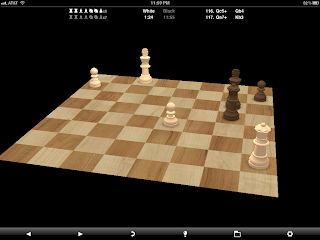 I've never cared for 3D representations of the chess board: if I want 3D, I'll get out a set. But some folks think this is cool.

Frustrated by your ratings history? Delete and create a new player profile.

Another reason to enter the Illinois Class Championships this weekend

World under-8 champion Awonder Liang will be there!  I hope he's playing up: it's necessary to beat the prodigies while they're still young.


Join us this coming Saturday and Sunday at the Orland Park Cultural Center.

Yesterday, GMHikaru tweeted, "The single most important thing in life is to believe in yourself regardless of what everyone else says" After Nakamura's disastrous showing in the Tal Memorial in Moscow, this blogger was one of the doubters. It is good to be proven wrong!

In the first four rounds of this event, Nakamura has drawn Kramnik, beaten Aronian, lost to Carlsen, and beaten Anand. That's +1 against the top four players in the world.

In the Classical King's Indian, White's kingside attack arrives first.  Indeed, in the position after move 21, it looks like Nakamura is about to get swept off the board.

But Black is attacking White's king!  If Black breaks through, Black will bring pain.  The biggest win in Hikaru's career?

More to follow!
Posted by Bill Brock at 3:26 PM No comments:

I've belonged to the iPhone cult for several years. The iPad that I've owned for two days is kinda nice, too. Look for chess software reviews in coming weeks.... One problem with the iWorld is that it's not flash-friendly, and we're using ChessFlash to present games. Advice would be appreciated!
Posted by Bill Brock at 11:16 PM 3 comments: