Free scholastic event next Saturday, May 8, at Bateman School!

Details are here: if your child would like to play, please follow the instructions!  Bateman School is in the Irving Park neighborhood.
I've heard nothing but good things about the Youth Chess Foundation of Chicago events.
Posted by Bill Brock at 4:21 PM No comments:

Nice game/30 minutes event on Southwest Side next Saturday 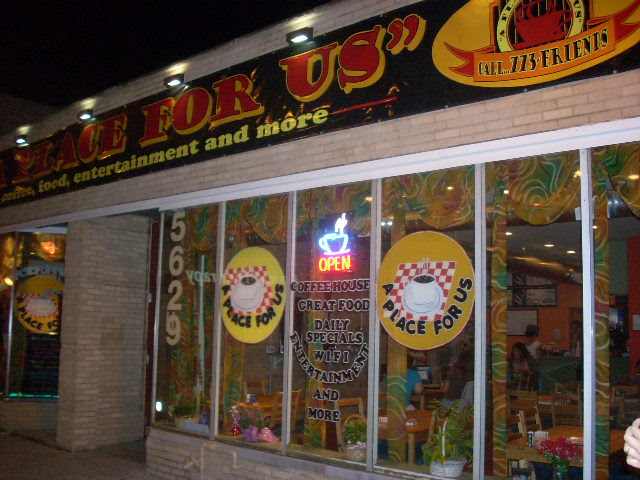 If 63rd and Central-ish is your neck of the woods, there may be a place for you next Saturday, May 8, at A Place for Us.

Details, as always, on the ICA Tournament Calendar.
Posted by Bill Brock at 4:09 PM No comments:

Email ThisBlogThis!Share to TwitterShare to FacebookShare to Pinterest
Labels: A Place for Us, ICA Tournament Calendar

With the match half over, the score in Sofia, Bulgaria , is 3½ points for World Champion Viswanathan Anand and 2½ ponts for former champ Veselin Topalov.  In games 5 and 6, both Anand and Topalov played at an extremely high level.  But if you're an amateur like me, you don't have to feel guilty about skipping these very interesting draws.

More free English-language coverage at the official site and here:
And there's good gossip as always at The Daily Dirt.

Tomorrow is a rest day: play continues at 7 a.m. Chicago time on Monday, May 3, with Anand having White a second consecutive time.
Posted by Bill Brock at 3:55 PM No comments: 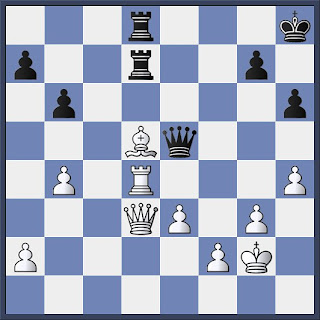 In The Complete Hedgehog, Volume 1 (my Saturday afternoon pleasure reading) Shipov observes that White's winning move is a "standard shot, from a child's book of tactics, but it's easy to miss over the board."

Posted by Bill Brock at 3:23 PM No comments:

Find out what they're up to at the ICA website.
Posted by Bill Brock at 1:57 PM No comments:

Basic Mates from _The Middle Game in Chess_ (3)

Before the computer age, even World Championship contenders made minor errors in beginners' books.  Fine was right to find a mate in 7, but he missed a mate in 3. 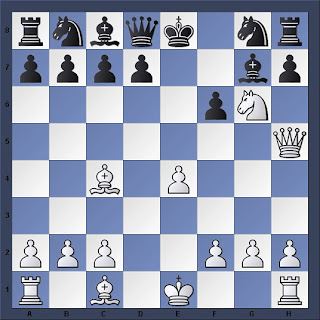 White to play and mate in less than ten moves
(it can be done in three moves!)

Posted by Bill Brock at 5:55 AM No comments:

Anand can be very funny in his low-key fashion.  Video from ChessVibes.

Ian Rogers compiles interesting sites for you to get your daily World Championship fix.  Here's one I hadn't seen before:

[...] Bulgarian GM Dejan Bojkov dejanbojkov.blogspot.com/ [...] has the advantage of attending the match and writing after watching the nightly Bulgarian television programme on the match.

Bojkov's comments (making allowances for his writing in a foreign language) are indeed very astute.  I've read a lot of nonsense on 15.Qa3!? (or 15.Qa3?!, if you prefer), but Bojkov gets to the point:

[Anand's] idea is obvious, White is clearing the d6 square, and is getting rid of the strong defender on e7. On the other hand he exchanges pieces, and doubles his pawns, which are serious drawbacks. But I believe that this is part of Anand's general strategy in this match- he will look for dry positions, with long-lasting initiative as White, and try to force Topalov to defend as long as possible, to torture him. Something similar did Boris Spassky, in his match against Mikhail Tal in 1969.

Round 3 was a draw: Anish Giri wraps up on ChessBase.
Posted by Bill Brock at 1:45 PM No comments:

Nakamura traded to the Cardinals 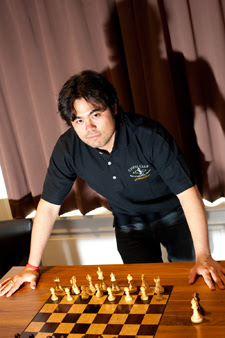 Good news for U.S. chess!
Posted by Bill Brock at 1:34 PM No comments:

Basic Mates from _The Middle Game in Chess_ (2) 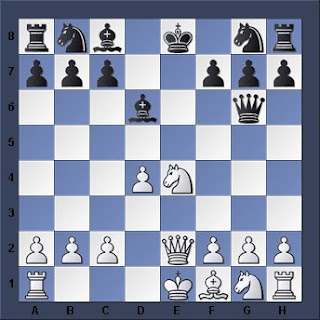 I'm told that discovered checks are strong...which one is strongest?

Posted by Bill Brock at 5:24 AM No comments:

From ChessVibes: Here's the Game 2 link.

Both Anand and Topalov spend much of the year in Spain: Anand's Spanish is excellent.

Rook endings on You Tube


And in the second video on this ending, where is Black's forced win after the bizarre-looking 4.Kh4!? (instead of 4.Rc2, which I think makes the win easy)? I'm pretty sure that Black should win, but the direct encircling maneuver fails to a White counterattack on d6.
Posted by Bill Brock at 5:42 PM No comments: 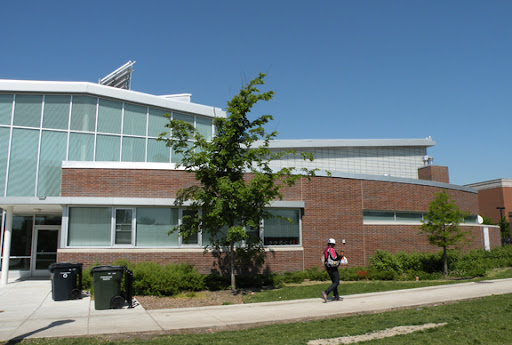 Posted by Bill Brock at 1:20 PM No comments:

Basic Mates from _The Middle Game in Chess_

In the late 1930s, GM Reuben Fine was a top contender for the World Championship.  Here are a few problems from his 1952 book The Middle Game in Chess.  (The book was republished in 1993, but the Amazon reviews of that edition suggest that it's full of typographical errors.)
I learned a lot from this book as a teenager, and picked up a copy of the 1952 edition on eBay. 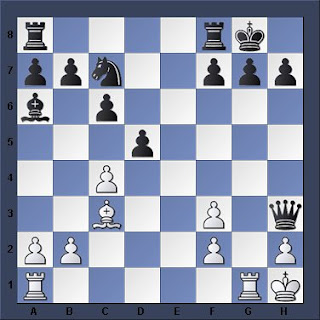 White to play and win
As a rule of thumb, it's not good to be down by a queen, knight, and pawn....

Posted by Bill Brock at 5:03 AM No comments: 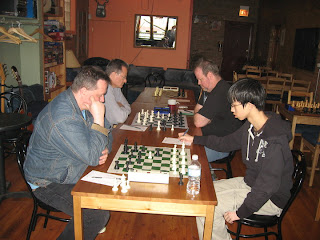 
The SSCC meets every Friday night from 7-10:30PM at the community center at 110th & Kilpatrick, Oak Lawn, IL. Open to all. Sponsored by the Oak Lawn Park District.

The SSCC has a Swiss event yesterday: my friend William Blackman won with a 3-0 score.
Posted by Bill Brock at 6:09 PM No comments:

Fire 1.2 (untested by me) is a very strong open-source chess engine.  I just learned of it a couple weeks ago, and had hesitated to post a link because the Rybka team has claimed that it's based on a reverse compile of Rybka.  Since then, however, I've seen no evidence supporting this claim, and know of no pending legal claims in any jurisdiction.  (If credible evidence is provided, I will promptly remove the following link.)  And I just heard GM Peter Svidler vouch for its strength on Chess FM.

It's free, and it's extremely strong.  You can download here.

Posted by Bill Brock at 4:52 PM No comments:

Email ThisBlogThis!Share to TwitterShare to FacebookShare to Pinterest
Labels: Fire 1.2

Topalov was in very good shape out of the opening (don't blame Yury Shulman!), but Anand simply outplayed him in a queenless middlegame.

Coverage at The Week in Chess, Chess Life Online, ChessBase (with extremely instructive notes by teenage GM Anish Giri), ChessPro (in Russian), Crestbook (GM Sergey Shipov, in Russian; I'm told his commentary is being translated here), Europe Echecs (in French), and ChessVibes (on site in Sofia). I've been following Peter Svidler's commentary on Chess FM, but an ICC membership is required for that.  And of course, you'll find high-quality gossip and occasionally NSFW trash-talking, as always, at The Daily Dirt.

Australian GM Ian Rogers, providing coverage for The Hindu in Anand's hometown of Chennai, has some post-mortem comments by the players.

You can see the game (accompanied by video and English-language commentary during play) at the official site.

Game 2 of the World Championship is underway right now: you can follow the action at The Week in Chess (delayed broadcast), ChessPro (live, but in Russian), or the official site.

Topalov is following a game of our own Yury Shulman from the 2008 U.S. Championship:

Posted by Bill Brock at 7:45 AM No comments: