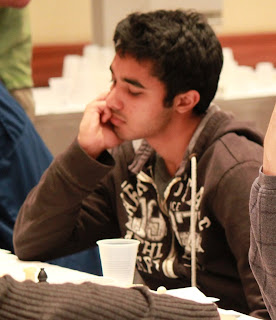 Crosstable here!  This was Adarsh's fifth and final norm for the Life Master title--congratulations!
Posted by Bill Brock at 8:29 AM No comments:

Story in WhyChess.
Posted by Bill Brock at 8:41 AM No comments: 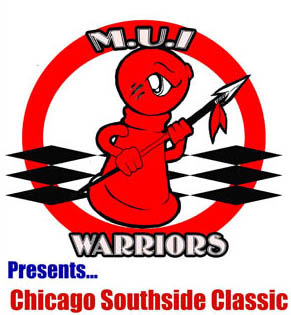 Check out Daaim Shabazz's website The Chess Drum for details on the Chicago Southside Classic, to be held at the world-famous Mosque Maryam (7351 S. Stony Island) on Saturday, August 27th!
Posted by Bill Brock at 5:45 AM No comments:

If you play either side of the Catalan, you should pay attention to this game!  The main line of the Open Catalan begins with 7.Qc2.  Black's reply 7...b5!? has been played before, but it's been considered an unimportant sideline.  In almost every previous game, Black met 8.a4 with 8...c6, with less-than-satisfactory results.

As Eric Rosen explained to me a couple weeks ago, Alexander Shabalov revived 7...b5!? against Sam Shankland in this year's U.S. Championship.  Shabalov's primary contribution seems to be the realization that after 8.a4, the critical move is 8...b4!

Dmitry is Eric's teacher, so I suspect the two of them have been working on this line together.  The engines tell me that in yesterday's game against six-time Dutch champion Loek Van Wely, Gurevich was better after 14 moves and simply winning after 16...Bf6!  Dmitry finished the game in style with a bishop sac and a rook sac. Impressive preparation and play against a super GM!