Parents will make sacrifices so their little ones can get ahead in life. So too bishops. With his killer shot on move 60, Angelo Young saved the Blaze from defeat. Well done!
Posted by Bill Brock at 3:18 PM 1 comment:

Trendsetter Gopal Menon plays the fashionable 4...Qb6!?  (I don't even know the name of this line: 2...Nc6 and 4...Qb6 is the Grivas Sicilian proper, and the Grivas is reached in the game by transposition.)

Black gets overambitious against White's hypermodern noodling-around and doesn't get enough for the sacrificed pawns.  But Florin sets a beautiful coffeehouse trap on move 32.  Black doesn't take the poisoned queen, but doesn't find one of the several clear winning lines, either, and Felecan is back in the game.

Posted by Bill Brock at 2:46 PM No comments:

First, belated congratulations to the Chicago Blaze for a fabulous regular season (8 wins, 1 loss, and Monday's tie against the Arizona Scorpions), and best of luck in the playoffs!  (About which more later.)

On Board 1, Mackenzie Molner played a Nimzoindian line that I've always found attractive in the abstract, but never understood well enough to risk in tournament play.  (Black's bishop appears to be trapped after 6...Ba5, but not really.)  Shulman plays for the center, eliminates the pesky Nc5, and creates weaknesses in the Black camp on e6 and c6.  But Molner defends well until a slip on move 39.

Find White's winning move in the diagram below!

Posted by Bill Brock at 2:15 PM No comments:

Details here.  Might be too late to grab a board, but it's not too late to hear Yury's lecture and kibitz!

Lecture is open to all. Spaces limited for simul, please RSVP to reserve space. You will be sent an email before the event telling you if you have a spot or if you are on the waiting list.

Priority given to active chess club members. Members of the public welcome.

Posted by Bill Brock at 1:04 PM No comments:

Another exercise from Jeff Coakley's Winning Chess Exercises For Kids. 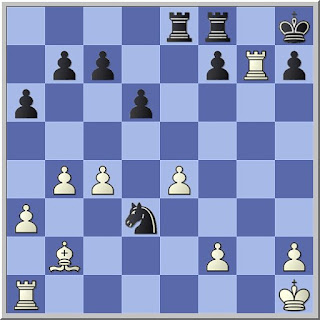 White to play and mate

Be honest: did you have to calculate the solution, or did you solve it instantly because you knew the mating pattern?  (But please don't ask the author of this blog entry to be honest.)
Posted by Bill Brock at 6:00 AM No comments:

Stealing yet again from Yakov Neistadt's Improve Your Chess Tactics (New in Chess, 2011).

Like Petrosian, Bent Larsen was best known as a positional player.  But he too was an outstanding tactician, and in his wonder year 1967, he didn't miss too many shots.

Black has some chances in the knight ending, but does he need to make the game last that long? 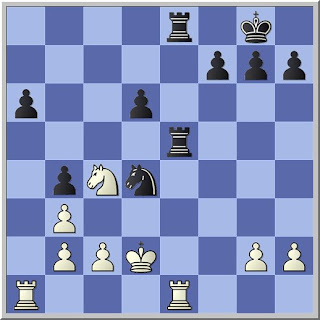 Westerinen-Larsen, Havana 1967
Black to play and win
Posted by Bill Brock at 3:57 AM 1 comment:

Irving Chernev, who wrote "Wonders and Curiosities of Chess," would have loved this. The following two games were both played at the U.S. Open, five years apart. The White players were brothers from Chicago named Albert and Angelo Sandrin, who both became Life Masters. In both games, White played exf7+, to which Black responded with ...Kh8. A few moves later, White captured Black's rook on f8 for free and with check, checked again with the capturing piece in order to vacate the f8 square, and then underpromoted his f-pawn to knight, checkmating Black. Commenter "Phony Benoni" (David Moody) at chessgames.com calls the games "definitely a case of sibling rivalry."

Albert's game is from the 1949 U.S. Open, which he won ahead of such luminaries as Larry Evans, Arthur Bisguier, and Anthony Santasiere.

Come join us this Sunday in Lombard...

...to honor Senior Master Andrew Karklins. We're at the same location (Buca di Beppo in Lombard, adjoining the Yorktown Shopping Center), at the same time (1 to 4 p.m.) Jim Brotsos will be our Master of Ceremonies.

If I told you the tactical theme, the solution would be too obvious....

Here's another position from Yakov Neistadt's Improve Your Chess Tactics (New in Chess, 2011). Former World Champion Tigran Petrosian is rumored to have been a more-than-adequate tactician. 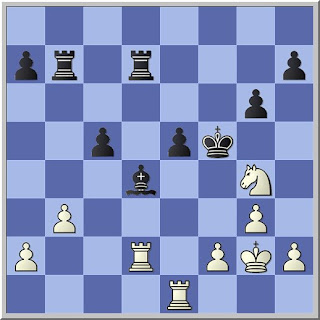 Have I mentioned that I love this book?

The book in question is Jeff Coakley's Winning Chess Exercises For Kids. 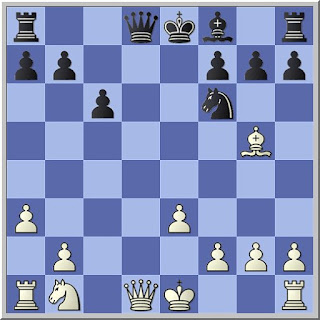 White to play: what's White's best move?
In real life, successful tactics don't always give you a won game, but only a slightly superior position.
Posted by Bill Brock at 11:33 PM 2 comments:

A trap in the Ruy Lopez, Alapin Defense

Semyon Alapin was a strong Russian master who originated a number of opening lines, such as the Alapin Opening (1.e4 e5 2.Ne2?!, intending to play a sort of King's Gambit Deferred with f4). The only one of much significance today is his line against the Sicilian, 1.e4 c5 2.c3, a solid line that has been played by many grandmasters and causes fits to higher-rated Black players because it's tough to beat. Among Alapin's lesser-known eponymous variations is Alapin's Defense to the Ruy Lopez. Quick, how many of you know what it is?

It's 1.e4 e5 2.Nf3 Nc6 3.Bb5 Bb4!?, a really stupid-looking move that does have the virtues of stopping an immediate d4 and preparing to play ...Nge7 without blocking in the bishop. Alapin did reasonably with it, including draws with Steinitz, Blackburne and Schlechter. It's only been played in 40 games in chessgames.com's 600,000-game database, only 25 of those in the last 30 years. That makes it an even rarer bird, by a factor of ten, than Bird's Defense to the Ruy Lopez (3...Nd4), seen in 502 games, 250 of them in the past 30 years.

For such an obscure line, Alapin's brainchild hasn't done badly, including a 22-move win in A. Ivanov-Lugo, U.S. Championship 2005 and a draw in Anand-Hector, Palma de Mallorca 1989.

Roberts writes that he has lost track of how many times he has been able to reach the position after move 10 in his games, and indeed how many of his opponents have repeated the entire game! Based on this trap and other games submitted by Mr. Roberts, Lane concludes that 3...Bb4 is a good try at club level. Check out Lane's article and give it a shot!
Posted by Frederick Rhine at 4:47 PM 1 comment:

Chess gig on the Intertubes

Cut and pasted from here:


Glenbard South High School has an opening for an Assistant Chess Sponsor for the remainder of the 2011-2012 school year.  This is a Schedule B Group VIII position (0.80 FTE).

Interested candidates should fill out an online application at www.glenbard87.org .

If you're a scholastic player, parent, teacher, or coach, you should really make a road trip to Peoria to play in this great Illinois Chess Association event or to cheer on your kids.  The event determines the Illinois champion for each grade from 1st through 8th.  There's also a high school section.

The Greater Peoria Chess Federation is organizing this year's event on November 5th at the Peoria Grand Hotel.  Two of the top players in the state, Nikhil Kumar Kunche and Timur Aliyev, will be giving simultaneous exhibitions for the students.  Registration closes at 6 a.m. on November 4th: don't disappoint the kids, do it now!

Email ThisBlogThis!Share to TwitterShare to FacebookShare to Pinterest
Labels: Top 200

A great deal of endgame wisdom condensed into one position

Jeff Coakley's Winning Chess Exercises For Kids  delivers a healthy dose of endgame wisdom along with the tactical exercises. 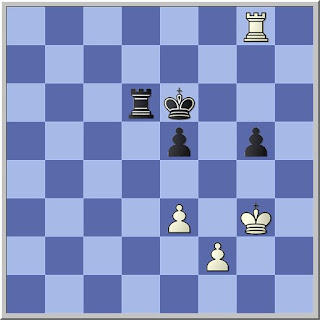 In the general case, are rook endings easy to win?
Posted by Bill Brock at 10:53 AM No comments:

Another title for Eric Rosen

Sevan Muradian just sent me an email: we have a new FIDE Master.

Eric scored a perfect 12-0 in Saturday's simul to publicize the return of the Illinois Chess Tour.  Having been paid appropriate hush money, we withhold the names of all victims.  Thanks to Mike Cardinale for organizing and for treating seven of us to a wonderful breakfast at Yolk (I hadn't seen Captain Streeter's statue before!), to the kind folks at Marbles for a very nice venue, for Grandmaster Dmitry Gurevich for stopping by to give Eric his good wishes, and to Eric for his volunteer service.

This was the first game to finish, if  only because a player with chess culture knows when to resign:


And here's the finale of the last game.  Black outplayed Eric in the middlegame.  A pawn up, our brave N.N. quite correctly turned down a perpetual check to press Eric for the win.  But it's hard to win a queen ending against a 2400, and no one has had more heartbreaking losses than Nomen Nescio:

P.S. Wow, what a boo-boo I made above! Pattern recognition is not the best substitute for thinking....
Posted by Bill Brock at 10:46 AM 3 comments:

This Saturday: Evanston Tri-Level (only $5!)

Levy Senior Center 300 Dodge Ave Evanston, IL 60202 Evanston Chess Presents: Tri-Level 4SS G/45 Three Sections USCF Dual Rated Nov 5, 2011 9:00am-5:00pm Section Gold: 1700 and over Section Silver: 1200 - 1699 Section Bronze: Under 1200 and Unrated 1600 - 1699 may play up to Gold. 1100 - 1199 may play up to Silver. Published USCF Regular Rating determins eligibility. Unrated players may be placed up at TD discretion. From time to time Evanston Chess pays one or more titled players to play in our events. We usually do not pair them against each other. Even if they should lose (it does happen) we may pair them with the highest score groups. Four rounds. Digital clocks are required and will be set to G/40 plus 5 seconds delay. Accelerated or decelerated pairings at TD discretion. Sections may be combined at TD discretion. Registration from 9:00 to 9:30 AM. Players must check in by 9:30 am; players who arrive late will receive a half-point bye for the first round. First Round 9:45 am, last round over roughly 5:00 pm. You may take one half-point bye in any round but the last. Entry fee is $5, please pay cash (no checks) at the door. Masters and Experts play free. Send name, USCF number, and telephone number to enter@evanstonchess.org. Junior players (under fourteen years) rated 900+ are welcome. Sorry, but we do not accept junior players rated under 900. Must be accompanied by a parent throughout the event. Bring clocks. -- Wheelchair accessible. No Smoking.

ChessVibes looks at the just-released official FIDE rankings. Hikaru Nakamura (#10) and Gata Kamsky (#19) are the top Americans. Teenager Fabiano Caruana (#23) represents Italy in international play, and also holds dual citizenship in the U.S.
Posted by Bill Brock at 10:00 AM No comments:

Another email cut and paste.  Looks like a very nice event!  For those of you who would prefer to simply play in the simul, that option is also available.

Posted by Bill Brock at 9:49 AM No comments: 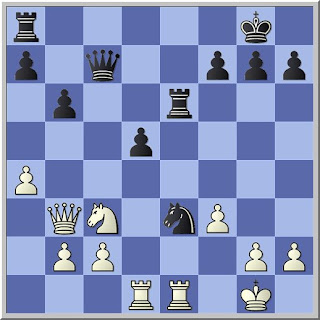 White to play and win material
Posted by Bill Brock at 11:42 PM 1 comment: