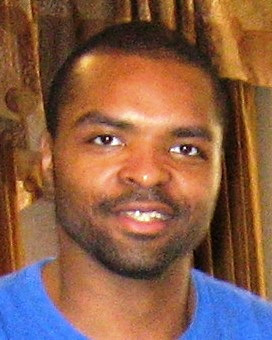 The Evanston Chess Club and the Illinois Chess Coaches Association (ICCA) are very pleased to announce the Isaac Braswell Memorial Prize. This new prize will recognize achievement in IHSA (Illinois) high school chess competition by an African American high school senior, and will be awarded in 2013.

Evanston Chess Club will hold a USCF-rated blitz tournament on Saturday, June 9, 2012, to raise funds for the Braswell Memorial Prize. All entry fees ($5 at the door) and free-will donations beyond the entry fee will go to the prize fund.  Registration for the tournament is from 9:00-9:30 a.m. and it will be held at the Levy Activity Center, 300 Dodge Ave., Evanston. For more information, click here. Those who cannot attend the tournament but would like to make a donation should contact Maret Thorpe.

The Braswell prize will be awarded to the African American high school senior with the highest IHSA chess rating following the IHSA State Chess Team Championship in February 2013. The winner will receive a cash prize, a plaque and recognition on the ICCA and Evanston Chess Club web sites.

Evanston Chess hopes to hold the tournament annually and continue funding the prize.

Isaac M. Braswell (1979-2012) was one of the strongest active African American chess players in the Chicago area. He reached a peak USCF rating of 2104 (expert level), in spite of poverty, disability and health challenges. Everyone who knew Isaac remembers what a friendly, funny, enthusiastic and kind person he was, even as he was a fierce competitor over-the-board. Isaac’s friendships crossed all lines of race, age, class and profession, and chess was one of many ways he connected with others. Isaac probably played chess everywhere in Chicago; he was a regular at Evanston Chess Club, and in February 2012 played for an Evanston Chess Team at the US Amateur Team-North championships. He also played in the Chicago Industrial Chess League.

Posted by Bill Brock at 1:16 PM No comments:

One thinks of the c6-d5-e6 triangle as an incredibly sturdy defensive formation for Black.  NM William Aramil simply goes around the triangle and mates Black's king in a miniature. Very cool, very impressive!

This win was worth $1,533.34 to William, who took a share of second in the Under 2300 section with an undefeated 5½/7   The loser, NM Kevin Wasikuk of Minnesota, was an even bigger winner: he had already clinched the $5,000 first prize in the section by winning his first six games.

Viswanathan Anand first won the unified World Championship in 2007: this is his third successful defense (Kramnik 2008, Topalov 2010, and now Gelfand 2012).  Understandably, Boris Gelfand's Chicago fans must be very disappointed, his childhood teachers Tamara Golovey and Leonid Bondar chief among them.  But Tamara can be very proud of her student's playing Anand on an absolutely level footing.

The third game of the playoffs was incredibly bizarre, even if one overlooks the tactic Gelfand missed on move 26.  Here's the rook ending:


The PGN has been cut and pasted from the official website, with Black's 51st move corrected
per Dennis Monokroussos (and confirmed by me from rewatching the video).  (Hmm: the official website appears to be wrong in another respect.  Ian Rogers includes a repetition of position on moves 55-57: see below.)  Black's 51st move was indeed the blunder 51...Kf5? and not the correct 51...Kf4!: had 51...Kf4 52.Rc8 been played, I can't imagine Anand missing the elementary intermezzo 52...Rc2+ 53.Kg1 Ke5.

It's amazing (and amazingly painful) to see a supergrandmaster blunder in this position: 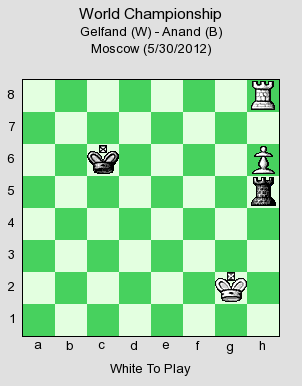 What in the world was Gelfand thinking when he played 61.59.Rh7??  (My best guess is that Gelfand was trying to prevent Anand from playing ...Kb7 and setting up the Vancura position with a subsequent ...Rg5+, ..Rg6, and ...Rc6.  But there's no time for this: White's king simply runs immediately to the h-pawn and relives the Rh8 of guard duty.  You can check this yourself with the Shredder endgame database.  And as long as White has the rook on h8 and is threatening to push the pawn to h7, Black's king can't come any closer than the c-file because of the beginner's skewer trick (explained by Matt Pullin here).

Of course, when one is playing on a ten-second increment, as Gelfand was, there isn't any time for "thinking."  What a painful way to toss away the win!  (Time pressure blunders in world championship matches are nothing new, of course; and the mutual blunders in this rapid game are not at all representative of the overall high level of play in this match.)

If world champions and their challengers can get confused in positions with only five or six pieces on the board, we should be more forgiving of our own errors.  (This past weekend, I managed to lose a queen for rook and pawn on the White side of a Catalan in only eleven moves: hmm.)

Gelfand had more time than I thought, and the hallucination was mutual.  GM Ian Rogers quotes Anand in discussing the above position:


Despite having built up almost a minute on the clock through four quick moves, Gelfand returns the favour. The obvious 61.Kg3-g4 wins, whereas the text move (i.e., 61.Rh8-h7)  is too slow by one tempo. “I thought I would get a Vancura position,” said Anand, “but I don't.”

Read Daaim's wonderful tribute on The Chess Drum.
Posted by Bill Brock at 2:04 PM No comments:

"The Hunch, the Pounce, and the Kill"

Who harpooned the London Whale?

Chess players mentioned in this New York Times article include NM Boaz Weinstein, David DeLucia (whose amazing chess library was featured in New in Chess a few years ago), and NM Peter Thiel.
Posted by Bill Brock at 5:46 PM No comments:


I am a Chicago native and played board 1 at CVS for Tom Fineberg. We won the city championship in my senior year in 1980 and prior to that won city in 1975 with Marvin Dandridge on board 1. I am still active, but now reside in Florida.


I received regrettable news from his daughter Marjorie that he has passed away on Sunday with his friends and family with him. I would like the Illinois chess community to know about this because he was considered a legend in Chicago. He did a lot of volunteer work after retiring from teaching.  He ran the Tuley Park chess club and hosted numerous venues there. He will be missed.

Tom was 89 years old when he died on May 27th.  I don't have a link to an obituary yet (though the death notice is already on USCF's In Passing).

It's hard to overstate Tom's importance to the Chicago and Illinois chess community: he and Maxine changed countless lives for the better.  More to follow....

The Open Section was won by Armenian GM Gabriel Sargissian, who finished undefeated with 7/9. A crucial 8th round win over GM Tamaz Gelashvili followed by a draw in the final round against GM Mesgen Amanov secured at least a share of first place. GMs Robert Hess and Milos Perunovic, the only other people capable of sharing the spoils, were unable to beat GMs Yury Shulman and Michael Adams respectively, leaving Sargissian all alone at the top.

IM Daniel Ludwig finished in joint 2nd-8th with 6½/9, scoring a GM norm, as well as taking the top U2500 prize, while FM Kayden Troff finished with 5/9, scoring an IM norm.

Final standings, with prizes, are now posted for all sections.

Congratulations to Gabriel Sargissian: the Armenian grandmaster also won the Open in 2009.

On the local front, a great comeback for Mesgen Amanov, who was upset in round 1, but then scored five wins and three draws against a field that included five GMs and one IM.  Nikola Mitkov also shared second place with a last-round win against GM Mikheil Kekelidze.

Games and reports to follow!
Posted by Bill Brock at 10:39 AM No comments:

Game of the tournament

When two geniuses with a reputation for disdaining opening theory finally get around to playing an Open Sicilian, this is what happens.   Michael was effusive in his praise of Jon's play: both winner and loser had a lot of fun!