Two games are known: can you find more?

Permalink here. (pdf)
Posted by Bill Brock at 9:47 AM No comments:

(Not) Winning a Won Game

Here's another game from last month's ICA Girls' Invitational Championship at the North Shore Chess Center.  I hope that both Adele and Miranda will forgive me for publishing a game in which they made 51 good moves and only one bad one.  But I found this game so instructive because it's so typical.

The stylish way to win a game is by direct attack against the enemy king.  In real life, we don't get to be stylish as often as we'd like.  So we win a piece instead.  When we talk about "winning a piece" in chess, we mean winning a bishop or a knight, worth about three pawns.  In this game,  Miranda wins a piece for a pawn: in quiet middlegame positions, this advantage is usually sufficient for a win.

When you win a piece for a pawn, what's the easiest way to win?  Well, you'd like to use your extra material to queen a pawn and then checkmate with overwhelming force.

But put yourself in your worthy opponent's shoes.  You may be winning, but you have one less pawn than she does.  So if the defender could keep trading one of her pawns for one of your pawns until there was only one pawn left, that extra pawn would be hers.  True, you would still be up a piece, but you'd have to look for a way to checkmate without making a queen.  That's much harder!  (Rule of thumb: in pawnless endings, one often has to be up by five "points" to win.)

DEFENDERS WANT TO TRADE PAWNS, NOT PIECES.  (Here, we use "pieces" in a second sense: kings, queens, rooks, bishops, and knights, but not pawns.  Yes, I know we can't trade kings.  And yes, we usually talk about chess sets having thirty-two pieces, not sixteen pieces and sixteen pawns: this third meaning of "piece" is actually the most common one.)

THE SUPERIOR SIDE WANTS TO TRADE PIECES, NOT PAWNS.  Every pawn is a potential queen.  Guard your potential queens just as you do the one that's already on the board!

Miranda chooses a Meran Variation setup. As White's bishop is not that active on d2, Black should get nice play. 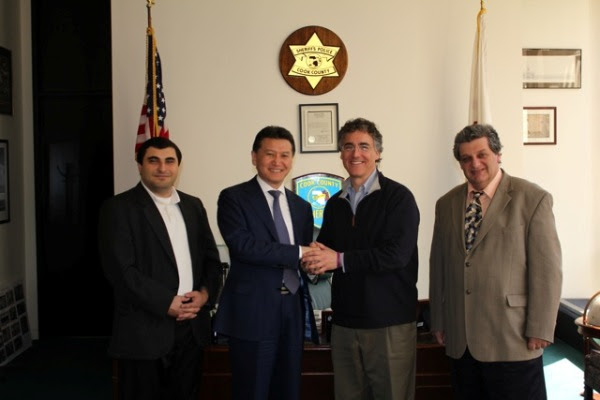 Check out this story currently featured on FIDE's home page. The U.S. Secret Service (we know how diligent and task-oriented these fellows are) did let Kirsan meet former Presidents Clinton and Carter. So perhaps I shouldn't be so uptight....

And I don't want Chicago to get a reputation as an ungracious host.  It's important to talk to people with whom we don't agree. Some of them will be in town next month for the NATO summit.

Having said that, I can only reiterate my earlier post.

Both Sevan and Mikhail are friends of mine, so I feel rather awkward posting this.  I would feel even more awkward if I were silent.

Posted by Bill Brock at 5:54 PM No comments:

Posted by Bill Brock at 6:54 PM No comments:

Evanston Chess $5 Swiss on May 5th

Posted by Bill Brock at 5:15 PM No comments:

"At Chicago chess tournament, girls rule the board"

Nice coverage in this weekend's Trib.

Caeley Harihara (photo above) was playing on the top board in final round of the 16 & Under Section.  She lost to 16U winner Lilia Poteat of New York, and finished tied for third with 4-2.

Anjali Toly tied for second in the 12 & Under section, finished 5-1, and gained a bucket of ELO.

Shreya Managalm (already 1397!) "only" scored 4½-1½ in the 8 & Under Section: Shreya won her first four games, drew the second-place finisher in round 5, and lost to Maggie Ni of Texas in round 6.

Crosstables here.  The KCF All-Girls National Championship (organized by the Kasparov Chess Foundation and Renaissance Knights) drew 230 players in six sections.  And the event will return to Chicago next year!
Posted by Bill Brock at 2:29 PM No comments:

If you want to learn to Tango, check out Benjamin's articles here and here.

Posted by Frederick Rhine at 1:01 PM No comments: