Posted by Frederick Rhine at 11:37 PM No comments:

22 Grandmasters at the Chicago Open!

I can't recall Michael Adams having played in Chicago before.

Check out the action in Wheeling.  Better yet, come out and play this weekend!
Posted by Bill Brock at 10:45 AM No comments:

Hyde Park chess players, unite!  What good is urban redevelopment that doesn't include space for play?  The chess tables have been gone for eight years.
Posted by Bill Brock at 2:16 PM No comments:

Just got an email from Continental Chess updating information regarding this weekend's Chicago Open:

More information on the CCA website.   See you there!
Posted by Bill Brock at 11:57 AM No comments:

The famous GM and author was the longtime chess columnist for the Washington Post. He's now at The Huffington Post.

His first column is a very nice overview of the U.S. Championship.  One hopes he won't be writing about the dangers of vaccination!
Posted by Bill Brock at 10:13 AM No comments:

You won't see many GMs playing it, but both on the Internet and over the board a lot of players play a sort of closed Sicilian with Nc3, Bc4, Nf3, 0-0, d3, etc. Many years ago I discovered an opening trap with which I have caught literally dozens of players over the years. These include a high expert and two A-players in serious OTB games. The trap is little known and rarely published, although it is in Karsten Mueller and Rainer Knaak's excellent CD-ROM 1000 Chess Opening Traps, which ChessBase issued a few years ago. On ChessGames.com (which has over 500,000 games), I found only a game in which White fell into the trap, but Black overlooked the winning move! Instead of 7...b6?, do you see what Black should play?

Here is an opening trap with which I have caught more than one opponent in Internet blitz games. White's sixth move is very plausible (correct is 6.Qe2+! Be7 7.Nd5 with approximate equality), but loses a piece.

Posted by Frederick Rhine at 9:33 PM No comments:

Yury Shulman found a nice tactic with 34.Rc5! and won a pawn with excellent chances to convert, but lost the thread of the game in a time scramble. Congratulations to Gata!

Black has draw odds.  The players bid for choice of color by giving up minutes: the low bidder gets choice of color (Black, I'd assume!) and the reduced minutes.  White gets 60 minutes.

This seems weird to me: another way to do it would be to have one player (chosen by coin toss) choose the reduced time for Black, then have the other player pick the color.

Posted by Bill Brock at 7:05 AM No comments:

It's a fun game: you may want to hit the pause button and think when the tactics start....
Posted by Bill Brock at 8:06 PM No comments:

Those of you who are U.S. Chess Federation members already know that you can access your updated rating via the Member Services Area.   For example, here's my rating history and a graph of my ups and downs.  If you're a rated member, you have one of these, too !  (Please don't look at my tournament history: too many embarrassing results lately!)

And here's my current rating.  But note the new line added to this report: "Highest Norms-Based Title Earned."  What the heck is this?

USCF is awarding new titles based on your peak performances.  To earn (say) a 2nd Category (Class B) norm, you have to score more than 1 game point better than a 1600 would expect to score in a tournament.  Not easy!  But not impossible, either.

To get the title, you need to earn five norms!  That might take several years, but again, it's doable.

The system isn't perfect: I've been playing tournament chess since 1967, I've been rated over 2000 (with brief dips below) since 1981.  However, the MSA norm calculation only goes back to 1991.  We old-timers can deal with this, but this is a great way for youngsters to measure their progress.  (Forget your bad events; strive to have more peak results!)

The "more" tab includes the "milestones report" that displays norm titles earned, as well as a link to a report on norms in progress.  If you're only one norm away from earning a title, you need to be playing this weekend!

Thanks to Mike Nolan and the USCF Ratings Committee for a fabulous job!
Posted by Bill Brock at 7:48 PM 3 comments:

Shulman sacked a pawn and burned tons of time; Kamsky was still comfortably in his Grünfeld preparation. White's sharp attack fizzles out into a rook ending. More to follow!

Posted by Bill Brock at 4:29 PM No comments:

Enter today! Of course you can enter at the door, but you'll save $27 and a long wait in line later this week.

The Chicago Open is at the Westin North Shore in Northbrook: choose between two-day, three-day, or four-day sections if you're under 2100, or the five-day Open section for strong players and masochists under 2100 (like me).

Details are here!  The 2-day Under 1000 section is ideal for those new to tournament chess.
Posted by Bill Brock at 11:37 AM No comments:

It's Shulman-Kamsky tomorrow for the title!

Posted by Bill Brock at 7:49 PM No comments: 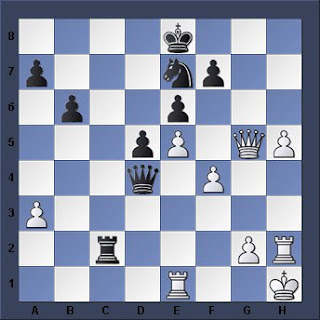 
Do these easy mating patterns have any practical application in grandmaster play?  Well, it helps to be able to spot the pattern many moves in advance.

Here's a somewhat more difficult version of the same problem. 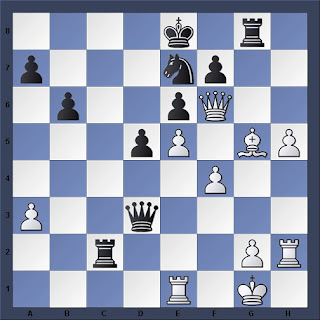 Follow the action at the live site!
Posted by Bill Brock at 2:06 PM No comments:

This is the first year in a long long time that Chicago's Fred Gruenberg won't be running the show, but ex-Chicagoan Al Losoff will be carrying on the tradition.  Local GMs Dmitry Gurevich and Mesgen Amanov will be among the masters giving workshops and holding simuls; GM Susan Polgar, GM Varuzhan Akobian, and IM Irina Krush and several other top players will also be there.  (GM Arthur Bisguier, a really sweet fellow who's forgotten more about rook endings than the other players know, will be there, too.)

I hate Las Vegas; I love this tournament!  The venue is South Point; I don't know whether the $50 room rates are still available, but it couldn't hurt to ask.
Posted by Bill Brock at 11:58 AM No comments: