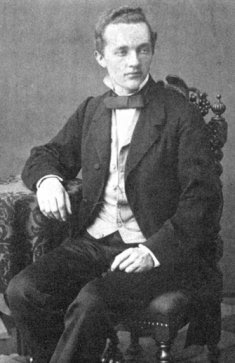 After Paul Morphy's retirement from active play in the early 1860s, Louis Paulsen may have been the strongest chess player in the world.  He emigrated from Germany in 1854 and lived in Dubuque, Iowa, until 1860, after which he returned to Europe.  Most chess players remember him for his famous games with Morphy from the First American Chess Congress, his contributions to the Sicilian Defense, and his proto-hypermodern playing style.

I never knew how strong a blindfold player he was until reading Olimpiu G. Urcan's Chess Cafe article on Paulsen's blindfold exhibitions.  In May 1858, Paulsen scored 9 wins, 0 losses, and 1 draw in a ten-game Chicago exhibition; later than month in Rock Island, Paulsen scored a perfect 10-0-0.  You'll find several of those games in Urcan's article.

Amateur historians may wish to help Urcan in filling the gaps of Paulsen's exhibition record.  And while you're at it (plants tongue in cheek), can you find any evidence that a certain avid amateur chess player from Galena (only a few miles from Dubuque) ever played Paulsen, and thus gained strategic insights put to use in winning the Civil War?  (One might argue that Gen. Grant's style was closer to Morphy's.)
Posted by Bill Brock at 2:55 PM No comments:

Mike will receive a lifetime achievement award from the U.S. Chess Federation in Orlando this weekend.  Unfortunately, he won't be there, as his wife Betty is recovering from a broken leg.  As is typical for Mike, he's more interested in the future than in personal honors.  Here's a letter he wrote this week.


USCF Scholastic Chess Committee and interested scholastic chess individuals:
There is a plan under discussion between the Illinois Chess Association (ICA) and the Chicago Public Schools. This plan has been in development for several years and progress followed by, and contributed to, by officers of the ICA and members of the Illinois scholastic chess community. Scholastic chess in Illinois has been on a rise in Illinois for a number of years thanks to individuals whose volunteer efforts do not end as their children age, high school programs, and several companies providing chess instruction for pay. As a result, scholastic chess in Illinois has developed on a sustained basis in areas such as Rockford, Bloomington-Peoria area, northern Chicago suburbs, western Chicago suburbs, and, to a lesser extent, the southern Chicago suburbs (eastern Chicago is Lake Michigan). Thanks to some companies and the efforts of a few individuals in Chicago elementary and high schools there is some scholastic chess active in Chicago. Thanks to the companies (I know of three) chess at the elementary level has been on the rise even while chess at the secondary level has been waning. The recent growth of elementary chess in Chicago shows the potential for exponential growth if only a structure capable of managing it and (most important) providing a sufficient number of individuals to instruct and sponsor the students existed. The Chicago Public School system has such resources to enable the scale of growth other parts of the state have had.
The proposal being shown to the USCF that the ICA is developing with Chicago officials will provide the chess expertise to an interested bureaucracy to develop scholastic chess in Chicago to an unprecedented level. The ICA has offered to provide an instructional foundation that can sustain itself. As part of the plan, the ICA will help raise the funds needed for the initial training that will jump start the program. Once operational the program can become self sustaining within the Chicago system. Part of the beauty of the program is that it does not replace existing individual or company endeavors. Rather the ICA/Chicago plan will not only supplement and complement it, but will make much more in demand for the services of existing companies.
Developed through the input of numerous, highly experienced scholastic organizers, the plan has been endorsed (and/or sponsored) by Illinois’ top rated players, many of the private [z]one chess providers operating in Chicago, the Illinois Elementary School Association, the Illinois Chess Coaches Association, the Chicago Public Schools’ Chess Association, the U.S. Chess Trust, and the Youth Chess Foundation of Chess. Not developed in a vacuum, the plan is based on the successful programs in Philadelphia, New York, and other cities tailored to fit Chicago. The potential for gain to chess and to the USCF commands that the USCF support the plan with input and endorsement.
Yours in chess,
Michael E. Zacate

Posted by Bill Brock at 7:57 AM No comments:

There are two rook plus pawn vs. rook positions that every player should understand: the Philidor position and the Lucena position.

You will sometimes get positions very close to either the Philidor or the Lucena: in many (most?) cases, your job is to try to convert to the Philidor (as defender) or Lucena (as attacker).

In round one of the U.S. Open, Sevan Muradian handled the ending much better than his young opponent, but made one slip that could have thrown away the upset win. Very nice game!

Posted by Bill Brock at 3:42 PM No comments:

It's August 2nd, and I haven't been to the Chess Pavilion yet this summer.
Posted by Bill Brock at 8:24 PM 3 comments:

Barbara Radner, the director of the Center for Urban Education at DePaul's School for New Learning, runs a summer enrichment program at Dumas Technology Academy, 6650 S. Ellis.  This past Friday, Barbara, Gary Childers, and the other wonderful teachers in this program (my apologies for not having all your names!), invited Jerry Neugarten and me (on behalf of the Illinois Chess Association) to help run the program's chess championship.  It was a wonderful day: Jerry and I had a lot of fun, and the love these young players have for the game is palpable.

These pictures were taken at the end of a round: the crowd was much larger! 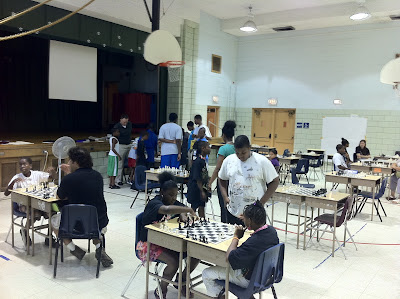 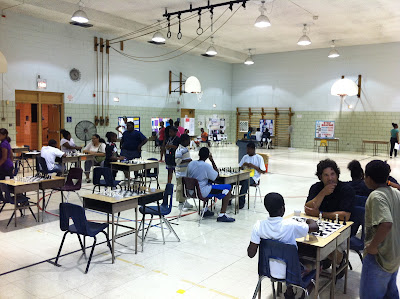 Congratulations to all who played! 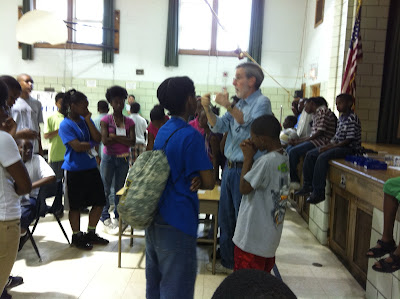 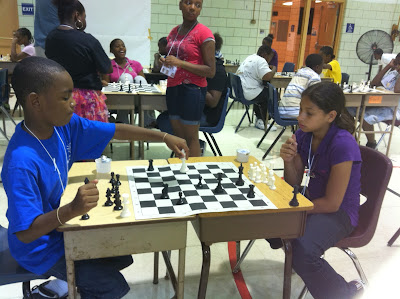 The end is near.... (courtesy Barbara Radner)
Posted by Bill Brock at 4:13 PM No comments:

Trevor Magness at the Denker

The Illinois representative is one of the early leaders at the Denker Tournament of High School Champions in Orlando.

In today's game, Trevor finds a nice shot in the hyper-theoretical Romanishin Variation of the Nimzoindian.

Posted by Bill Brock at 3:21 PM No comments:

Noodling around with the laptop

I was reading Kasparov's classic My Great Predecessors, Part 2

this afternoon (with Houdini running in the background). Houdini discovered a very cool variation that Kasparov doesn't mention, which suggests that White may have had more than one way to draw. 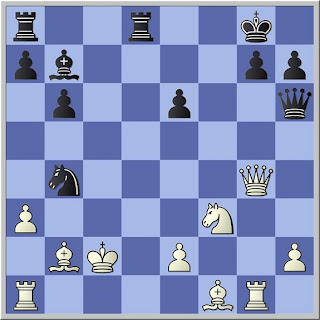 
Amazingly, the position after White's 19th move was home preparation by Botvinnik! This would be impressive in the computer age, let alone 1930.

P.S.  Fritz 6 also finds this same line easily, which makes me think that this is an editorial snafu.
Posted by Bill Brock at 2:24 PM No comments:

Enjoyable video.
Posted by Bill Brock at 12:05 AM No comments: