As long as I've got ChessBase open and we're remembering the Chicago players we lost last year....

This game gives one a hint of how strong Arnulfo Benesa was in his prime. His "quiet" positional play was backed by sharp calculation: one would expect this from a virtuoso of the Grünfeld and the Najdorf! Out of nowhere, Black's queen is trapped.

Parenthetically, the loser of this game, NM Noureddine Ziane, is alive and well. Sometime after this game was played, Noureddine transferred from Shimer College to the University of Texas at Dallas. While in Dallas he founded USA Chess with Katie Stone. Look for him in Tangiers or Las Vegas!

Posted by Bill Brock at 7:00 PM No comments:

From the 2002 Chess Olympiad

Ricardo Szmetan represented Barbados in the 2002 Olympiad.  I don't know whether he was related to Jorge Szmetan (born 1950), who drew Bobby Fischer in 1971 and who represented Argentina in several Olympiads.

I did not have the pleasure of knowing Ricardo, but many of my friends knew him well.


For those of you that may have known him, I just learned that Dr. Ricardo Szmetan, originally from Barbados, passed away on December 31, 2010.

Ricardo had a PhD in Latin American Studies and recently completed a MS in Library Sciences at University of Illinois Champaign-Urbana. He was also a FIDE Master. 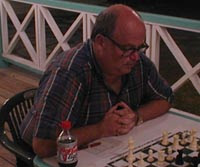 While Szmetan was indeed the 2002 national champion of Barbados, he was of Argentinian descent (not sure where he was born--were his parents part of the Central European Jewish diaspora?).  His Midwest tournament victories included the 2008 Greater Peoria Open and the 2007 David Mote Memorial, and he played in numerous master-level events in Chicago over the decades.
Posted by Bill Brock at 6:42 PM 1 comment:

More info at the ICA website!  Tim Just and Glenn Panner are organizing, so you know it'll be a quality event.
Posted by Bill Brock at 4:12 PM No comments:

(continued from previous post)
In Round 4, Tim Ailes and I reached a typical Benko Gambit position. 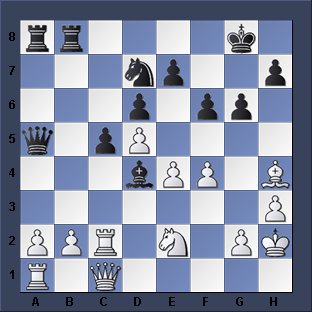 Bill Brock-Tim Ailes
Black to play after 21.Ne2
As usual, all Black's pieces are pressing (or, in the case of the Nd7, about to press) the a- and b-pawns.  Black has to decide how to handle the threat of Nxd4.  Doesn't 21...Rb4 look natural? 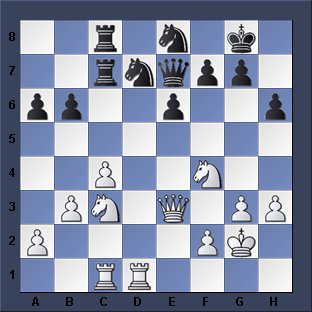 Bill Brock-Aun Thant Zin
After 27.Qe3
Doubtless encouraged by my toothless opening, Black played 27...Qb4.  How would you respond?  (And how do you think I responded?  There's more than one good move here: I saw a "hard" one and overlooked an "easy" one that my good-natured opponent pointed out to me immediately after the game.)
I'm not trying to embarrass my creative opponents (who, aside from these lapses, played extremely well) or flagellate myself for our collective blunders.  What can we do to blunder less often?
Answers later!
Posted by Bill Brock at 11:20 PM 2 comments:

Critical moments, or, Why do smart players make foolish choices? (Part I)

The words "criticism" and "crisis" share an etymology.  Sometimes we recognize a critical moment in our games.  Having watched reruns of House, we may be able to make a differential diagnosis.  Being human, our reasonable guess may not be right, as we discover in the post-mortem.


I haven't really begun to analyze my games from this weekend's Tim Just's Winter Open XXV, but I think this may be an example: 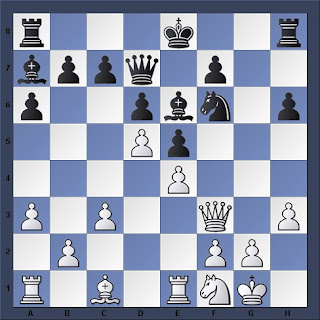 Charles Swan-Bill Brock
After 16.Qxf3: Black to move
I have to choose how to give my extra piece back.  I played 16...Bxh3, but I now suspect (despite my engine's initial enthusiasm) that it's a mistake to cede the f5 square to the White Nf1.  My guess (which may well be wrong!) is that 16...Qe7 17.dxe6 fxe6, covering my light square weaknesses and creating a second semi-open file for my rooks, would've been stronger.  But either choice is reasonable: even Dr. House's initial diagnosis is usually wrong.
But sometimes the crisis is self-inflicted.  I found it humbling to try to explain my mental lapse a few moves later (my second senseless blunder of the week!) 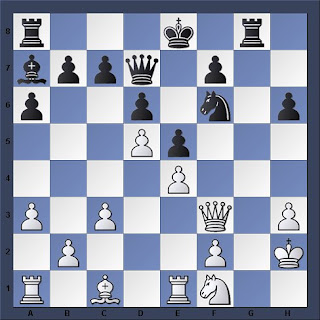 Charles Swan-Bill Brock
After 18.Kh2: Black to move
I analyzed the piece sacrifice 18...O-O-O 19.Qxf6 Bxf2, hitting both the hanging Re1 and the g1 square.  If one peers deep into the position ;-) , one might notice a refutation.  (I did manage to generate some cheapo potential in the game continuation, but Swan put me away very calmly and efficiently.  His other games, including his loss to Aliyev, were even more impressive.)

It was a consolation that other strong players could make equally strange oversights. 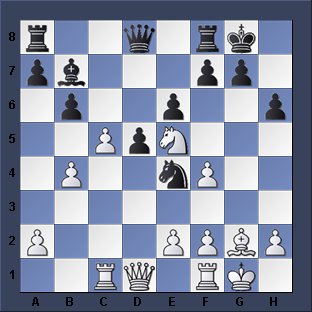 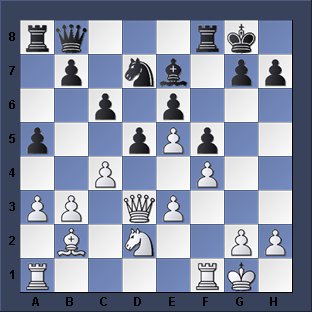 Dmitry Sergatskov-Bill Brock
White to move after 14...f7-f5
Dmitry's 15.e4 seeks to take advantage of the loose knight on d7.  However....

Andi Rosen reports on her hard work at the Illinois Chess Association website.

In the course of skimming Andi's report (I do actually work for a living), I noticed an embarrassing omission from my Tim Just's Winter Open XXV report below.  The winner of the Booster Section, David Peng, was only 7 years old in December 2010! 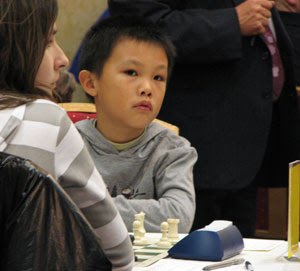 The consensus this weekend is that this was not the 25th annual TJWO.  Wayne Clark thought it was the 27th; Chief TD Daniel Parmet said that it had been run as early as 1983, which (assuming no skips) would make it the 29th.  I remember when it was held at Illinois Beach State Park: great location if you don't get a blizzard!

Eric Rosen won comfortably with 4½-½.  Timur Aliyev, Under 2000 winner Charles Swan of Whitney Young, and Under 2200 winner Bill Brock tied for second with 4-1 each.  Swan picked up 120 rating points in one weekend: not bad!  Congratulations to Fredric Cohen for making Class A!
David Peng won the booster with 4½-½.  Roger Wang, Saagar Gupta, Avinash Rajendra, and Ryan Toepfer (who went from 1481 to 1647!) tied for second with 4-1.

Thanks to Tim Just, Wayne Clark, and Daniel Parmet for another very nice event.  The clocks provided by the North American Chess Association allowed the event to use the thirty-second increment setting.  Even with only 90 minutes each for the game, one can approximate Real Chess.  Very pleasant for us old folks!
Crosstable here!
Posted by Bill Brock at 6:16 AM 1 comment:

She's featured in Nicholas Kristof's column.  It's much better than the rest of today's depressing news.

I'm playing chess this weekend; back to blogging soon!
Posted by Bill Brock at 12:27 AM No comments: