Tiny Armenia is a big player in world chess, and a new gambit could make it even bigger: mandatory chess in school.

The click-clack of chess pieces is being heard around the former Soviet nation's primary schools this fall, as the game becomes part of the curriculum along with such standards as math and history for children between the ages of 7 and 9 [....]

Wendi Fischer, executive director of the United States' Foundation for Chess [sic], has campaigned for the game to be taken up in U.S. classrooms and says Armenia's program has big potential.

"By incorporating chess as part of the curriculum, you are including a game, and that's how kids see it," Fischer said. "They think they're focused on fun. So I think it is a great way to cross over between a true hardcore curriculum that's mandatory and the young children being able to play and explore and have fun.":

Posted by Bill Brock at 1:49 PM No comments:

Last night at the North Shore Chess Center, Dmitry Gurevich and Josh Friedel powered the Chicago Blaze to a 2½-1½ win over the L.A. Vibe.  On to the U.S. Chess League finals!

Must work: games here!
Posted by Bill Brock at 11:55 AM No comments:

Shulman annotates another USCL Game of the Week

Check it out on the Blaze blog!
Posted by Bill Brock at 8:15 PM No comments:

I saw many Chicago players this weekend at the Kings Island Open in Mason, Ohio: the top section included GM Dmitry Gurevich, FM Andrew Karklins, and FM Aleksandar Stamnov, and Wayne Clark was one of the directors.  The top Illinois finisher, FM Igor Tsyganov, scored an undefeated 3½-1½ and drew GM Alexander Shabalov.  Kentucky lion Gregory Kaidanov took top honors in the Open Section with a perfect 5-0.

Vanity p.s.: I won the $678 "second-best fish" prize when the congenial NM Owechuku Iwu (who'd previously beaten me four games in a row) once again outplayed me as he normally does, but then went wrong in a tricky bishop vs. knight ending.  But is there any other kind? 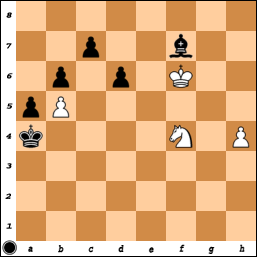 The problems that knights have in stopping rook pawns from queening are legendary.  But sometimes bishops have issues coping with rook pawns, too, especially when they're supported by a friendly king and knight.  (I learned this lesson the hard way from Jiri Marek at the 2002 Illinois Open.)

Normally, play on both sides of the board favors the player with the bishop, and Black is up two pawns to boot.  But it seems that White is not worse here!  Dr. Iwu went into a 45-minute think, then played 1...Kb3?  2.Kxf7 h4 3.Nd3, and White soon won.  What would you have done?  Some reasonable-looking moves appear to lose, and I suspect that two strange-looking moves draw.

Crosstables here!
Posted by Bill Brock at 2:24 PM No comments:

"Masters of the Game and Leaders by Example"

Fewer than 2 percent of the 47,000 members of the United States Chess Federation are masters — and just 13 of them are under the age of 14.


Among that select group of prodigies are three black players from the New York City area — Justus Williams, Joshua Colas and James Black Jr. — who each became masters before their 13th birthdays.

Check out this great story in The New York Times.

And let's work together to create some competition for the New Yorkers.
Posted by Bill Brock at 1:20 PM 1 comment: