For the uninitiated, Kaushansky was Chicago's top player for at least one year in the pre-Gurevich 1980s.  He, Dmitry, and Albert Chow were among the co-champions of the 1994 U.S. Open in Chicago.
Posted by Bill Brock at 10:45 PM No comments:

As long as we're posting articles from NY papers....

Here's my challenge to Rahm: why can't we turn out greater champions in Chicago?

P.S. You can also watch the WNYC interview with James Black:

Today's New York Times reports that two 17-year-old handball champions were disqualified from the Public Schools Athletic League handball championship "because they had entered a tournament that awarded cash prizes, which is against league rules."

In chess, as in handball, one becomes a better player by facing stronger opponents. I don't like teenagers playing games for money. But I think the definition of "amateur" needs to be re-examined by the Illinois High School Association and Chicago Public Schools. Merely competing against non-amateurs should not jeopardize one's amateur status. In my opinion, it's reasonable to ban students from accepting prizes.

Organizers can help (and possibly help their profit margins) by offering amateur entry fees to their events. If a high school kid can't accept a $5,000 prize, then why should that kid have to pay $200+ to enter the event?
Posted by Bill Brock at 12:59 PM No comments:

I just uploaded my third video on opening traps to YouTube. To find all my videos (three so far) search for "Chicago Chess Blog."
Posted by Frederick Rhine at 8:56 PM No comments: 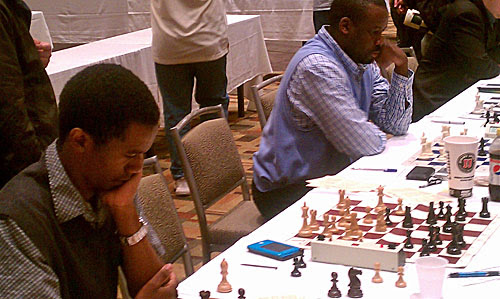 A cute minature from yesterday 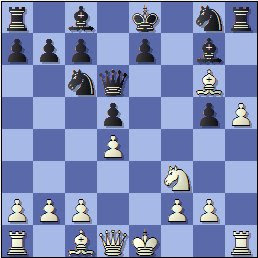 Vanity combination (relegated to the notes)

So what was I thinking yesterday when I played 18...Ng4!? in the position below?  Yes, taking on f2 with check is threatened, but there is no mate, and it seems that White could play 19.dxc6 "for free." Don't let Rybka decide for you: use your noggin. Post the critical variation(s) in the comments.

In the post-mortem, my genial opponent (a NM from Virginia) and I suspected that the move was possibly not the best, but definitely the most fun to play in the last round. 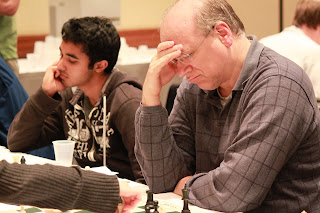 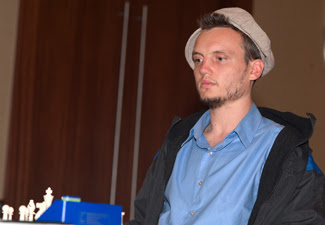 Photo: Betsy Dynako
So does the Chicago Open winner prefer the English transliteration "Gareev" (per Wikipedia, which is never wrong, and by analogy with Russian supergrandmaster Bareev) or Gareyev (per USCF)?  Nice article by Jamaal Abdul-Alim at Chess Life Online with several key games.
And here's a photo gallery by Betsy Dynako, and a mid-tournament story featuring GM Pentala Harikrishna.
Last but not least, USCF's Member Services Area has already rated the event: kudos to them!
Posted by Bill Brock at 2:26 PM No comments:

The club itself meets every Tuesday (but not tonight): more info at the club's blog.
Posted by Bill Brock at 11:43 AM No comments:

Not strictly Chicagoland, but not that far: looks like a congenial place to play!

The club's next USCF event is June 25: details here.
Posted by Bill Brock at 11:37 AM No comments:

Congratulations to Uzbek/Texan Grandmaster Timur Gareev, who won the $10,200 first prize in the 2011 Chicago Open with a very impressive 7½-1½ score.

GMs Pentala Harikrishna of India, Robert Hess of New York, and Alejandro Ramirez of Texas tied for second with 7 points.  GM Mesgen Amanov was tops among the four local grandmasters with 6½ points.

You can find results and prizewinners for all sections here: much more to follow!
Posted by Bill Brock at 9:19 AM No comments: