Actually, IM Enrico Sevillano doesn't live in Chicago any more. But he used to live around the corner from me (we once met in the laundromat). Even though NM Ken Wallach gets into trouble early, he shows why he's a master by offering stubborn defense in an unattractive position.

The following game appears in the chapter "Perfect Games" in Fred Reinfeld and Irving Chernev's classic The Fireside Book of Chess. Reinfeld and Chernev observe, "In the opinion of the writers, Parr's masterpiece has well-founded claims to being considered the finest attacking game of all time." A lot of great games have been played in the five decades since their book was published, but the game remains an incandescent brilliancy. The winner, Frank Parr (1918-2003), won the famous Hastings Premier tournament in 1938-39, the one occasion on which he played in it.

Missed by the Masters

The game score below is taken from the tournament book and ChessGames.com. The players, whose names I have omitted to avoid embarrassing them, were prominent local masters. In the diagrammed position, Black played 8...a6. Do you see anything better?

Posted by Frederick Rhine at 1:49 AM 4 comments:

Game/30 event at A Place for Us

It's co-sponsored by the Midway Chess Club and the South Suburban Chess Club.  Details here!

Posted by Bill Brock at 7:38 AM No comments:

Email ThisBlogThis!Share to TwitterShare to FacebookShare to Pinterest
Labels: A Place for Us, Midway Chess Club, South Suburban Chess Club of Greater Chicago

The second half of the 26th North American Masters begins tonight!  Details here.
I'll be playing in a concurrent invitational event at the same site (the Holiday Inn on Touhy in Skokie), the MCA FIDE Futurity XI
Posted by Bill Brock at 7:31 AM No comments:

This position from the Chicago Open is still haunting me! 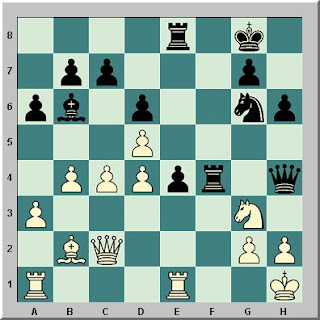 Time to put on your thinking cap!

In the game, young Mr. Karklins could have played 23.c5 with some advantage: my bishop on b6 is shut out of play.  Instead, he blundered with 23.Re3?  I'm pretty sure that my reply, 23...Ne5! gives Black a nice advantage, but the complications after 24.Nxe4!? are rather amazing. 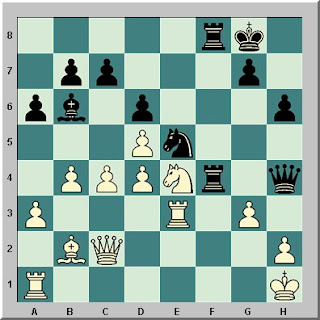 If you find a good move, look for a better one!
Posted by Bill Brock at 6:38 PM No comments:

Break On Through to the Other Side 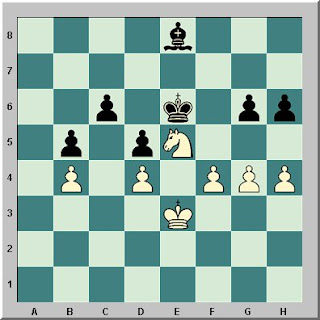 The move is obvious once you see it!  Lu Shanglei shows us how; Karsten Müller annotates for ChessBase.
Posted by Bill Brock at 6:10 PM No comments:

Details here! You'll see many familiar faces from Chicago there.

Even at the last minute, rooms and airfare should be reasonable.  You can fly in Thursday night and have three days of serious chess (and perhaps a little recreation, too).
Posted by Bill Brock at 4:24 PM No comments:

$5 Swiss in Evanston this Saturday!

(I was temporarily confused abut the date, so please allow me to repeat...)

ICA President Tom Sprandel and his wife Marie will be emulating Kerouac this summer (but Tom will still be running the ICA show via phone and the Intertubes).  If he's not too busy with last-minute packing, you may have a chance to wish Tom bon voyage!
Posted by Bill Brock at 3:56 PM No comments:

For the answer to this question, see the Kavalek column.

We take turns in chess: first White moves, then Black, then White....  Usually, "having the move" is a big advantage: if both sides are threatening mate, you would like it to be your move! 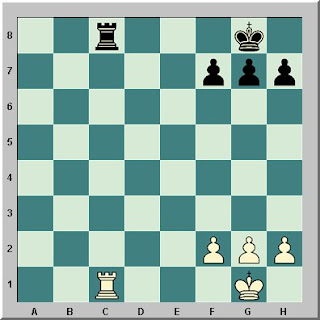 Whoever moves first, wins
I hope it's my turn!

This is particularly true in the opening: when we speak of tempo (plural "tempi"), we're often talking about getting  your pieces into battle more quickly than your opponent does.  Having the move can only help!  If you look at the three Marshall Defense traps that Frederick posted earlier this week, you'll see that White gained one or more tempi by forcing Black to recapture the d5 pawn, then retreat the recapturing piece.  If you move four pieces out with your first moves and I've only moved one piece out, then you've gained three tempi on me!  It's a little more complicated than that, but this gives you an idea....

But sometimes (more frequently than most chessplayers realize), having the moving is a burden, not a privilege. 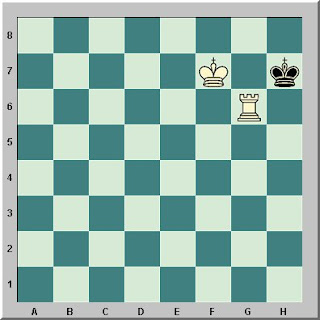 White to play
A complicated position!

I remember trying to explain the king and rook versus king mate to elementary students.  They found this position difficult, so I asked their parents to help.  The parents were confused, too!

First, let's pretend it's Black's move:
Now let's look at the position with White to move:
And now...let's (temporarily) CHANGE THE RULES OF CHESS so that you don't have to move when it's your turn!  (Instead, either player can just say "pass" and skip a turn.)
One could ask the very same series of questions about another complicated position: 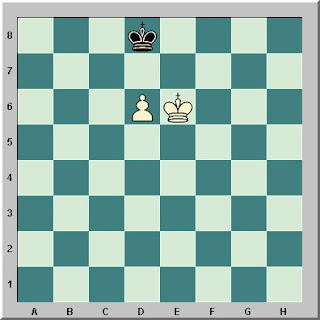 White to play
Another complicated position!

(Remember that the White pawns generally travel "up" the page (or in this case, the screen) and Black pawns travel "down": the queening square for the d6 pawn is d8.)

No answers for the time being: try to figure this out yourselves!
Posted by Bill Brock at 7:09 PM 1 comment:

Not your typical checkmate in three moves

A recent Huffington Post column by GM Lubomir Kavalek used one of my favorite chess problems to illustrate the concept of zugzwang.  (I like it so much that I've posted it on the blog once before!)  The author of this problem is the nineteenth-century French playwright Alfred de Musset. 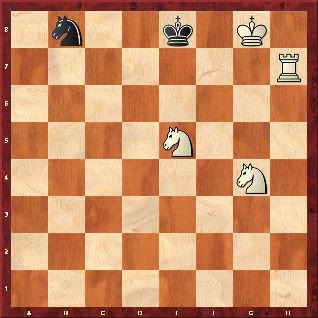 de Musset
White to play and checkmate in three moves

Posted by Bill Brock at 6:17 PM No comments:

A Trap in the Marshall Defense #3

A Trap in the Marshall Defense #2

A Trap in the Marshall Defense #1