As Frederick Rhine reminded us a few posts ago, this "game" is probably a product of the fertile imagination of Carlos Torre, Mexico's first grandmaster.

Former World Champion Alekhine invented at least one game in order to make him look like a greater genius than he already was. Torre, on the other hand, invented a game that he supposedly lost to his friend and patron, E.Z. Adams of New Orleans. Whether this was a true game or a mere "study," it's an incredibly beautiful example of the power of the back rank mate threat. 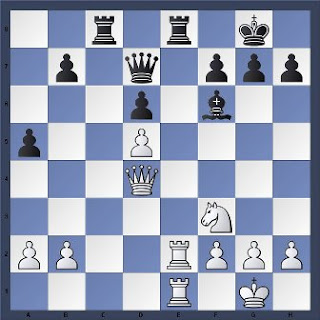 Both players are potentially vulnerable to back rank mates, but White has two big advantages.  His knight on f3 offers protection to the crucial e1 square, while Black's bishop on f6, good-looking piece though it may be, is not doing much to help with the protection of Black's back rank.  Furthermore, it's White's move.  The rook on e8 is attacked twice and defended twice.

What is White's best move?

Can you anticipate Black's best defense?

What move would you play then?

Hint: the theme is distraction from the back rank, and the extra protection of the Re1 allows White otherwise unthinkable liberties.